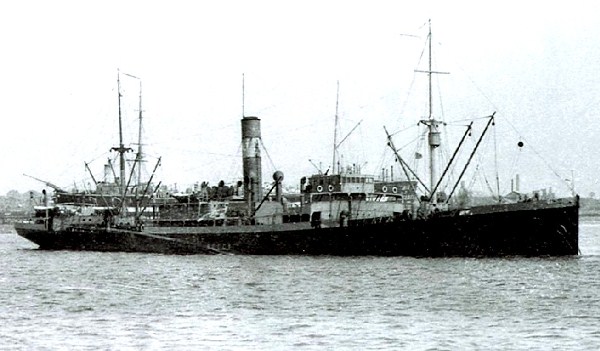 Libertad under her former name Recca. Photo courtesy of naviermatori.net.

The Sinking of the Libertad:

The ship was built in 1921 and was named Recca. It was owned by an Italian company Navigazione Liibera Triestina SA of Trieste. In 1936, it was sold to Società Anonima di Navigazione Italia of Genoa. Then in 1941 it was seized by the Cuban Government and renamed Libertad.  This was after Cuba declared war on Germany and Italy on December 11, 1941.

On December 4, 1943, the Libertad was heading to Baltimore with 8,000 tons of sugar. Having left Antilla, Cuba it made a stop in Miami on December 1, 1943. The Libertad joined a convoy KN-280 which was made up of five tankers from Galveston, five freighters from Key West, patrol yacht Tourmaline (PY 20), and three USCGC cutters (USCGC Argo, USCGC Dione, and USCGC Icarus.) As the convoy headed north, two ships were unable to keep pace with the convoy and were therefore ordered to proceed unescorted to avoid further delay of the convoy on December 3, 1943.

The Libertad's position was moved in the convoy when the two ships lagged behind. Their new position was station #13, which was the last ship of the outermost column on the port side. On the night of December 3 and the early morning of December 4, the weather was rainy and it was a moonless night. The USCGC Dione dropped back on the port quarter to investigate a radar contact yet failed to see the German U-boat U-129.

On December 4, 1943, at 7:30 PM, the U-129 dived after being warned by their radar detector and detected the convoy using their hydrophone (a microphone designed to be used underwater for listening to underwater sounds). Then at 8:57 PM, the unarmed Libertad was hit port side at #4 hold and further back on the port quarter by two of the four torpedoes launched by U-129. The Libertad listed very heavily to the port and sank very quickly by the stern. At the time none of the other ships noticed the attack since it happened so quickly. Only two muffled explosions could be heard and some lights are seen astern. However, this was assumed to have been due to the depth charges dropped by the USCG Dione and USCG Argo who had been sent to investigate and search for any possible U-boats and found nothing. Also, due to it being moonless and rainy weather none of the other ships noticed the Libetad as missing. To make matters worst the commander of the convoy KN-280 had to evade the oncoming convoy NK-581 with a turn to the starboard which added to the distractions.

Due to the attack being so quick, the crew had no time to send distress signals. Also, because of how quickly the ship sank they had no time to launch two lifeboats. Instead, twelve men swam to two rafts and tied them together. Four more men climbed on a capsized lifeboat and at least nine men clung to drifting planks and other wreckage. Knowing they were part of a convoy the men tried to attract attention by waving a flashlight and lighting a sodium compound spread on the water. Unfortunately, it did attract the attention they had hoped it would.

It wasn't until daybreak did the convoy notice the Libertad was missing. At that time USS Natchez (PF 2) and USS PC-564 were sent from Norfolk to search the area. USS SC-1306 and USS SC-1358 were sent to sweep the convoy route ahead of the remainder of the convoy. Three  PV Ventura aircraft from Cherry Pint, a PBM Mariner from Norfolk, a Hall Flying boat from Elizabeth City, and two blimps from Weeksville were sent to look for the missing ship.

At 6:35 PM on December 5, the blimp K-82 located men clinging to drifting wreckage. Their location at the time was 34°40N/74°53W. The blimp dropped emergency rations and a life raft. The men were rescued four hours later by USS Natchez, who also picked up twelve men on the two rafts after they were spotted by blimp K-72 at 34°33N/74°58W.

The four ships (USS Natchez, USS PC-564, USS SC-1306, and USS SC-1358) formed a scouting line in search of other survivors that night, December 5. During their search in foggy conditions, the USS SC-1306 collided with USS PCE-869 and was damaged which took them out of the search and rescue mission.

On the morning of December 6, the blimp K-76 sighted the four men clinging to the overturned lifeboat at 34°44N/74°50W. They notified USS Natchez of their position.  The USS Natchez and USS SC-1358 continued their search that day and into the evening of December 7. They found a good deal of debris and wreckage but found no survivors. All of the survivors were taken to Morehead City, then transported to Norfolk for a hearing. From there they traveled by train to Miami and then returned to Havana via three Cuban submarine chasers.

On December 27, 1943, an article in the New York Times appeared describing the attack. The article, states that at the time "The cause of the sinking was undetermined, but the first report said two underwater explosions were heard in the area about the time of the ship's disappearance." It goes on to describe that on the morning of December 5 two airships, the K-82 and K-72 were dispatched on special patrol, each to search different areas southeast of Cape Hatteras. "The K-82, under the command of Ensign Joseph Hunter, 20 years old, of Washington, DC, sighted the first two survivors clinging to two planks. Emergency rations were lowered and then a life raft was dropped. One man was strong enough to swim to it and drag himself aboard. But he was not able to paddle back to his companion who was too weak to leave his wreckage. A surface craft was signaled and the K-82 hovered overhead until the two men were taken aboard."

The New York Times article went on to state, "Later in the afternoon the K-72, commanded by Lieut. John Marck, 26, of 852 Fifty-fifth Street, Brooklyn, sighted two rafts with twelve more Libertad survivors. The surface vessel was summoned by radio and an hour later these men were on board."

"During the afternoon the third Navy airship, the K-76, under Lieut. David D. Breault, 27, of Los Angeles, was dispatched to the scene. It continued to patrol all night and at 8 o'clock the next morning sighted and overturned lifeboat with four Libertad crewmen clinging to it. The surface vessel, only two miles away, quickly had them aboard."

Another article from the Troy Record reported, "Julio B Cabarracas, an oiler, and Melchor de Leon, quartermaster both of Havana, who watched helplessly as their seven shipmates drowned, said that after 36 hours a navy blimp appeared overhead and dropped a rubber raft containing food and a first aid kit. Cabarracas said that before the blimp dropped the raft, he and DeLeon were surrounded by sharks." The quotes Cabarracas, "We fought them off with our hands and our feet. After a while I got tired, and at that moment a share bit me in my side." The article ends by saying, "Naval physicians who treated Cabarracas said the wound bore teeth marks." 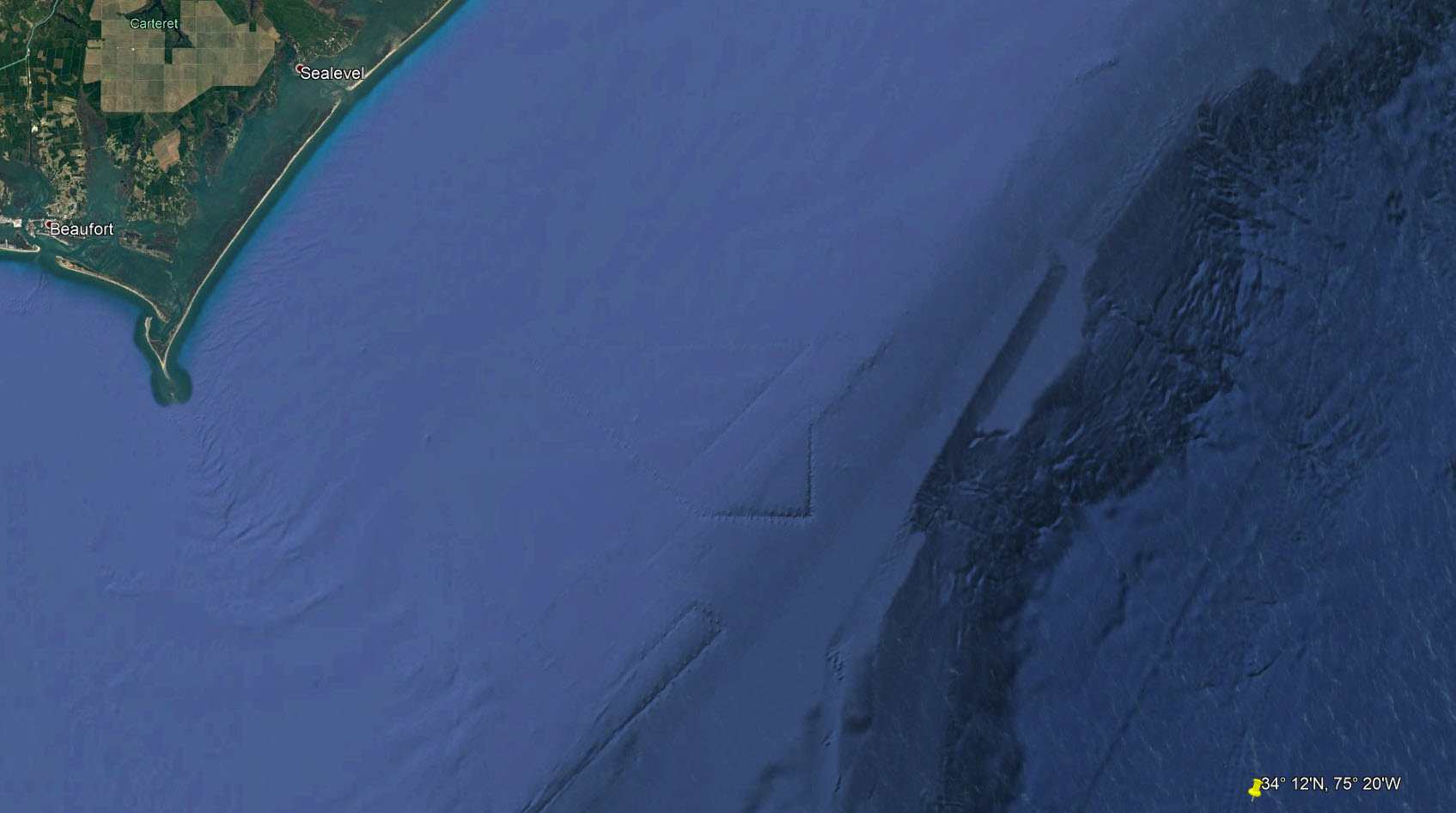