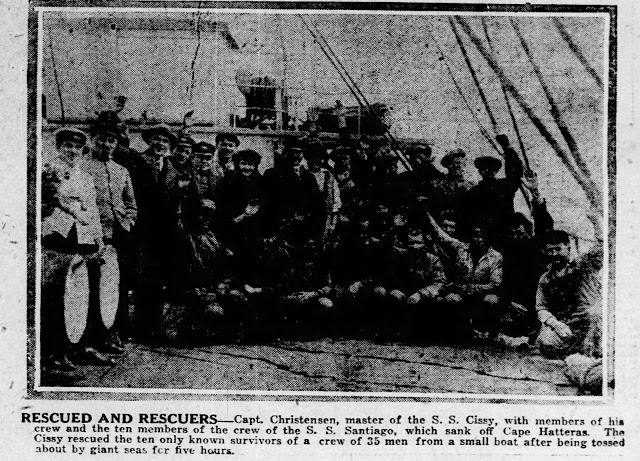 The Sinking of the Santiago:

The freighter, Santiago was operated by Ward Line (The New York and Cuba Mail Steamship Company), a company that operated from 1841  to it was liquidated in 1954. On March 4, 1924, it departed Cienfuegos on the southern coast of Cuba with a cargo of 32,000 bags of sugar. The cargo was loaded from several ports in Cuba including Matanzas on the northern coast of Cuba. Just the week before her final departure, she had run ashore. This resulted in unloading 129 tons of sugar to lighten her load so she could float again. Once the Santiago was able to float again, the sugar was placed back on board. She worked her way around the island to Cienfuegos and now fulling loaded headed for her destination of New York.

Three days into her voyage, the 5,000-ton freighter ran into a severe storm. For the next seventy hours worked her way through heavy seas as the winds grew in intensity. By the night of March 11, while located about sixty miles south of Cape Hatteras one of the hatches broke open and a massive amount of water came pouring into the holds.

Crewmen were sent to pump out the incoming water but due to the amount of water that was rushing in, they were forced to abandon the work. Two officers (first and third mates) thought that the hatch cover was still intact and just needed to be replaced. They moved about the deck in a desperate search for the hatch. Finally having discovered the hatch, the two officers scrambled to retrieve it when a huge wave swept across the deck. A loud scream was heard through the darkness and then the two men disappeared. Their best chance to save the ship was swept overboard.

By this time the holds were nearly filled with water and the pumps were inoperative. At the same time, the engines had stopped and the vessel was beyond control. Knowing that the ship was in a dire situation, Captain J.S. Baldwin had rockets signal their distress in hopes that someone in the area would see them. He ordered the boats launched and gave the order to abandon the ship. At the same time, he lashed himself to the mask.

As the crewmen scrambled to launch the boats, three men were washed overboard. At the same time, one lifeboat was lowered over the side with men aboard.  The sad news was that before it could move away from the ship and into the open seas, the boat was smashed against the side of the steel hull crushing the lifeboat and the men being taken by the sea.

Then a second boat was launched with eleven men aboard. "There was no attempt to man the oars," a survivor reported.  They went on to report that all they could do was "to cling desperately to the gunwales." This boat was able to get clear of the freighter as it sank. It was too much longer when the Santiago rolled over and disappeared with Captain Baldwin still lashed to its mast.

Even though these eleven men were successful in getting aboard the lifeboat for the next three hours the boat drifted in the heavy seas half-filled with water. Then the boat capsized and the men were thrown into the sea. Ten of the eleven men were able to gain hold of the boat while the eleventh man disappeared.

Early in the morning of March 12, 1924, the wireless station at Charleston picked up a message from the Norweigan steamer Cissy. The message stated: "Picked up lifeboat containing six sailors, three firemen, on carpenter from the steamer Santigo, which sank 60 miles south of Hatteras. No other lifeboats seen. Proceeding to Baltimore."

In the end, ten men were saved and twenty-five were lost.

Here is the location of the sinking: Sixty Miles South of Cape Hatteras 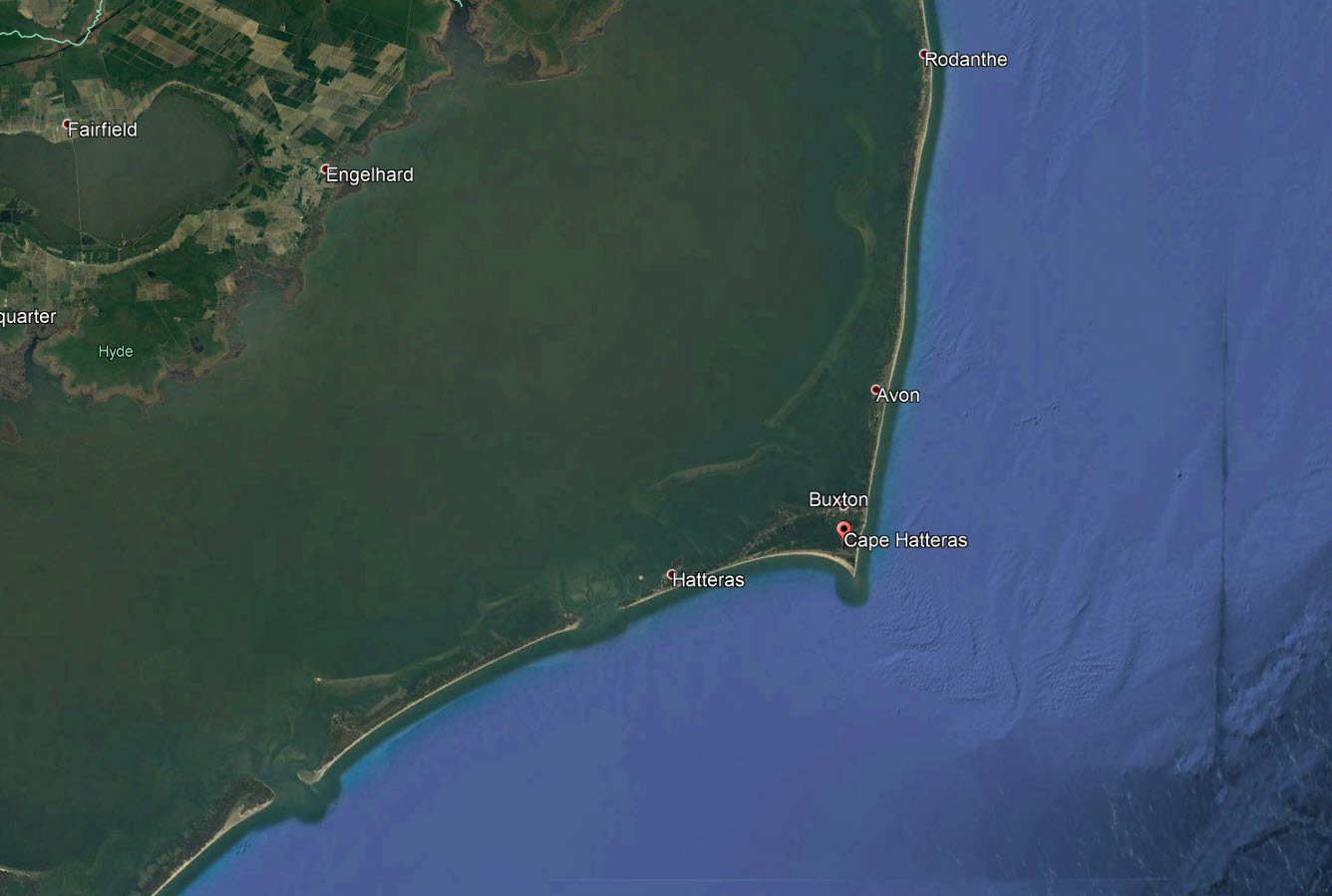