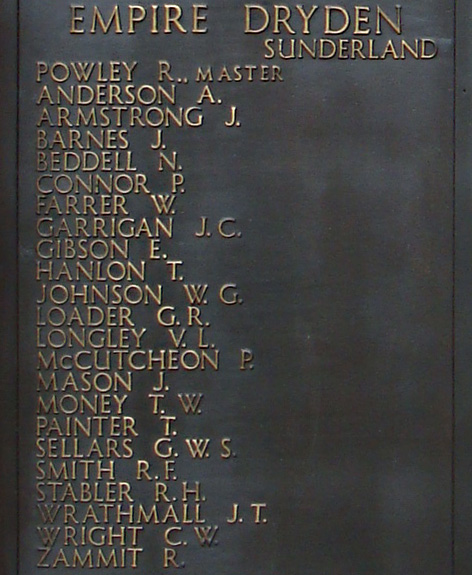 The Sinking of the Empire Dryden:

The Empire Dryden did not have a long life. The ship was completed in February of 1942. Her one and the only captain was Captain Robert Powley. The crew consisted of 51 men, all of which were from England. There were a number of teenagers aboard the ship (see listing below). Six gunners were aboard the ship. The gunners managed the four-inch gun, a 20-millimeter gun, four machine guns, an Oerlikon (a cannon), four PAC rockets, 1 Gymbal projector, and several kite rockets. 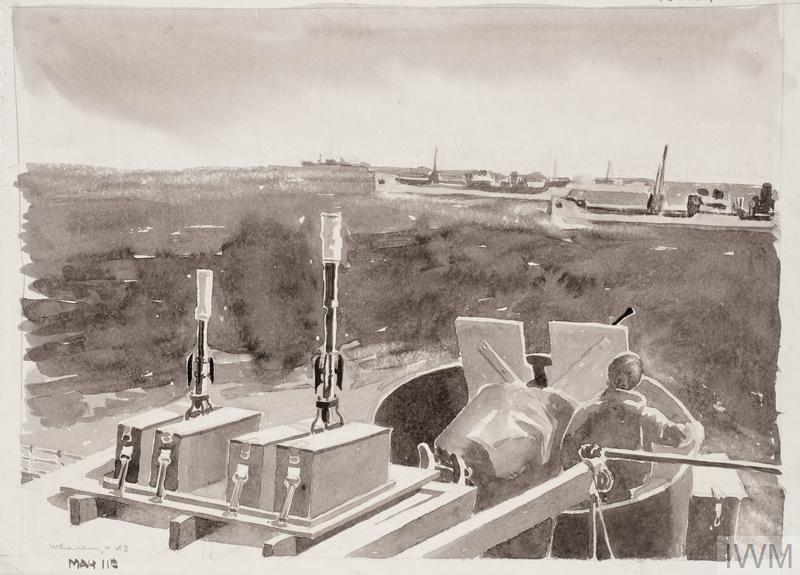 The Empire Dryden began her first voyage on February 27, 1942, when she left Sunderland and joined Convoy FN 642. They were heading to Methil, Fife, Scotland. Once there she joined Convoy EN 53 and arrived in Oban, Scotland on March 4. Then it was on to Loch Ewe and Liverpool without cargo on board. Five days later (March 9), she sailed from Liverpool in Convoy ON 74 and arrived in Halifax, Nova Scotia on March 25. That convoy consisted of 47 merchant ships and 10 escorts.

The Empire Dryden left Halifax and headed to Boston between March 27 and March 29 with Convoy XB 5. She then ventured south, solo through the Cape Cod Canal headed to New York. She arrived in New York on April 1, 1942. There at the New York Harbor, the ship was loaded with 7,100 tons of cargo that included grain and military stores that included explosives that were to be used by Allied forces against Rommel's army in North Africa. The voyage was to be from Cape Town to Alexandria via the Red Sea and Suez Canal.

So this new ship was set for her first big voyage that would take her east of Bermuda. She set sail at 5:30 PM on April 17, 1942.  Early on April 19, about 350 miles southeast of New York and halfway to Bermuda, the Empire Dryden discovered a lifeboat with 21 survivors from a torpedoed and damaged Argentinian ship, Victoria. It had been attacked the day before by the German U-boat U-201. Those in the lifeboat had fled their ship concerned about its possibly sinking. However, the ship stayed afloat and was able to sail to New York arriving on April 21.

Just as the men aboard the Empire Dryden were set to rescue the men on the lifeboat, a lookout spotted the USS Owl (AM 2), a US Navy tugboat towing a barge to Bermuda. The Owl took the men instead. Now aware of the danger of U-boats in the area, the crew continued their voyage south with extreme caution.

On January 19 at 4 PM the Naval Control in Ottawa, Canada gave new orders for the ship to sail west, instead of east, of Bermuda. The radio operators aboard received the orders and took approximately an hour to decode the message. So around 5 PM, their course was altered to 30° to starboard, to south-southwest. By 8:55 PM it was located about 450 miles east of Cape Hatteras. At that time she was traveling at about 10.5 knots and because it was night was traveling in blacked-out condition. They were maintaining radio silence since leaving New York except to receive the plans to change course.

On April 19, the Empire Dryden saw a lifeboat from the Victoria, which had been torpedoed by U-201 on April. Instead of stopping to pick them up, they signaled the USS Owl (AM 2) of their location and continued on their way.

The weather at the time was good and visibility was just as good. Chief Officer Rixham reported that the Empire Dryden was maintaining a steady course. However, the German U-boat that had been observing her since sunset (around 6:30 PM) reported her on a zig-zagging course. At that time there were four lookouts: one in the crow's nest, two on the gun platform at the stern, and either one or two officers on the bridge. To their knowledge, there were no submarines that they could see. However, as mentioned previously, the German U-boat, U-572 under the command of Kapitänletnant Heinz Hirsacker had the Empire Dryden in their sights.

According to the German U-boat's logs the following describes what happened:

At 0:45 German time (6:45 pm local/ship’s time): “Large freighter in sight bearing 330°T.  Target angle 40°.  Enemy bow left.  General course 220°.  Speed 8 knots.  Freighter has 3 large king posts.  Held contact on the freighter up to darkness.  He zig zags 20-30° to port and starboard.  From 02.00 hours I am positioned ahead of the freighter.  After a new zig zag to port I initiate from the starboard side, and shoot at range 600 meters a three-fan.  Target angle 90°, bow right.”
At 3:06 am German time (9:06 pm local time): “Fan is fired at 03.06 hours.  After 40 seconds running time a hit on the bridge.  Freighter breaks apart (in the center).  Foreship sinks immediately.  Stern still floats.  On the stern a there is work by floodlight.  But 12 minutes later the aftership also sinks.   Stern stands high out and then sinks quickly.  2 boats with anchor lanterns remain. Sunk steamer was type “POELAU”.
The men aboard the Empire Dryden stated they heard a "dull explosion." The torpedo struck about 15 to 20 feet under the water line in a cargo hold containing grain. Fortunately for the ship, it hit the hold with the grain rather than the hold holding the explosives. The U-boat had fired three torpedoes but only one of them hit the ship. According to Third Officer Thomas William Money, "reported seeing a flash and a tremendous column of water thrown up." First Officer Rixham state, "It was too dark to see if any hatches were blown up or if there was any deck damage."
The Radio Officers sent out an SSS signal to notify others that a submarine had been sighted. They gave the ship's position and name, yet no one seemed to have received the message. Due to this message not being heard, the crew was on their own. They needed to get to the lifeboats. To make matters worst, the radio transmitter that they had planned to take on the lifeboat "washed off the bridge and smashed by the column of water from the explosion."
The torpedo had hit the starboard side, behind the #2 cargo hatch and severed the bow of the ship. The captain knew they only had minutes left to abandon the ship. The danger was so eminent that the crew from the engine room fled before even turning the engines off. Meanwhile, First Officer Rixham was in the pantry and could feel the explosion beneath him. He moved to the deck and grabbed a life jacket and flashlight along the way. Arriving on the deck, he saw that the forward most lifeboat on the starboard side of the ship was completely destroyed. Seeing this he quickly moved to the aft starboard boat and lowered it quickly knocking off some of the chocks. At the same time, Rixham realized that the engines were still running and the ship moving forward.  With the ship still moving forward it would be difficult to launch the lifeboat and climb aboard.
Getting to the engine room was impossible since fire was overtaking the room. Rixham then tried to use a lever on the boat deck to stop the engines. However, the spindle was bent and was jammed. With the help of other crewmen, they were able to slow down the engines enough so the lifeboats could be launched. In charge of the lifeboats, Third Officer Money waited for Rixham to arrive. When Rixham arrived and got into the lifeboat the ship had sunk so low, he was able to directly step into the lifeboat. By that time, the lifeboat was full of sailors and gunners.
While this was happening, on the port side the captain, was able to launch the forward jolly boat (a boat smaller than a lifeboat). Second Officer David Scott Whittet took charge of the port aft lifeboat. This lifeboat was motorized. The men in the different lifeboats kept in contact by signaling with their flashlights. Approximately, seven minutes after the attack began the crewmen in the lifeboats witnessed the aft section of the Empire Dryden sink to the bottom of the ocean.
So at the time of the sinking, all crewmen had made it to the lifeboats. The following day the small boat (jolly) was taking on too much water. The men on the boat were forced to abandon it and moved to the other two boats. The captain and 25 men were in the motorboat. The Chief Officer and 24 men were in the other lifeboat. The boats stayed close together until the evening of April 21. The boats though separated were still within sight of each other, but then the motorboat disappeared. One theory is that the motorboat was overtaken by gale-force winds that lasted over 44 hours. When the winds began to calm, the surviving lifeboat headed west for about 450 miles until it was discovered by the City of Birmingham by setting off smoke floats and firing red flares on May 5. At that point, their location was 30°37N/77°15W. They were then rescued by the City of Birmingham and taken to Bermuda on May 8.