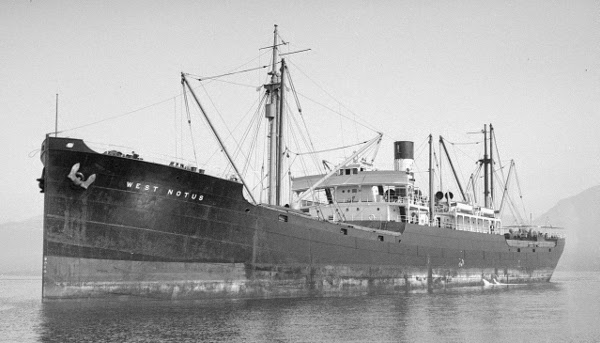 The Sinking of the West Notus:

The West Notus was originally owned by the United States Shipping Board of Washington, D.C. In 1926, it was sold to the Pacific Argentine Brazil Line of San Francisco. Moore & McCormick bought the West Notus through its subsidiaries Mooremack Lines and American Scantic Lines of New York, NY in 1941. When purchased by the Pacific Argentine Brazil Line it appeared numerous times throughout the early to mid part of 1926 in the Oakland Tribune regarding its numerous shipping trips. It first appeared in the February 23, 1926 issue when it was announced that it would begin making trips to South America. In their February 24th edition, it announced that the ship would be arriving back in San Francisco on February 28 from Buenos Aires. The February 26th edition again announced its arrival from Buenos Aires on March 2. Similar articles appeared in the paper throughout the year. An article on August 10, 1926, described its return to San Francisco "spick and span with a full cargo of South American products." It went on to report, "The West Notus cruised nearly 20,000 miles on its round trip Harold Tietjen,  17-year-old son of Captain Tietjen, port captain of the McCormick Steamship company, made the round trip and all hands declare that he is now a seasoned mariner."

Its next big news event appears to have occurred on August 17, 1940, when an article reported in numerous newspapers reported that J. Edgar Hoover announced that Keawe Kamakela, 35, of Hawaii confessed to putting sand in the engine bearings and oil in September of 1939. Laboratory testing showed that the same sand found in the bearings was the same sand taken from beneath Kamakela's fingernails. Later, additional evidence was found to link him to the sabotage. In a separate article, B.E. Sackett, chief of the FBI's New York office, said that Kamakela had thrown sand in the bearings at Port Gamble, Washington because of a grudge against a ship officer. Later news reports from November 13, 1940 state that Kamakela was convicted of the sabotage. The federal court deliberated for 13 minutes. He was then sentenced to two years in McNeil Island prison.

Another newsworthy account of West Notus occurred in September 1940. This is when the officials of the Pacific American Shipowners' Associaton on September 20 asked for help from the National Defense Committee, labor and maritime officials to free the freighter that was tied up in Seattle by "unlawful" action of the Marine Fireman's Union. By the next day, Federal Labor Conciliator E.P. Marsh announced a settlement. The Marine Firemen, Oilers, Watertenders, and Wipers Association demanded that the crew's quarters from the after part of the ship to amidship. The McCormick board of directors agreed to this demand. The West Notus was then to proceed to Puerto Rico after loading at Puget Sound.

The ship made three trips from New York in 1941. They made another trip from New York on February 26, 1942. On its final journey in May 1942. Aboard the ship was Captain Hans Gerner along with 39 crew members. Out of the total of 40 men, five of them were military gunners. Docked in Bahia Blanca, Argentina the ship was loaded with 7,400 tons of flaxseed. It then made a stop in Trinidad for bunkers and then headed up to New York on May 24, 1942. On May 31, the U.S. Navy radioed a change of routing instructions to the captain.

At approximately 5 AM, Korvettenkapitän Otto von Bülow from German U-boat U-404 noted in his war diary, "Steamer in sight bearing 160°. Target angle bow right 45°, range=4000 meters, coming out of the morning mist. it is too bright for a surface attack,in addition the clear horizon is behind us. At this range the target angle is already too great for a submerged attack. Diving unseen diving to maneuver ahead late at the limit of vision submerged attack already appears questionable and not promising given the strong zigzagging expected from the experience of sinking ALCOA SHIPPER." Two minutes later, he wrote that they were now ready and the U-boat was heading to meet the ship. Rather than an attack using torpedoes, the captain instead used their deck gun. He went on to state, "She was attacked by our deck gun, as I had not enough fuel on left on board to overtake her and find a position from which to fire the torpedoes” von Bülow also noticed the large cannon on the West Notus' stern as well as machine guns.

At 5:21 AM the submarine opened fire from 2,200 meters away. von Bülow reported, "After 2 far and 2 short hit on the bridge observed. Steamer turns away 50° and opens fire with his cannon. The first impacts lie far behind the boat. [Machine gun] C 30 broke down after a few shots, the cocking lever is broken again. The range is too great for effective suppression with the [machine gun] C 34. There were continual hits on the steamer and already good fire effects observed. On 2 well-placed impacts ahead of the boat turned away with …hard rudder.”

As the attack started, Captain Gerner went into his cabin to get his documents and secret papers. As he entered his cabin, a shell struck his quarters. He came out of his cabin, staggered to the rail, and ordered his men to abandon ship. A few minutes later he collapsed and died. Witnesses said he lasted three minutes after giving those orders. At the same time, a Radio Operator was killed and the equipment was destroyed so there was no time to radio a distress message.

Able-Bodied Seaman Charles K. Toguchi, from Hawaii, related “I was at the wheel when the fight began and although we had some machine guns, they were no match for the sub’s 20-mm cannons. Shells began hitting the wheelhouse and the captain’s cabin, but I was not hit. Soon the captain blew the whistle and gave the order to abandon ship and the crew got into two lifeboats”

Chief Engineer Edwards ran to shut off the engines while the crew headed to the lifeboats. As one lifeboat was being lowered it was hit and burst into flames. Two other lifeboats located starboard were launched. The Chief Engineer and seventeen crewmen got into one lifeboat. Chief Mate Kat, twelve members of the crew, and the five gunners climbed into the other lifeboat. The gunfire coming from the U-boat killed Third Mate Morris, Radio Operator Clarkson, and Assistant Engineer Williams. The time of evacuation for the remaining 35 crewmen was 7:30 AM.

By 7:25 AM, U-404 had ceased fire and was preparing to dive. However, von Bülow saw that the West Notus was on fire, had blown off engine steam, and the ship was empty. At 7:33 AM, U-404 approached the ship again and notice the ship was making headway and turned to the starboard. The U-boat then opened fire again from 1,800 meters easily hitting its target. Seven minutes later, 19 minutes after the initial attack, the ship was on fire from stem to stern. At that point von Bülow records:“Cease fire!  Drove around the steamer, no more people aboard. On the stern and bow badly painted over name: “WEST NOTUS” could be read.  U.S.A. steamer 5492 GRT. Pacific Argentine Line.”

At 8:15 AM the U-boat was brought about 3,000 meters from the ship. By that time the ship's gunners had damaged the submarine in two places; the port exhaust piping and the stern covering the deck's torpedo canister. By 9:00 AM, von Bülow noted that "Steamer has a slight list. Flaxseed flows from many shell holes just above the waterline. 10 further shots of explosive munition are fired from the immediate vicinity into the water line."

At 1:00 PM von Bülow logged that "During the repairs a lightly wounded American seaman was fished out and brought to sailing lifeboats." At 1:15 PM the Germans saw the ship's ammunition detonate, throwing a high column of flame.  Two and a half hours later the U-404's gunners pumped six more shots of explosive shells into the ship at the waterline. Even after all this and the previous attacks, the ship didn't sink. After 13 hours of the attack, von Bülow decided to change tactics and blow up the ship with satchels of explosives fixed to the sides. His records indicate "By driving up and throwing a grapnel, an explosive cartridge was affixed to the side of the steamer's hull and initiated. However, there was no detonation, probably the rope holding the charge was burned on the hot side of the hull." It appeared as if the West Notus was a tough ship that wouldn't go down easy.

At 2;15 AM on June 2, the sub dove to test the repairs that were made. After forty-five minutes of testing, it surfaced to see that the ship was still floating. New charges were set on the side of the ship's hull. This attack sunk the ship deeper, yet it still remained floating. The U-404's men continued with repairs of the submarine and trying to sink the ship. Finally, at approximately 1:00 PM, some 32 hours after the attack began, von Bülow wrote "Wreck still smokes strongly. Is observed to sink deeper, submerging more of the shell holes." An hour later lookouts on the U-404 saw the Swedish ship Anna and moved off to attack, leaving the West Notus to slowly sink.

With all of this activity between the U-boat and West Notus, there were two lifeboats with 18 survivors in each one at the same time. In one boat Second Officer Pieter J. Sas was in command. Onboard with him were injured sailor Francis J. Sherlock, who suffered from a shrapnel wound as well as Filipino Democrito D. Hortelano and two Puerto Rican messmen; Julius Morales and Manuel A. Perez. In testing the water, Chief Engineer Edwards found that the water was stale and should have been refreshed every 15 days. With the water being stale it gave the indication that the water hadn't been exchanged. Apparently, the sails were dark red, resembling a submarine conning tower, which most likely scared away an Allied ship that quickly turned course and ran when it saw the lifeboat.

The second lifeboat in the command of Second Officer Sas spotted an airplane on June 2, To them, it appeared to be a Clipper amphibious plane. Unfortunately, the plane didn't see them. Finally, at 8:40 AM on June 4 the men were found by the Swiss merchant ship SS Saentis. The position given by the Saentis for the rescue was 132 nautical miles south-southwest of the sinking location, so the lifeboat achieved roughly 1.5 knots. The Saentis delivered the crew to New York the following day, at 6:43 pm on Friday the 5th of June. (The position for rescue was 35.10N, 71.47W versus 34.10N, 68.20W for the sinking).

The rescued men told US Naval authorities that there was still another lifeboat out there. However, the other boat was more fortunate. On June 3, after three days in the lifeboat, they were rescued by the Greek Merchant ship Constantinos H. The ship took the men to Bermuda where they landed on June 5. On June 14, all of the men were reunited in New York.