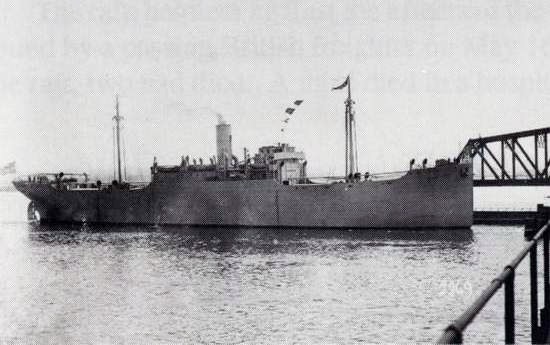 The Sinking of the Empire Thrush:

Originally built for the U.S. Maritime Commission to serve as a cargo transport during WW I, it served under the name Lorain. It continued its service through the twenties until it was finally placed in Baltimore in1929 as part of the reserve fleet. Twelve years later, she was turned over to England in accordance with the Lend-Lease Act. So in May of 1941, she started her new life as the Empire Thrush.

In April 1942 it left Tampa, Florida with a cargo of 2,500 tons of rock phosphate, 745 tons of TNT, 60 tons of citrus concentrate, and 2,500 tons of citrus pulp. On April 14, 1942, the Empire Thrush followed a zigzag course north along the North Carolina coast. It was in the process of meeting a transatlantic convoy which was to meet in Halifax, Nova Scotia. On the deck, there was a gun mounted, so it was referred to as a British armed merchantman. There were also two twin Marlins and two single Marlins. Besides her armament, there were six lookouts on duty; one in the crow's nest, one in each of the bridge wings, one on the poop deck, and two on the after gun platform.

That April 14 morning the day started as a clear and sunny day with a mild northeasterly wind. The ocean was calm and visibility was good. But by 9:30 AM the situation changed dramatically. A lookout spotted a torpedo launched by German U-boat U-203 come to the surface on the starboard side. He attempted to send out a warning but by then it was too late. The explosion blew in the hull of the #5 hold. The rock phosphate muffled the sound, but the hatch cover was blown off, the deck buckled, and a hole was torn in the freighter's side.

The captain, George Frisk knew with the TNT in an adjacent hold the ship was in real danger. He immediately gave the orders to abandon the ship. All secret codes and papers were put in a tin box, punched with holes, and thrown over the side of the ship. Within ten minutes all fifty-five men were safe aboard four lifeboats. Due to the radio being damaged in the explosion there was no SOS sent out. Fortunately for the crew, four Coast Guard patrol boats were in the area. They immediately began to drop depth charges in the area.

One Coast Guard vessel approached the lifeboats to check on their status. Since no injuries were reported, it returned to its search for enemy U-boats. The men in the lifeboats watched from afar as their ship sunk lower into the water. Two hours after it was first attacked, the Empire Thrush sank to the bottom. Only her funnel and masts could be seen above the surface of the water. Then ten minutes after witnessing her sinking, the men were taken aboard the tanker Evelyn and landed in Norfolk, Virginia.

However, this was the end of the story for the Empire Thrush. According to the Navy, "The superstructure and rigging were broken up slowly by the action of the sea until some time in the summer of 1942 the last remaining mast disappeared below the surface." The remains of the ship were relocated by the USCG Gentian on June 29, 1944, and again on July 7, 1942, due to the remains being a "menace to navigation, the least depth being about 29 feet."

A spectacular demolition was to have occurred based on the Navy Salvage Service which utilized the cargo of TNT to accomplish the demolition. When the Gentian returned on July 24, all that was left was a 30-foot hole where the wreck used to be. The demolition and the wire drag now left the wreck at a depth of 42 feet.