The Sinking of the Cassimir

The day the Cassimir collided with the steamship Lara and sank was not the news story of the day. Earlier in the day a u-boat attack off the New Jersey left the tanker R.P. Resor in a large blaze and numerous fatalities gaining the headlines of the day.

The Cassimir was on its way to Baltimore from Cuba and was transporting molasses to be used in the rum-making process. In February of 1942, Captain J.A. Bodman and his crew of 36 left Santiago, Cuba for the return voyage. On the morning of February 26, 1942, the Cassimir was moving through a dense fog about 50 miles east of the tip of Frying Pan Shoals. Also moving through the fog was the freighter, Lara. The ships were unable to change course and the bow of the Lara ran full speed into the starboard side of the Cassimir at amidships. The Cassimir was split at the engine room and personnel on duty at the time were either crushed or drowned as the water came flooding in after the Lara backed out.

The Cassimir started to list to starboard and Captain Bodman gave the order to abandon ship. Two lifeboats were launched and all but six of the crew (two men were missing and four bodies were recovered) were rescued by the Lara, which didn't have any damage from the collision. The thirty-two survivors were taken to Charleston, SC. However, First Mate E. Heyliger died of his injuries shortly after rescue.

The Cassimir floated toward the north for a few hours before she finally slipped beneath the surface of the water.

Today, several divers have described this site as a "must-see" dive site. Gary Gentile is his book, Shipwrecks of North Carolina from Hatteras Inlet South, as being "visually spectacular." The nc-wreckdivng.com describes the site: "with the stern towering above you, it was one of the prettiest wrecks off of North Carolina. " 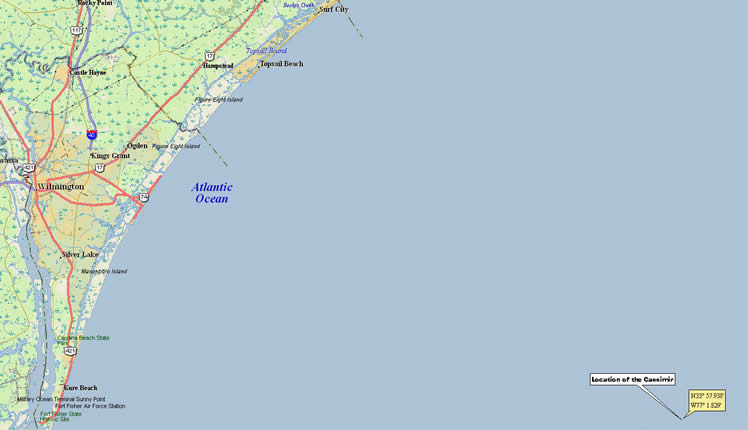