The Sinking of the City of New York:

The sinking of the City of New York was the second ship with this name. The first one was a wooden-hulled screw steamer that sank January 15, 1862, during a gale somewhere in Hatteras Inlet.

It was 7:36 PM on March 29, 1942 (Palm Sunday), when the unescorted City of New York was hit by one G7a torpedo from the German U-boat, U-160 about 50 miles east of Cape Hatteras. Traveling on 24-foot seas at about 14 knots (approximately 1.1109 mph). It only took about 29 seconds from the launch that it took the torpedo to strick on the port side just below the bridge. In the process, it destroyed one of the lifeboats. The helmsman brought the ship into the wind and the watch below secured the engines. The ship had guns mounted on the poop deck (a deck that forms the roof of a cabin built in the rear, or "aft", part of the superstructure of a ship) and armed guards fired twelve shots with the 4-inch gun at the periscope. The U-boat circled around to the back of the boat (stern) at about 250 yards away and fired off another torpedo that struck the starboard side causing the ship to sink by the stern about 20 minutes after the first hit. During this attack, 13 officers, 69 crewmen, and 42 passengers abandoned the ship in four lifeboats. The fifth lifeboat overturned during launching. The nine men at the guns followed them by jumping off the ship and swam to the boats or two rafts that floated free.

The following day a rescue team was sent out in search of the sunken ship. The first searchers were two USAAF bombers and the USN PBY Catalina flying boat without success. The USS Greer and USS Roper were also sent to search for survivors. They were able to pick up 70 survivors (60 men, 6 women, and 4 children) from two lifeboats and two rafts. They were found at 35°41N/73°39W between 12:10 AM and 4:30 AM on March 31, 1942. Unfortunately, one of the crewmen died on board after being rescued. Twenty-six other survivors, including the master, were picked up on the USS Acushnet and were taken to the Naval Base in Norfolk Virginia.

On April 11, during the morning a USAAF bomber spotted the fourth lifeboat with 13 crew members, an armed guard, and six passengers (4 women, one man, and a 3-year-old child). However, 5 crew members, the guard, the man, and two women died of exposure. The USN blimp K-4 kept an eye on the boat during the afternoon and directed the US Coast Guard boat USCG CG-45 to the boat. The boat rescued the eleven survivors and two bodies (mother of the child and armed guard), who died a few hours before the rescue. This boat was found at 38°42N/72°58W. The rescued group was taken to Lewes, Delaware.

In total, 16 crewmen, one guard, and nine passengers died.

An interesting twist to the rescue was one of the passengers was Desanka Mohorovicic, the pregnant wife of an attaché to the Yugoslav consulate in New York, who traveled with her daughter Vesna (age 2). She was a Yugoslavian woman who departed from South Africa to reunite with her husband. At the time she was eight and a half months pregnant. Months before her family had escaped from their homeland to escape the invading armies of Hitler.

Twelve hours earlier, Desanka had been warm and dry aboard the 452-foot-long passenger-freighter, the City of New York, inbound to the United States from Cape Town via Port-of-Spain, Trinidad. They had traveled 7,600 nautical miles since Cape Town and had 330 miles to go — just 24 hours. But the ship had yet to run the U-boat gauntlet off Cape Hatteras, a heavily traveled ocean passage described by the U.S. Navy in the spring of 1942 as “the most dangerous place for merchant shipping in the world.”

According to an article appearing in the New York Times dated April 2, 1942, Leroy Tate, a seaman, said that the lifeboat in which the pregnant mother was placed pulled away from the ship's side came close to not making it. "Just as we left," he said, "the second torpedo passed just in front of us. I thought sure as hell it was going to his us." He stated that the ship's gun crew fired shells over the lifeboat at the submarine. Apparently, the ship's officers arranged in advance that if the ship was attacked the pregnant woman would be placed in the same lifeboat with the ship's doctor. Altogether, Desanka, the doctor, the purser, and two other women were among the eighteen passengers and seamen in the No. 4 lifeboat. They went into a lifeboat together after the ship was torpedoed, but while waiting for rescue she went into labor. Luckily the ship’s surgeon, Leonard Hudson Conly, had followed her into the same boat and delivered the baby in the bottom of the lifeboat that was tossed about in 15-foot waves, even though he himself had two broken ribs. Dr. Conly, who delivered the baby, said he broke his ribs in a fall in the lifeboat. He released his grip on the man-rope as his feet touched the lifeboat seat. At the same time, the boat dropped between two swells and he fell into the boat. Because of the timing of the attack, he had no time to get his medical bag. Two torpedoes had just struck the ship as he headed off the boat. The baby was born thirteen hours after the survivors were placed in the lifeboat. They were rescued by USS Roper the next day and the mother decided to name her son Jesse Roper after the namesake of the destroyer that picked them up. In another article in the New York Times dated the same day, Desanka said, "Everyone was good to me." She stated that after the baby was born she placed him inside her dress to shelter him from the cold. Her legs were badly bruised when she fell while making her way to the deck with her daughter, Visna, in her arms after the torpedoes struck. The crew of the rescue shipped raised $30 and presented it to her. The surviving passengers increased the gift to $210. The Naval Relief society, through its branch at the Norfolk Navy Base, provided a layette (a set of clothing, linens, and sometimes toiletries) for the baby.

Another survivor Jack Roy Rodriguez of Boston said a school of sharks swam continuously around the life raft on which he and seven others were aboard. "We beat them off with our ours," he said. Another crew member, Quatermaster Americo Rodriguez of Lowell, MA, said five lifeboats were launched from the ship which went down in twenty minutes. He reported his boat was capsized by a column of water caused by the explosion of the second torpedo. "There were two women and one child in my boat," he said. "After the boat capsized they had disappeared. I found a life raft and climbed aboard it. Several persons were in the water nearby, including a woman and a little girl. We helped them aboard the raft."

Chief Radio Operator Albert Viada of Asotria, R.I., said that the door to his cabin was jammed by the blast of the first torpedo and he had to kick his way out. Once out he got to the wireless room where he found the explosion had wrecked all of the sending keys and three of the four transmitters. He patched together an emergency set and by using two pieces of broken wire tapped out a call for assistance. He boarded a raft with nine others after abandoning the ship. The men on the raft saw Mrs. Richard Wrigley Jr. of New York in the water and tried to reach her. Viada said, "the waves carried her away."  Her husband and daughter, Irene, were among the survivors.

One final fact was an official of the Yugoslav Consulate said that  Desakanka Mohorovicic's husband had been on a ship that was torpedoed and arrived two weeks prior on a rescue vessel. 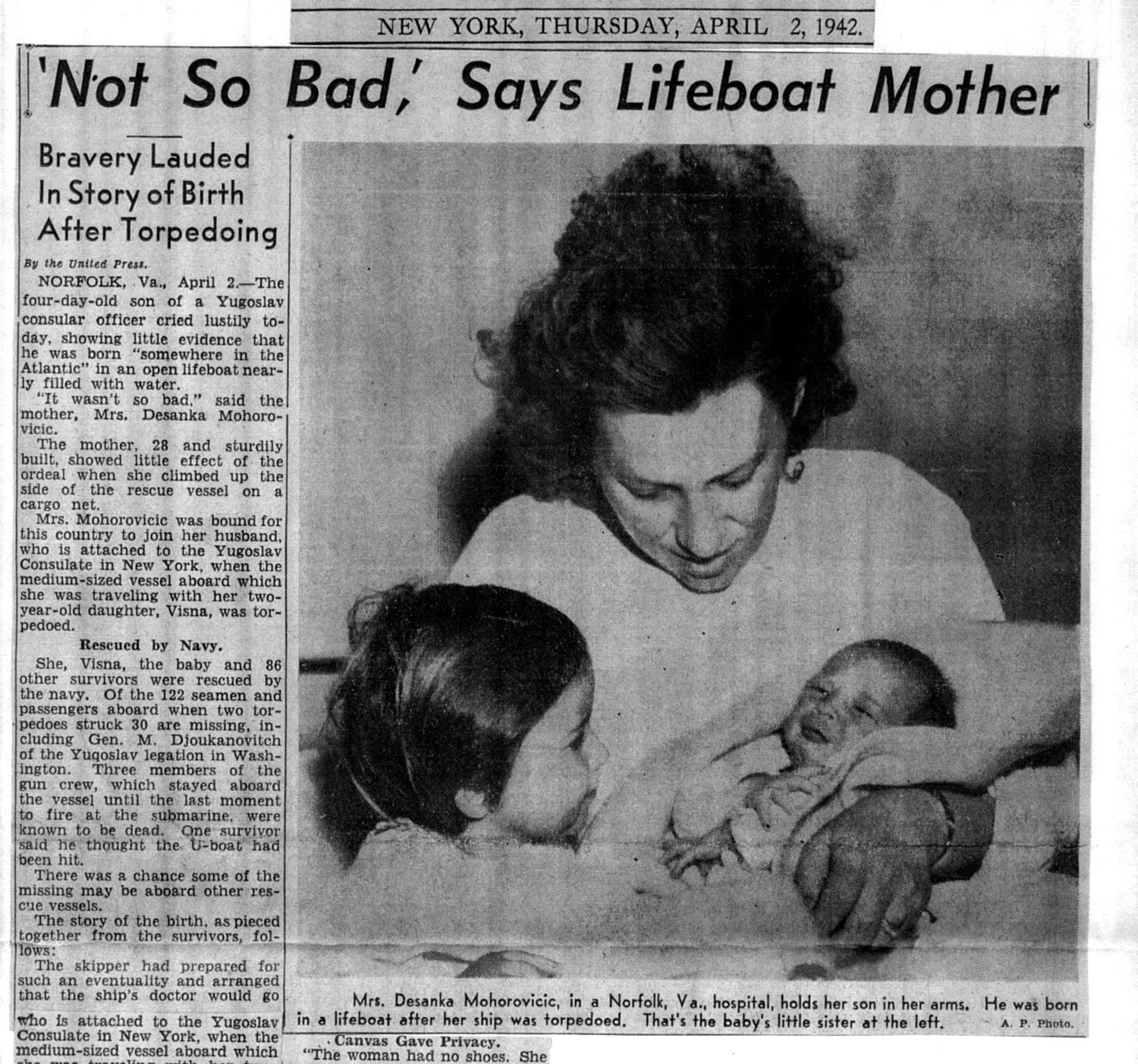 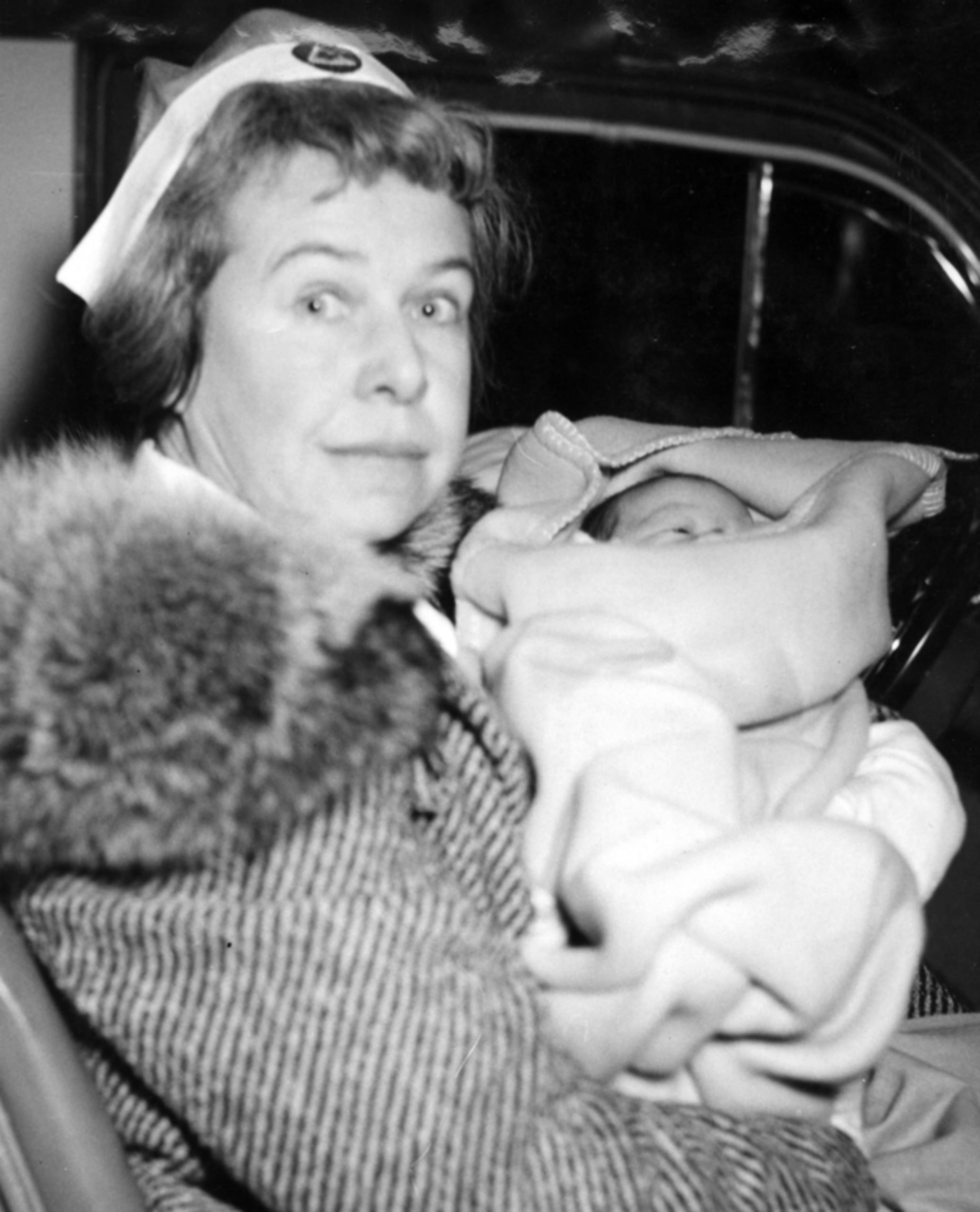 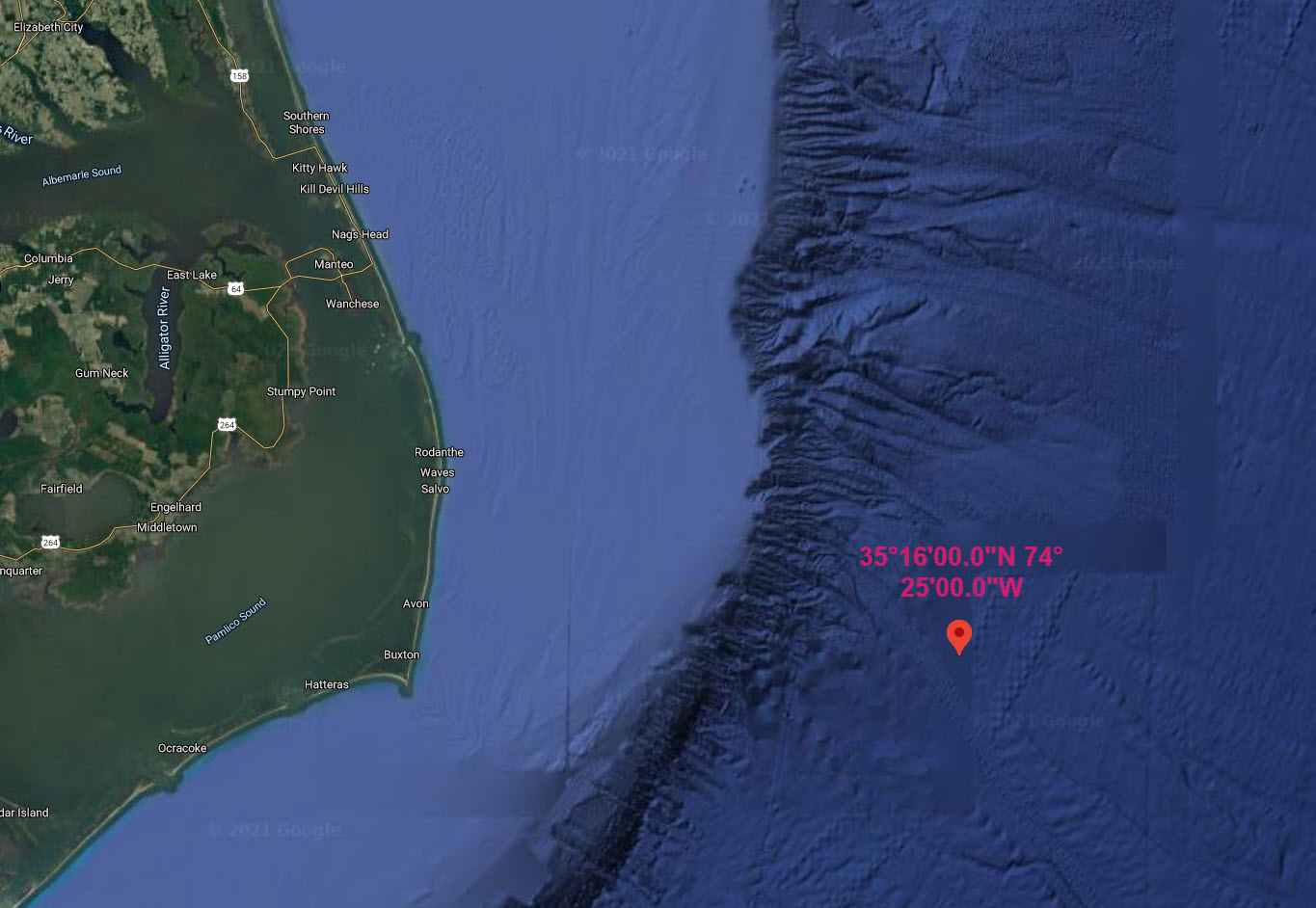