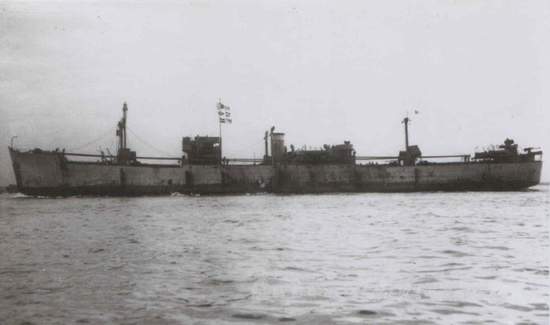 The Sinking of the Belgian Airman:

Originally known as Empire Ballantyne, she was built for MoWT and managed by WA Souter & Co. Ltd located in Newcastle upon Tyne. On February 14, 1942, she was transferred to the Régie de la Marine of the Belgian Government and took the name Belgian Airman. At that time she was managed by Compagnie Maritime Beige located in Antwerp.

The Belgian Airman was a member of a number of convoys during the war. On January 12, 1943, as a member of Convoy ON 162, she left Liverpool and arrived in New York on February 11. Their captain, Captain H.C. Birmie was the head of the convoy of ships on this voyage. On a return voyage to Liverpool from New York, she was a part of the Convoy HX 229. They departed on February 28, 1943, and arrived in Liverpool on March 15.  On the way, March 4 at 1:50 PM at 44° 15N, 59° 44'W,  it separated from the convoy and proceeded to Halifax, Nova Scotia to reduce the size of the convoy to 60 ships. From here it connected with Convoy HS 229A, which had left New York on March 9, 1943. Belgian Airman joined the convoy in Halifax on March 12. During this voyage, she was carrying a cargo of steel and timber. During the voyage, it struck ice and was diverse to Reykjavik, Iceland,

On April 8, 1945, the Belgian Airman left Houston headed to New York and Antwerp, Belgium.  Onboard was a cargo of sorghum and dairy feed. At 8:50 AM on April 14 the unescorted Belgian Airman was about 70 miles northeast of Cape Hatteras when it was torpedoed and sunk by U-857. One crew member was killed in the attack. The forty-six survivors were rescued by the American Liberty ship Harold A. Jordan.  The survivors were taken to New York.