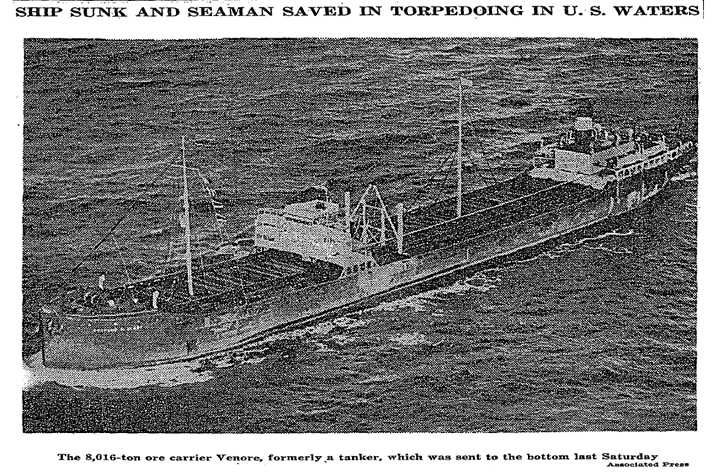 Venore Prior to Its Sinking - AP Photo

The Sinking of the Venore

According to rescued crew members, the sinking ot the Venore was done in a very sinister way. The German Uboat masqueraded as a lightship and blinked a coded message for the Venore to come closer. When the Venore did, a fatal shell and two torpedoes struck the vessel. According to Seaman Herbert Clark of Boston stated: "If we had only had a gun, I would have taken charge of it myself and blasted that sub out of the water." Fifteen of the missing crew members were from the United States. There were also crew members were from Sweden, Portugal, England, Spain, Estonai, Holland, Honduras, and the Phillippines.

The Venore originally was an oil tanker, previously known as the G. Harrison Smith. The ship originally left Baltimore on December 16, 1941, and had picked up her cargo of 23,000 tons of iron ore at Cruz Grande, Chile.

The master of the vessel, Captain Fritz Duurloo, was one of the missing crew. A Navy spokesman state the Venore was fully aware of the dangers in the Atlantic and was racing at top speed for port when the submarine picked up her course. An SOS from the Venore's radio operator at 12:47 AM flashed: " Two crashes so far. Will keep informed. Think swimming soon." Two minutes later a second message came through: "Torpedoed twice. The ship still afloat, but listing badly. The captain requests assistance immediately." At 1:22 AM, the last message came: "Cannot stay afloat much longer." The radio operator, Vernon W. Minsye of Mobile, Alabama was among the missing.

When survivors arrived in Norfolk late the following day, they related the worst part of the whole attack was witnessing a lifeboat loaded with more than fifteen men go down when hit with a heavy wave. They were unable to go after the other men due to their own lifeboat being overloaded and taking on water. The third lifeboat with two men disappeared into the darkness.

Allen Horten, able-bodied seaman from Baltimore reported he was in the crow's nest when light was sighted. "The light blinked in a code that the vessel was a lightship. She told us to come over near her. We started toward her, still thinking she was the lightship when a shell hit us in the bow. It didn't do much damage but we were called to our stations. Then the submarine moved around to our port side and a torpedo hit us. A general alarm was sounded. That sub, when it circled us that time, signaled with her lights as if she were a buoy. But when the second torpedo struck us we were as ready for it as you can be ready for such a thing."

Horten later went on to report those in the lifeboat hugged the bottom of the lifeboat for fear the submarine crew might rake them with additional fire. They were also afraid to use their oars to move them closer to the shore because the "sub kept hanging around," so they lay low for a while and drifted.

Another survivor, Fireman Eldar G. Driver of Nacogdoches, Texas said that those in the lifeboat sighted some ships during the long stretch adrift, but "they didn't see us, or didn't want to see us for fear we had a sub on our trail." 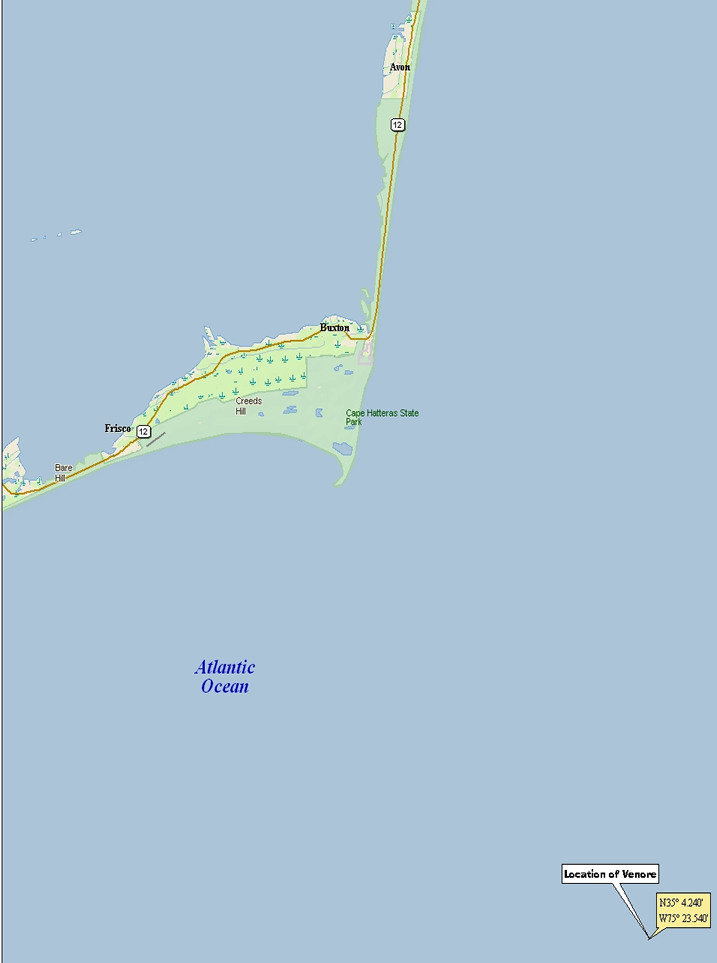 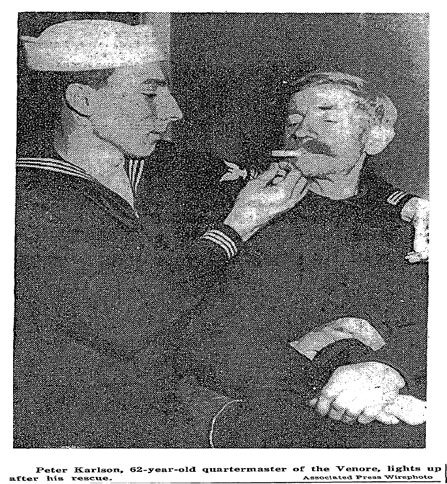