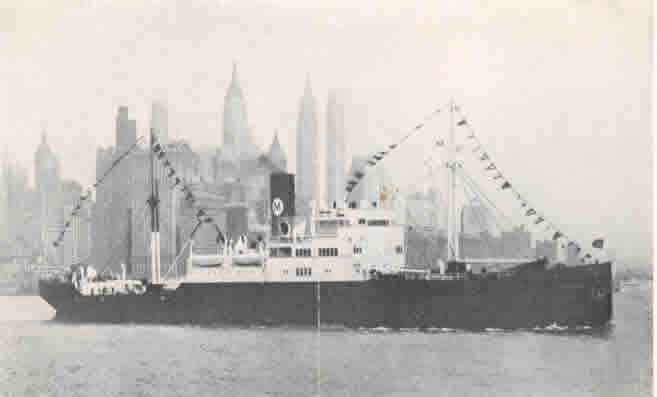 A photo of the Buarque, when it was called Scanpenn

The Sinking of the Buarque

The Buarque was originally named the Shepaugwhen its keel was first laid on September 11, 1918. When the ship was launched on August 15, 1919, it was renamed Bird City. In 1932, it was renamed the Scanpenn. On October 30, 1939, the ship was detained by British authorities at Kirkwall, Orkneys for thirteen days and then released. In 1940, the ship was sold to Brazil and renamed Buarque. An articlein the New York Times, dated September 21, 1939, spoke of its' eminent sale.

The Buarque began its final journey in January 1942. Starting in Rio de Janeiro she made several stops on her way north towards her final destination of New York. Picking up cargo in several ports along the Brazilian coast. Her final stop was in Belem where she picked up her final passengers. The total number aboard the ship were eighty-five people (seventy-three officers and crew along with eleven passengers). The captain of the vessel was Joao Joaquim de Moura. Since Brazil wasn't involved in the war at that time, she sailed without worry. On her hull, Brazilian flags were painted and Brazilian ensign flew from the taffrail being illuminated by a floodlight. According to international treaties, the ship had nothing to fear about attack considering that it was a neutral country. The only concern might have been that Brazil had severed diplomatic relations with Nazi Germany.

When the ship sighted a submarine off Wimble Shoals reportedly at 7:00 PM Saturday, the captain did not panic as the U-boat came within two hundred feet off the Buarque. After several anxious minutes, the U-boat(U-432) headed north and soon disappeared out of sight. At that point, the captain believed they were safe and out of danger.

A New York Times, February 18, 1942, article told of the attack. The article started off by describing a 5-year-old boy who survived eighteen hours aboard a lifeboat being seasick, cold, and wet. Passengers praised the courage of the boy, Fredrick Ferreira, son of Mr. and Mrs. Adrain Ferreira of Newark, New Jersey. Mr. John P. Dunn, of 16 Charles Street, New York, a Pan American Airways construction engineer, said that in their lifeboat "Freddie became seasick; he was cold, wet and cramped, but he didn't complain and he smiled when anyone spoke to him."

Walter F. Shivers, of 16 Commerce Street, New York, who was a Pan American Airways "trouble-shooter" stated the Buarque had "the Brazilian insignia painted on both sides, and an illuminated sign pointing to the insignia should have been visible at some distance."

Mr. Dunn went on to explain that shortly after the second torpedo struck the ship's boilers exploded and she sank "within 30 seconds." He added "There was a terrific screaming sound as the water rushed into the ship's open spaces. I think she was ripped in half by the explosion." He also reported that no general alarm was sounded aboard the Buarque after the torpedoing. "We never received an order to abandon ship. I don't know whether everybody got off."

Mr. Shivers said: "A young tidal wave followed the explosion almost swamped our lifeboat. The screaming of that sinking ship was almost human. It was the most eerie sound I've ever heard. It made my blood run cold."

Other passengers aboard were Mrs. Graciela Omana and her teenage daughter, Marie Louise, who were en route from their home in Caracas, Venezuela, to visit relatives in New York. Mrs. Ferreira was en route to Newark to join her husband, who had come from Para, Brazil several weeks ahead of her.

Mr. Dunn, who was returning from working on airport development in Belem, Brazil, said he and Mr. Shivers were sleeping in their cabin when the first torpedo struck the bow on the starboard side. "I put on my shirt and pants and ran on deck...I saw Mrs. Ferreira and Freddie in a lifeboat. She told me she had left their cabin without lifebelts. The ship's electricity had gone off when the first torpedo struck. I went to Mrs. Ferreira's cabin and got two lifebelts and blankets. I also got blankets from my cabin. I dropped the blankets and lifebelts into the number four lifeboat and got in it myself. There were eighteen of us in the boat. We had pulled about 100 yards away from the ship when a second torpedo struck amidships. We didn't see the submarine. The ship started down by the bow. The boilers exploded and she sank within 30 seconds. We were leery of showing lights because we didn't know whether the submarine would machine-gun us. Later, however, we showed a flashlight and we saw flashlight beams from two other lifeboats. We remained in communication for a while. Then the boats became separated. After daybreak Sunday we saw the boat containing the two Venezuelan women. We were close together all day but not close enough to get some of the cognacs they had aboard. We alternately rowed and drifted until 7 A.M. Sunday, when we sighted two Navy planes. We waved. they waved back and took our pictures. We assumed the Navy had picked up the Buarque's SOS. We thought we'd be picked up shortly after the planes sighted us, but the rescue ship didn't arrive until late Sunday. We were never without planes above us, though, after the first two found us."

Fortunately, for the survivors, as reported by Mr. Dunn, that the weather and sea cooperated. "We got a good break on the sea and the weather."

On February 19, 1942, it was reported in the paper that all crew and passengers had been rescued and that one passenger had died. The survivors took to four lifeboats. The lifeboats spotted by the planes with 47 survivors were picked up in the afternoon of February 15 by the US Coast Guard cutter Calypso and landed in Norfolk the following morning. The destroyer USS Jacob Jones picked up 16 survivors, including the master, on February 17th and USS Eagle rescued 21 people the same day including the one passenger that had already died. 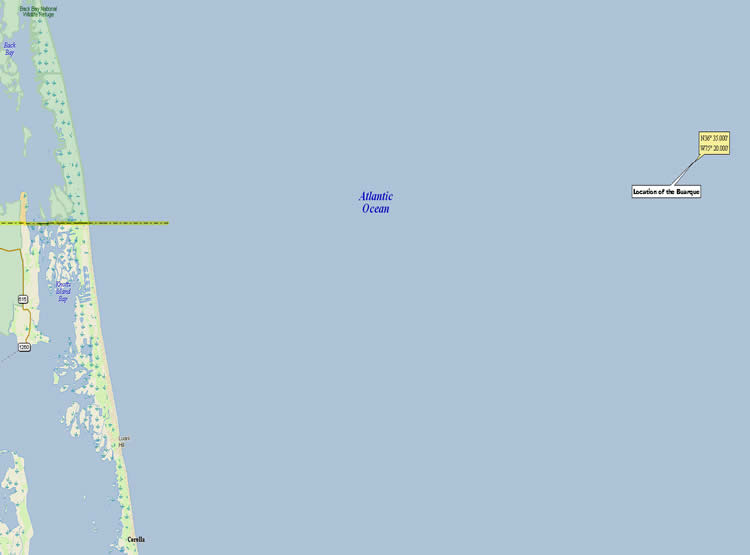