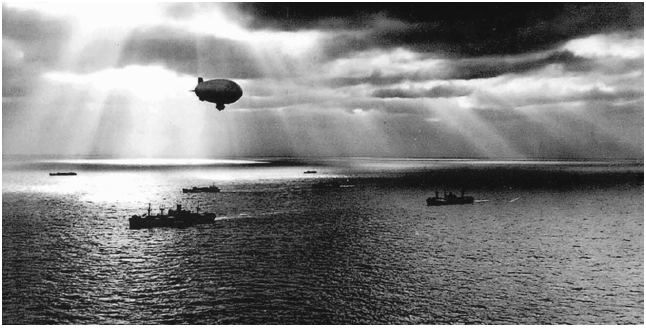 A U.S. Navy blimp flies over a convoy of ships to protect it from German U-boats. Photo courtesy of Stephen D. Chalker.

As 1942 moved on less and fewer German U-boats were able to strike along the East Coast of the United States. As is noted in Ships Lost in 1942, as the year went on by mid-1942, the attacks had all but came to an end. The United States began to increase patrols by the U.S. Navy and U.S. Coast Guard and planes from the U.S. Army Air Corps. Blimps from a station at Elizabeth City also added to the patrols. Even private yachts and sailboats with two-way radios were used to patrol the ocean. The military also set up top-secret listening and tracking facilities in places like Ocracoke to track if any U-boats were in the area.

As can be seen below, the number of sunken ships in 1943 dropped off dramatically.