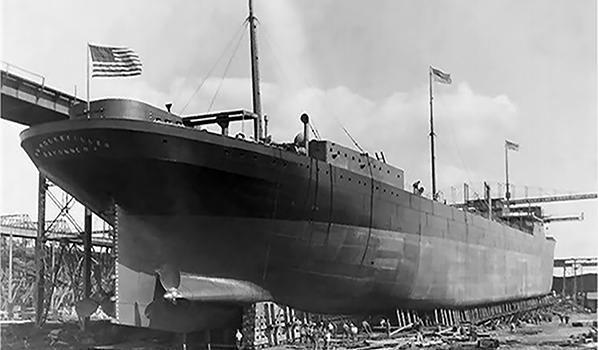 William Rockefeller under construction. Courtesy of The Mariners' Museum.

The Sinking of the William Rockefeller:

The William Rockefeller was built in 1921. It was the sistership of John D. Archibold. It was named after another ship that had been torpedoed in WW I. She could carry up to 146,745 barrels of oil and could pump out 7,000 barrels an hour when unloading. From the start of the war in Europe until the day she was sunk the William Rockefeller made 49 voyages (see chart below for details) to deliver oil. From September 3, 1939 to March 15, 1942, most of her trips began in Corpus Christi, Texas, and delivered to refineries in northern New Jersey. There was one exception when on October 11, 1939, when she picked up oil at Baton Rouge.

In March of 1942, William Rockefeller took on fuel oil in Curacao and was to deliver it to Cape Town, South Africa. She departed on March 30 and sailed alone for 29 days and arrived at Cape Town on April 28. There she unloaded the oil and then returned to Guiara on June 2. At Guaira, crude oil was loaded that was destined for Aruba. In Aruba, she was loaded with fuel oil. On June 19, 1942, at 7:00 AM she left bound for New York with 136,697 barrels of fuel oil. At the command were Captain William R. Stewart and Chief Engineer Edward A. Snyder.

The following is the report given by the captain:

"We proceeded according to routing instructions received from the British naval authorities at Aruba, steering various courses as prescribed. The vessel was all blacked out at night.
"On June 27 we arrived off Ocracoke Lighthouse at about 3:30 p.m. and were ordered to heave to. \Vithin a short time we were approached by a U. S. Coast Guard patrol boat which instructed us to proceed toward our ultimate destination. The com­manding officer of the patrol craft came aboard the Wm. Rockefeller and while he was laying out courses for us we received new orders. Accordingly, the patrol boat escorted us to a designated haven, where we anchored overnight.
"Early in the morning of June 28 we hove anchor and proceeded for several hours under the escort of the same Coast Guard vessel that had left us the night before. We were then met by another patrol boat which took over as escort. Several planes were observed overhead.
"At 12: 16 p.m., while I was in the chart room, a torpedo suddenly struck the tanker without warning on the port side amidships in way of the pumproom. I went into the wheelhouse and ordered the general alarm sounded and the engines stopped. The fuel oil valves were closed and the steam smothering lines opened.
"Our position was then 16 miles east northeast of Diamond Shoal Lighted Buoy, Latitude 35°1 l' North, Longitude 75°02' West.
"Third Mate Harry C. Sullivan was on the bridge, with Ordinary Seaman Jessie D. McDonald at the wheel. Able Seaman Vincent P. Shine was on lookout in the mainmast head; Able Seaman John J. Johnson was on lookout in the crow's nest, and Ordinary Sea­man Harry Utratil was on lookout atop the wheel­house. The United States Navy gunners were at their stations.
"I went to the lower bridge and walked to the after end of the midship boat deck, but could determine little as to the damage because of the dense smoke and fire. Practically the whole after end of the ship was shut off from view. Later, when we abandoned the Wm. Rockefeller, I could make out the upper part of a huge hole in her side, which appeared so similar to torpedo damage I had seen that I was sure a torpedo, rather than a mine, had hit the vessel."

On June 28, 1942, when leaving that morning after being anchored the night before at Ocracoke Inlet it was being escorted by two Coast Guard cutters and three patrol planes. At that same time, the German U-boat U-701 was patrolling the area while making minor repairs. As the tanker was near Hatteras, the U-701 reported hearing "heavy engine noise." Hearing this noise, the captain (Kapitänleutnant Horst Degen) ordered the periscope raised, and low and behold there was the William Rockefeller.

The U-701 fired two torpedoes at the tanker. One torpedo hit the vessel amidships on the port side. The result of this hit was a 20-foot hole in the side of the ship. The gaping hole sprayed the cargo's oil over the back half of the ship. The pump room and the #5 tank flooded right away and fire spread across the ship. According to the statement of Chief Engineer Synder:

"\Vhen the torpedo struck I was in the 5tarboard alleyway and tried to get to the fuel oil valves on deck on the port side; this I found impossible, owing to smoke, oil, and debris. I went to the engine room and called out. As- there was no response, I proceeded aft and up on the boat deck. Here I stopped the port engine by means of the deckhand control and also dosed the starboard engine. Later, with the assistance of First Assistant Engineer John V. F. Brown, I opened the deck steam smothering lines. I then re­turned to the engine room to make sure all hands were out, after which I went down the Jacob's ladder on the starboard side and climbed aboard the after starboard life raft."

The captain, Captain Stewart went on to report:

" Third Mate Sullivan was with me on the boat deck. At first, I concluded that there was no e1nergency requiring the abandonment of the ship and was planning to turn the Wm. Rockefeller landward and beach her if necessary. However, when I realized that the fire amidships prevented anyone from passing be­tween the forward and after parts of the vessel, I decided there was no alternative to abandoning the ship.
"About 12:28 p.m. all the boats were lowered; I took a final walk around the lower bridge to make sure that no one remained on board. I was the last to enter No. 2 boat. The vessel had not settled to any appreciable extent and I thought it would still be possible for me to return later when the fire had subsided. with a view to deciding whether the Wm. Rockefeller could be navigated and beached if neces­sary. However, about 20 minutes after a Coast Guard patrol boat had picked up the last man. the fire on the vessel increased considerably. extending over at least half of the ship and burning fiercely until we lost sight of her."

The ship did not settle lower in the water as it burned fiercely amidships. It remained on an even keel. The U.S. Coast Guard vessel USS CG-470 rescued the crew of 50 and took them back to Ocracoke Harbor. Twelve hours after it had been first hit, the William Rockefeller finally sank.

Again, from the captain's report:

"The patrol boat took us to the Ocracoke Coast Guard Station, where we arrived about 5 p.m. and I ascertained from the commanding officer that another Coast Guard vessel, out of Norfolk. was standing by the Wm. Rockefeller.
"Some of the men who were smeared with oil. which had got into their eyes, and others with minor cuts and bruises, were treated at the Coast Guard Station."

By 3:00 AM on June 29, Captain Stewart learned that the fire got out of control and the tanker sank at about 11:30 PM the night before. 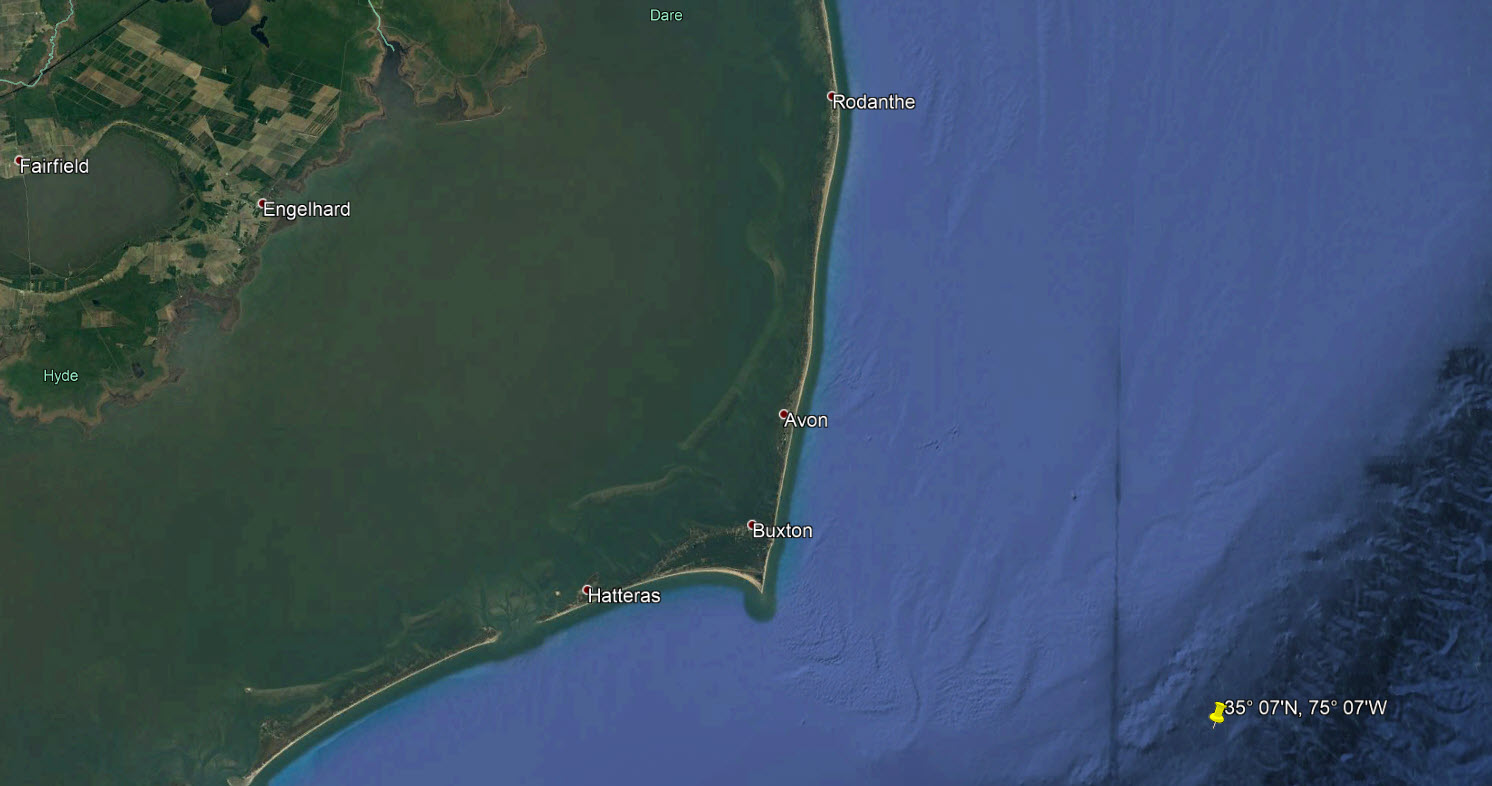 Photos of  the William Rockefeller: