The Sinking of the Caribsea

The Caribsea left Santiago, Cuba on March 5, 1942, with 3,600 tons of manganese ore to be delivered to Norfolk, Virginia. The ship was given no provisions to protect itself from attack even though twenty-nine ships had been torpedoed sunk over the past six weeks.

On March 11, 1942, at 7:58 AM, the unescorted and unarmed Caribsea captained by Nicholas Manolis was missed by one torpedo from U-158 about 14 miles east of the Cape Lookout Lighthouse. The torpedo missed, because the captain of the U-boat, Erwin Rostin, thought the ship (misidentified as Coast Guard vessel) lay dead in the water. However, Captain Manolis reduced the speed of the vessel to four or five knots, according to the order he has received to pass Cape Hatteras in daylight. A second torpedo was fired, which struck the starboard bow at the #2 hatch, causing the boilers to explode. The Caribsea sank by the head due to her cargo in less than three minutes. Because the attack was so swift and the sinking occurred so quickly, no radio distress signals were sent and the crew of eight officers and 20 men had no chance to launch the lifeboats. The few survivors climbed onto two rafts that floated free and they later observed U-158 passing within 100 yards.

At approximately 8:00 AM, a convoy of three tankers, escorted by a destroyer, passed with three miles of the stranded crewmen. However, they were not seen by the passing vessels. A half-hour later a seaplane flying south was seen, but then again they were not spotted. At 10:00 another seaplane flew over heading north and then east but once again no luck for the remaining crewmen. Finally, at approximately 12:30 PM the SS Norlindo was heading north for Baltimore. The crew on the lift raft made use of a small metal can and was it as a reflector. A lookout spotted the light flashing through their glasses and the ship turned towards the survivors. Two officers and five crewmen were picked up by the American steam merchant SS Norlindo. On March 12, they were transferred to a Coast Guard dispatch boat and taken to Little Creek Coast Guard Station. From here they were transferred to the Marine Hospital in Norfolk, Virginia. Three survivors were transported by ambulance due to injuries. The remaining crew members traveled by Navy station wagon.

On March 23, 1942, an anti-submarine patrol plane mistook the mask of the Caribsea for a periscope and dropped a depth charge on it. Finally, in 1944 the wreck was demolished to clear the area for other vessels traveling along the corridor. 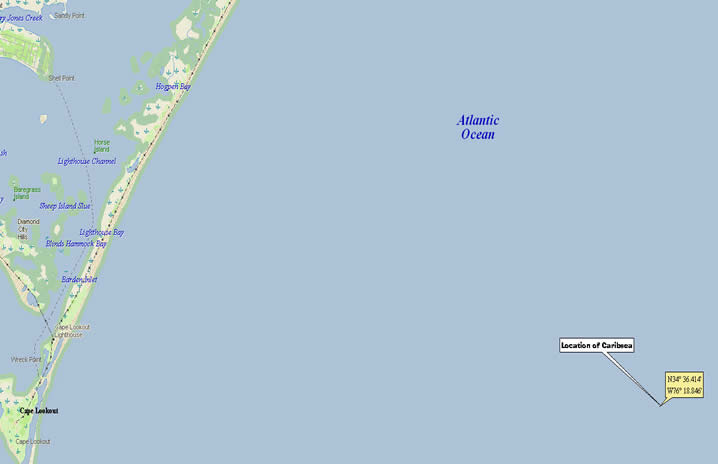 A listing of the lost crew: Total Crew Lost: 21, Survivors: 7