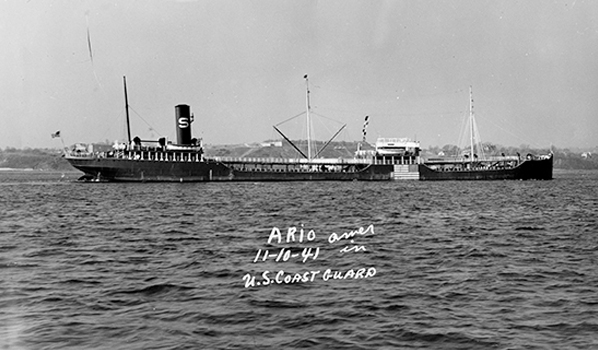 The Sinking of the Ario:

Over the years there has been a lot of speculation of where the Ario was located after it was sunk.  Some felt there was confusion over which ship was on the floor of the ocean. We'll talk more about that later. Now let's talk about what happened to the Ario on the day in 1942.

The Ario made frequent trips between New York and Corpus Cristi, Texas transporting fuel oil. On this trip, they left New York City headed to Corpus Cristi to bring back another load of fuel oil. The ship was commanded by Captain T.R. Hannevig with 36 crew members aboard. Because it was headed to Texas its cargo haul was empty.  The night of March 14, 1942, Second Officer Francis Doudreau stood watch atop the bridge as the Ario rounded Cape Lookout (see below). He had served on the Rochester only six weeks before making that same run when it was torpedoed and sunk off the Virginia coast. Being overly cautious, Doudreau reiterated the captain's orders that the blackout rules were strictly enforced. 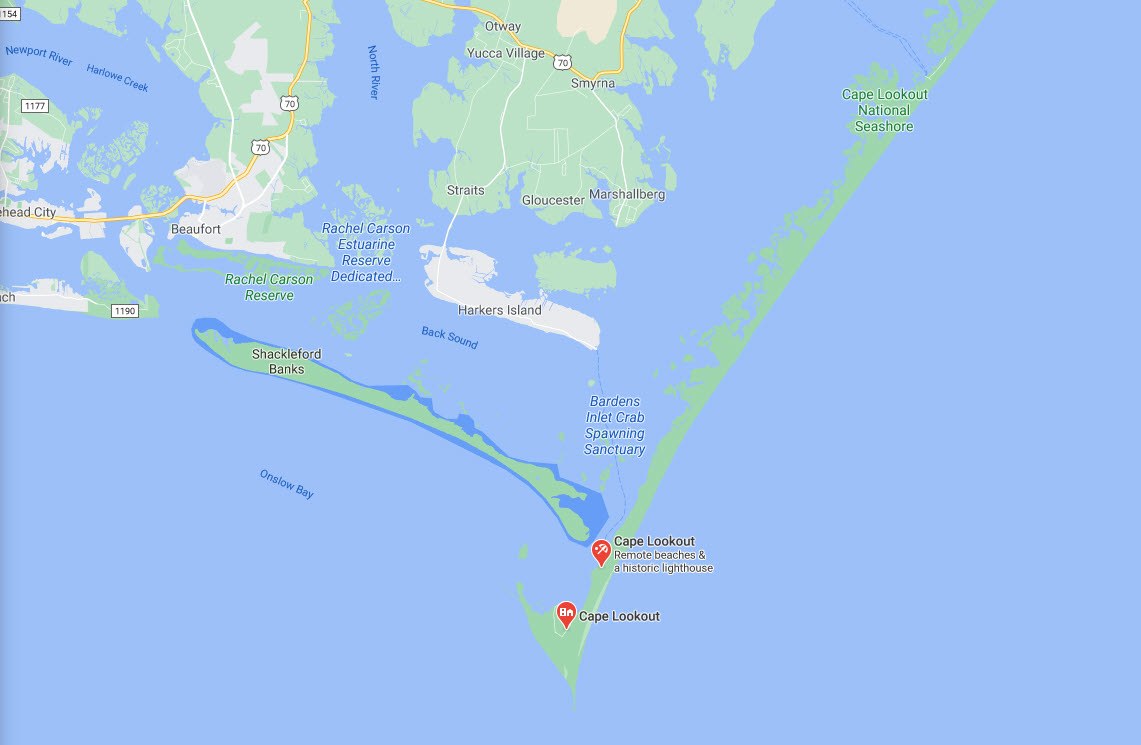 Being cautious after having passed the lighted buoy at Cape Lookout, the captain ordered the helmsman to steer 235° true and ordered the engine room to get to full speed. The Ario zigzagged its way at 11 knots. The captain reported that "The sea was calm and the night was dark but clear, visibility was excellent."

As they moved into the next day, on the morning of March 15, 1942, shortly after 1 A.M., the lookout on the forecastle head, sighted a small vessel 200 to 300 yards off the ship's port bow. This unidentified ship passed across the Ario's bow, port to starboard, at 15 knots. The captain ordered a right rudder for the ship and sounded general quarters. Five minutes later,  it was struck by a torpedo on its starboard side fired by the U-158 commanded by Kapitänleutnant Erwin Rostin. The engines were stopped immediately as the ship began to list heavily to the port side. the radio operator sent a distress call, giving the position of the ship at 10 miles east of Cape Lookout. Captain Hannevig gave the order to abandon the ship. The bad news was as he gave the order a second U-boat appeared on its port side and joined the U-158 in hitting the Ario.

At this time, below deck, several members of the crew were involved in a poker game. When the torpedo hit the men scrambled to the lifeboats leaving $25 on the table. However, before the boats were lowered shells hit the tanker on both the starboard and port side. The u-boat on the starboard side, approximately less than 1,000 feet away, hit the ship with gunfire. Both u-boats used tracer shells and parachute flares as 35 of the 36 crew members left the ship in two lifeboats.

Captain Hennevig estimated that the shelling lasted about 10 minutes and each u-boat fired about fifty rounds. One shell "shot away the falls of the No. 1 lifeboat. Another struck the No. 3 boat aft, setting it on fire and dropping it and its occupants into the water. Men in the No. 1 boat proceeded to pick up those who had jumped and those who had escaped the flames in the No. 3 boat. Two bodies of men who had died of shock were pulled from the water. Of the others from the shelled boat, many were injured."

As mentioned previously, 35 of the 36 men made it to the lifeboats. The assistant engineer remained aboard. At daybreak, he launched a rafter and at 7 A.M. he was picked up by the U.S. destroyer DuPont (DD-152). The DuPont went on to rescue the remaining crew and landed them in Charleston. Prior to their departure, a boarding party including the captain, first and second officers, chief engineer, and some of the seamen reboarded the Ario at 9:30 A.M. to secure instruments, codes, and secret papers. They also wanted to evaluate whether the ship was salvageable or not. They realized the ship was too badly damaged and was near sinking. As they left the Ario for the final time they could see the damage done by the shells. Several large holes were visible along both sides of the vessel (one by the No. 2 tank, one in the No. 6 tank), as well as small holes at the engine room on the port side, and the ship's smokestack was badly perforated.

The final death toll was eight and the insurance underwriters paid $94,900 for constructive loss of the hull. On April 28th of that year, the Navy Salvage Service of New York reported to the owners of the Ario that it was doubtful that the ship could be raised.

And the mystery of its whereabouts became somewhat controversial. At first, reports indicated that the Ario wreck was never found. The Ario and the Tamaulipas were identical ships. They were built 8 months apart by the same shipbuilder. They were sunk within three weeks of each other less than 18 miles apart. Some felt the wreck site of the Tamaulipas is really that of the Ario and the Tamaulipas actually sunk in deeper waters. At another point, a photograph reported to be the "Orio" shows two masks in the distance sticking out of the water (34°37'N, 79°19'W). It was later determined that the wreck was actually the Dixie Arrow. In 1944, the USCG Gentian located a wreck at 34°19'N, 76°27'W which they thought to be the Ario because it was located about ten miles from the position it was last seen afloat. On the day of its investigation, there were high winds and heavy seas so their sonar work and underwater photography were impossible.

From what Gary Gentlie reports in his book, Shipwrecks of North Carolina from Hatteras Inlet South, the position indicates the Gentian actually located the Bedfordshire. This book was originally published in 1992.

According to NOAA (https://monitor.noaa.gov/shipwrecks/ario.html), the remains of the Ario are located inshore in relatively shallow waters, approximately 60 feet deep. They report that due to its location, the site is very broken apart due to the post-war efforts to clear navigable areas by dynamiting and wire-dragging sunken vessel remains considered navigational hazards. They blame the confusion regarding its identification was due to the combination of initial reports at the height of the U-boat attacks, the number of ships lost at sea, and resources diverted to the salvage of the still floating Olean that had been attacked by the same u-boat (U-158) as the Ario. According to them, since 2008, with the assistance of local divers and avocational researchers, NOAA has determined that other shipwrecks were incorrectly identified. With their new research, they were able to correctly identify the ships. The ships Mirlo, Papoose, W.E. Hutton, and San Delfino  What was once identified as Mirlo is actually the San Delfino. The site identified as Papoose is actually the W.E. Hutton. What was identified as the San Delfino is the Papoose. Finally, the site identified as the W.E. Hutton is the Ario.

In an article from the Carteret County News-Time dated October 24, 2014, a researcher from a local nonprofit dive company announced his company had confirmed the identity of the Ario. Rob Smith of Atlantic, president of Surface Interval Diving Co., said that his company had identified the Ario, which many divers had previously believed to have been the W.E. Hutton. He said that the identifying factor was the third mask discovered by his crew on July 12, 2014. “This is important because out of three possible tankers, only S.S. Ario was fitted with three masts. W.E. Hutton and S.S. Papoose both only had two masts, as did the other tankers associated with this misidentification,” he said in the press statement. “The shipwreck, once called ‘hutton’ is, in fact, S.S. Ario. We also now know that the other associated wreck, lying offshore of S.S. Ario, is now confirmed to be W.E. Hutton.”

One final note, Kapitänleutnant Erwin Rostin, and the U-158 also sank the Caribsea and the John D. Gill. On its next patrol, the U-158 was sunk on June 30, 1942, when a PBM-3C Mariner flying boat on anti-submarine patrol from Bermuda was redirected to the area and picked up radar contact. They dropped two depth charges that detonated directly underneath the stern and caused the U-158 to sink immediately. All 54 U-boat crew and two prisoners from Everalda were lost. 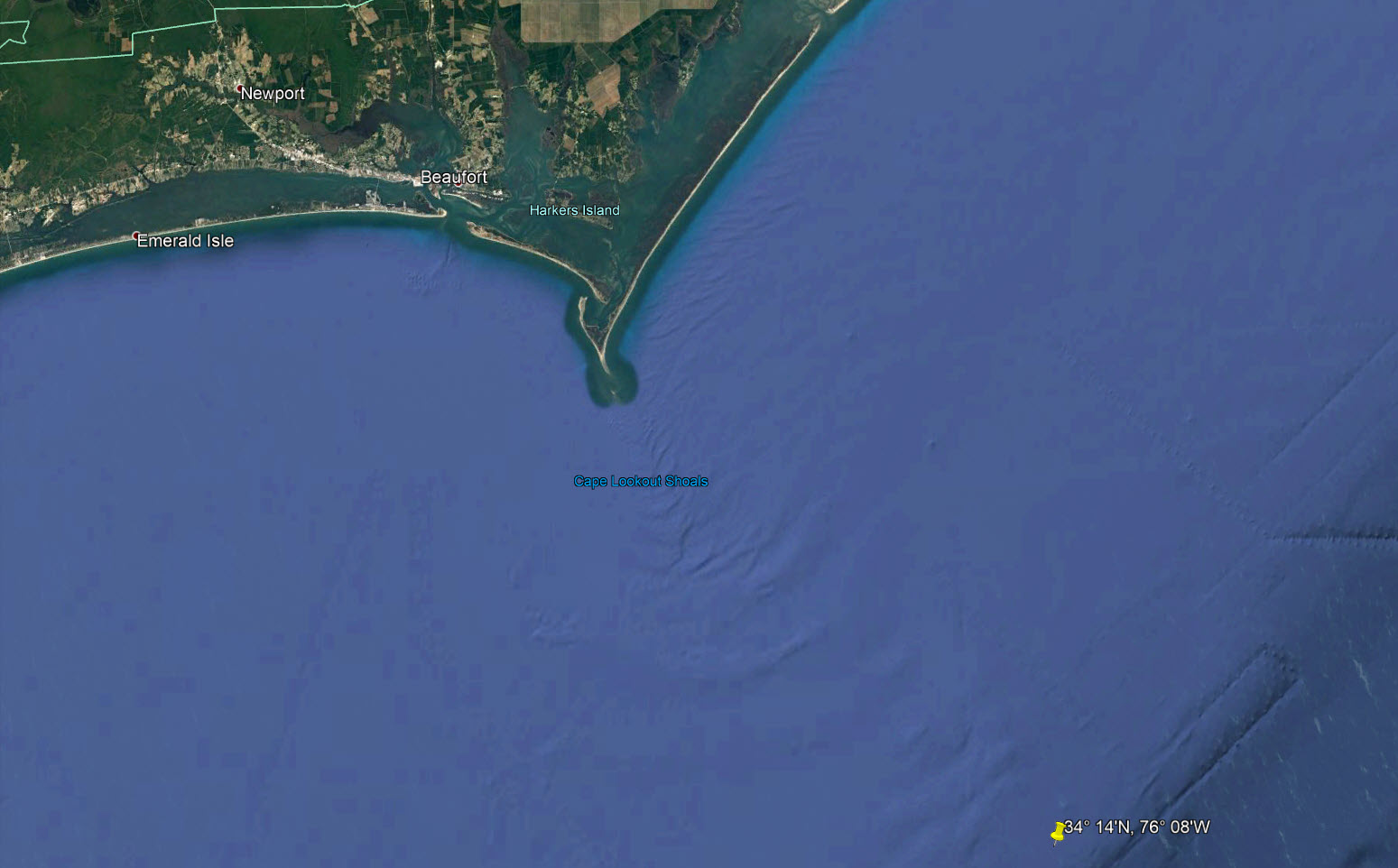 Rob Smith, president of Surface Interval Diving Company of Otway, left, and Booby Willis, vice president, sit with some of the artifacts from the Ario. (Cheryl Burke photo)