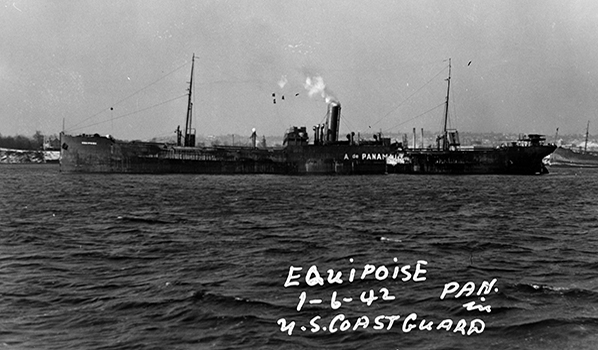 The Sinking of Equipoise:

The ship originally started off as the freighter, Chanda owned and operated by the British Steam Navigation Company from 1906 to 1925. In 1925 it was sold to the Italian Navigation Company and renamed Pietro Campanella. On August 23, 1941, it was seized by the United States on the executive order and turned over to the War Shipping Administration and renamed Equipoise. At this time it was registered in Panama. On October 3, 1942, it was given to International Freighting Co. under GAA (General Agency Agreement) agreement.

On January 17, 1942, the ship departed New York heading for Rio de Janeiro with a load of unspecified cargo. It stopped in Norfolk, Virginia on January 19, 1942, On January 23, it departed Norfolk headed to its destination. Equipoise arrived in Rio de Janerio on February 25 and departed on March 5 headed to Baltimore, Maryland. Onboard was 8,000 tons of manganese ore. Manganese ore was predominately used in the making of steel.  So to say the least in wartime, it was precious cargo.

The Naval Routing Office at Rio gave Equipoise a specific track to maintain on its voyage to Baltimore. So traveling at a speed of eight knots it made it way up the coast. The Captain, John Anderson followed the protocol of running blacked out at night. Some of the men had been chosen to operate the ship's 4-inch deck gun, two machine guns on the poop deck, and two machine guns on the bridge.

Unfortunately, the preparations made in the case of an attack were all for naught. At 2:38 A.M. on March 27, 1942, the ship was hit by one torpedo from German U-boat U-160. This was the first ship to be attacked by this German U-boat.  The torpedo struck the starboard side of the ship between the #1 and #2 hatches, destroying the bottom of the ship. The ship sank within two minutes. A summary report stated: "It is believed that an entire bottom portion of the ship was blown out." In addition, the weight of its cargo of ore only added to its quick sinking.

In those two minutes, there was much confusion. Because of the various nationalities (Finns, Danes, Swedes, Norwegians, Poles, Latvians, Estonians, Lithuanians, Hungarians, Portuguese, Brazilians, and Americans), communication was a huge problem. Kjeld Kristiansen, a fireman, stated: "Too many nationalities; they couldn't understand each other."

Most of the men were below deck and were trapped by the quick-rising water and drowned.  Two lifeboats and two rafts were launched. However, one of the lifeboats overturned as it reached the water. The other lifeboat launched without any men in it.  At that time only fifteen men were left alive and some were injured. The other major problem they had was no one knew they were out there or the ship had sunk. Due to the orders of maintaining radio silence, there was no issuing progress reports nor transmitting an SOS.

The first night one man died of his injuries. The following morning, Captain Anderson died and his body was washed overboard due to high seas. The remaining survivors had to endure the bitter cold. They continually looked and listened for any patrol planes or other ships to appear on the horizon. And yet, they saw or heard nothing. Day turned into night and the men continued their suffering with food or water. Those in the lifeboat were cramped together in a very uncomfortable situation. Those on the raft had to endure constant waves washing over them.

On that second day, thirteen men were still alive and desperately hoping to be rescued. Late that afternoon (4:30 PM) the U.S. destroyer Greer (DD-145) spotted the lifeboat containing eight of the survivors. Approximately between (5:00 and 6:00 PM), the Greer found the two rafts carrying the other five men and the body of the carpenter.  They were all taken to the Norfolk Naval Base in Norfolk Virginia at 2:00 AM on the 29th of March. Nine of the thirteen men were hospitalized.

Photos of the Equipoise: