The Sinking of the Victoria S :

A schooner's grounding results in the first automobile accident on Ocracoke Island? Well, the four-masted schooner, Victoria S. had left Georgetown, S.C. headed to New York with a cargo of lumber.

According to the Village Craftsmen, a Coast Guard surfman, Homer was with his son walking the beach on August 22, 1925, when they noticed Victoria S off the coast of Ocracoke. Homer's assignment was to walk along the surf and keep an eye on the ships traveling along the coast. He would spot ships heading north and south. Southern journies would see ships hugging the coast to avoid strong northward currents of the Gulf Stream. Ships heading north had to deal with the currents, strong winds, and dangerous shoals. To make matters worst, storms would crop up with little warning rendering ships the dangers of the outer breakers of Ocracoke Island.

That is when Homer noticed a schooner sailing south and then tack back towards the north. Shortly thereafter, the ship tacked back toward the south and then back northward again. Homer believed that the captain was purposely going to run the ship aground once it got dark in the hopes of receiving insurance money due to his grounding.

In the early hours of August 23, 1925, a notice went out that a ship was ashore. The Coast Guard went to the rescue. The Victoria S had run aground in the breakers directly across the Plains from Ocracoke village. The Coast Guard team was able to pull the seven-man crew safely to shore. It wasn't too much longer than the ship broke apart in the surf and the lumber began to float away in the ocean.

Over the next few days lumber washed ashore along several miles of beach. The owners of the ship were contacted and an agent was sent to Ocracoke to manage the salvage operations. After assessing the situation the agent contacted Captain Bill Gaskill, owner of the Pamlico Inn on the sound side of the island. Captain Gaskill had a flatbed truck. The agent also contacted Albert Styron, who owned a general store near the lighthouse. He too had a truck.   The agent hired both men to drive to the beach and begin to recover as much lumber as they could. In the meantime, a steamer was brought down to Pamlico Sound to load the recovered lumber.

So the recovery mission began as both men drove to and from the beach with the lumber they recovered. The one problem they faced was that the road going through Ocracoke village was a one-lane, soft sand road. In front of Stacy and Elizabeth Howard's house was at a sharp bend in the road and loose sand was deep. So in their Model T trucks in order to make it around the bend, they needed to gain enough speed and maintain it around the curve. At the same time, they needed to avoid the deeper sand at the edges. Captain Gaskill with a full load of lumber was headed west while Albert Tryron was heading east after having just unloaded lumber onto the steamer.

So we now had Captain Gaskill heading to the steamer and Albert Tryon heading to the beach when they entered the bend from opposite ends at the same time.  Next thing ...a head-on collision with the only two vehicles on the whole island! A first to ever occur on the island.

Here is the location of the sinking: Off the plains of Ocracoke Village 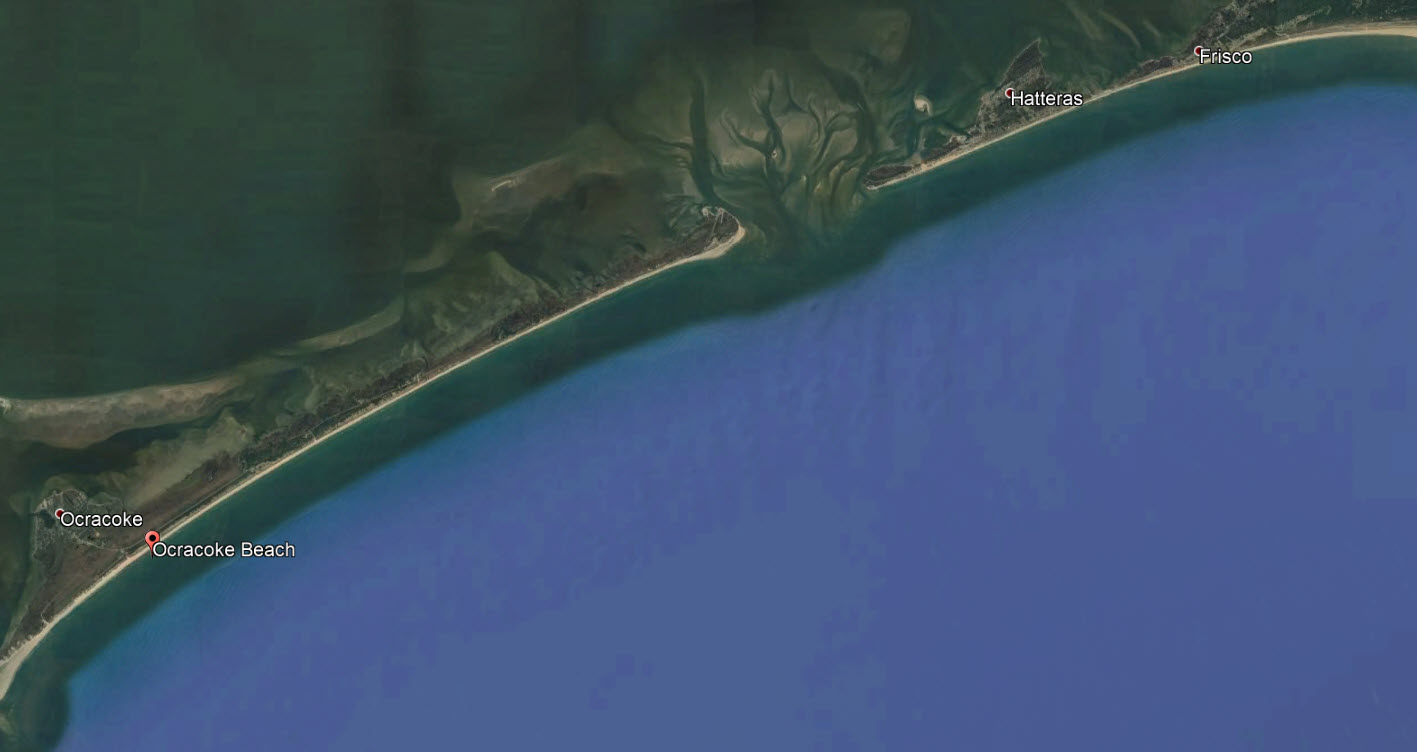