The Sinking of the F.W. Abrams:

In 1920, the F.W. Abrams started off with the name Nora. It was named after the daughter of J.P. Grace, owner of the Grace Company. The company sold the Nora in 1932 to Standard Oil Company and was renamed the F.W. Abrams. She was the sistership of the R.G. Stewart and the E.G. Seubert. The ship's cargo capacity was 101,021 barrels of oil.  Her powerful pumps were able to unload a full cargo of oil within thirty-four hours. Between the outbreak of the war in Europe and her sinking, the F.W. Abrams made forty voyages from the Gulf of Mexico and Caribbean loading ports to numerous refineries. Most of the shipments were mostly crude oil with occasional loadings of fuel oil, diesel oil, and distillates.

On June 2, 1942, after loading 90,294 barrels of fuel oil in Aruba, the F.W. Abrams headed to New York with Captain Anthony J. Coumelis in charge. According to Captain Coumelis: "We proceeded according to routing instructions received from the British naval authorities at Aruba. The vessel was all blacked out at night." Near noon on June 10, the F.W. Abrams passed Cape Lookout.  Later in the afternoon they reached Ocracoke and was directed to anchor for the night.

The captain went on to explain:

"On June 10, about 4 p.m., we arrived at position Latitude 35°01' North, Longitude 75°59' West, to anchor for the night. A Coast Guard patrol boat met us and I requested Second Mate Charles B. Miller to signal for instructions .. By semaphore, the patrol vessel ordered: 'Follow us to anchorage.' At the designated anchorage we were informed by the Coast Guard boat that we would get underway the next morning at 4 o'clock. "In compliance with these orders, we were all ready when the patrol vessel appeared at the time assigned. I was then on the bridge, with Chief Mate Myron W. Chamberlin and Junior Third Mate James I. Watler; Able Seaman John E. Hanley was at the wheel and Able Seaman Helmar Ohman was on lookout at the foc'sle head; Second Mate Miller was also on the bridge, assisting. The night was dark, the sky overcast, and visibility poor. The sea was moderate and the wind south-easterly. It was just beginning to rain. At the patrol boat's signal, we followed her at about three ship's lengths astern, proceeding between the buoys in a west southwest direction. About 6 a.m., the patrol vessel left and we con­tinued on our way without escort.

"At 6:40 a.m., a terrific explosion occurred on the starboard bow, causing the ship to sheer about 30 degrees to port. · I ordered the general alarm sounded and the control valves to the smothering system opened; all hands went to their boat stations. I then sent the first mate to investigate our damage and instructed Radio Operator Eldon E. McCarthy to send out a message, which was acknowledged immedi­ately. I also telephoned to First Assistant Engineer Owen L. Earnshaw, on watch in the engine room, tell­ing him to put the engine full astern, and requested Second Mate Miller to take a sounding. The ship soon stopped and settled about ten feet by the bow.

"As it appeared that she was not in a sinking con­dition, I decided to proceed to the nearest port and ordered the engine 'Full ahead'; but owing to difficul­ties with the boilers, the engine could only be put 'Slow ahead'. The F. W. Abrams was then heading about 105°. I directed Junior Third Mate Watler to put the wheel hard right, but the ship would not answer to the helm and was apparently unmanage­able. The engine was then stopped and I sent another radio message requesting assistance. This message was acknowledged, with instructions to wait.

"At 7: 17 a.m. another violent explosion occurred on the starboard side in the vicinity of No. 5 main tank, which caused the tanker to settle further by the bow; her decks were now awash as far as No. 6 tank. Second Mate Miller reported that the side plating between No. 5 and No. 6 tanks was buckled in on the starboard side and buckled out on the port side." I sent for the engine crew to come up to their boat stations and prepared to abandon ship. However, only No. 2 lifeboat was launched at this time in or"der to get off Able Seaman Hanley, who had been injured as a result of the first explosion and was unable to walk by himself. Able Seaman Henry F.McGowan and Oiler Miguel Ortega also got into No. 2 boat and I ordered them to stand by off our port beam to pick up any crew member who might jump overboard in the emergency. I decided that the rest of the men could wait aboard for assistance.

"Shortly thereafter, Mr. McGowan and Mr. Ortega"Shortly thereafter, Mr. McGowan and Mr. Ortegashouted 'Submarine on the port quarter, but as there was nothing I could do, I stood on the starboard wing of the bridge to avoid eventual gunfire from the U-boat."At 7:39 a.m., a third explosion, more violent than the preceding two, occurred somewhere between the bow and the bridge, presumably on the port side, causing the F. W. Abrams to list to starboard. She was now sinking rapidly by the bow and I gave the order to abandon ship in the remaining lifeboats.

"The entire crew landed safely at 12:40 p.m., approximately five miles from the Ocracoke Naval Station. We were transported by the Coast Guard to Morehead City and given assistance by Mr. John E.Lashley, a local Esso service station dealer."

So according to the men on the F.W. Abrams, the ship had been attacked by a German U-boat. This recollection was recorded in the book, Ships of the Esso Fleet in World World II, published in 1946. They were under the impression that they had been pursued all of this time by a U-boat that continually was firing torpedoes into the tanker. But in reality, they had lost sight of the escort vessel and wandered off course. The weather conditions at the time were not very good. There were heavy rains at that time. In going off course they had actually sailed into the Hatteras minefield. When their escort ship, CGC 484 turned around to respond to the F.W. Abrams SOS, the tanker mistook the Coat Guard Cutter to be a German U-boat. The captain's reaction at that time was to steer the ship towards the Diamond Shoals to ground the ship and prevent it from sinking. Unfortunately, with this maneuver the F.W. Abrams heading into the most heavily mind part of the Hatteras minefield. In the process, it set off two more mines.

The Captain and Chief Engineer Officer returned three days later on June 14 to check the status of the tanker and determined whether it could be salvaged or not. They returned to the ship with Navy authorities and saw she was only partly visible. During those three days, heavy seas had battered her until the tanker was completely submerged. At that point, they knew the tanker was lost for good.

What started out as one of the many journeys in the life of the F.W. Abrams ended with it being target practice for training planes. With both masts visible above the surface of the water, it made for a handy target for planes operating out of the Marine Corps Air Station at Chery Point. "On several occasions reports of periscope sightings were traced to the mast of this wreck, and on one occasion depth charges were dropped on it by a patrol plane." Finally, after the masts had been blown off, the Navy Salvage Service demolished the wreak at a clearance in excess of 40 feet. And so ended the life of the F.W. Abrams. Where other ships before it in that fatal year of 1942 had been sunk by German U-boats, the F.W. Abrams suffered a fate by a minefield that had been set up to protect vessels not sink them. 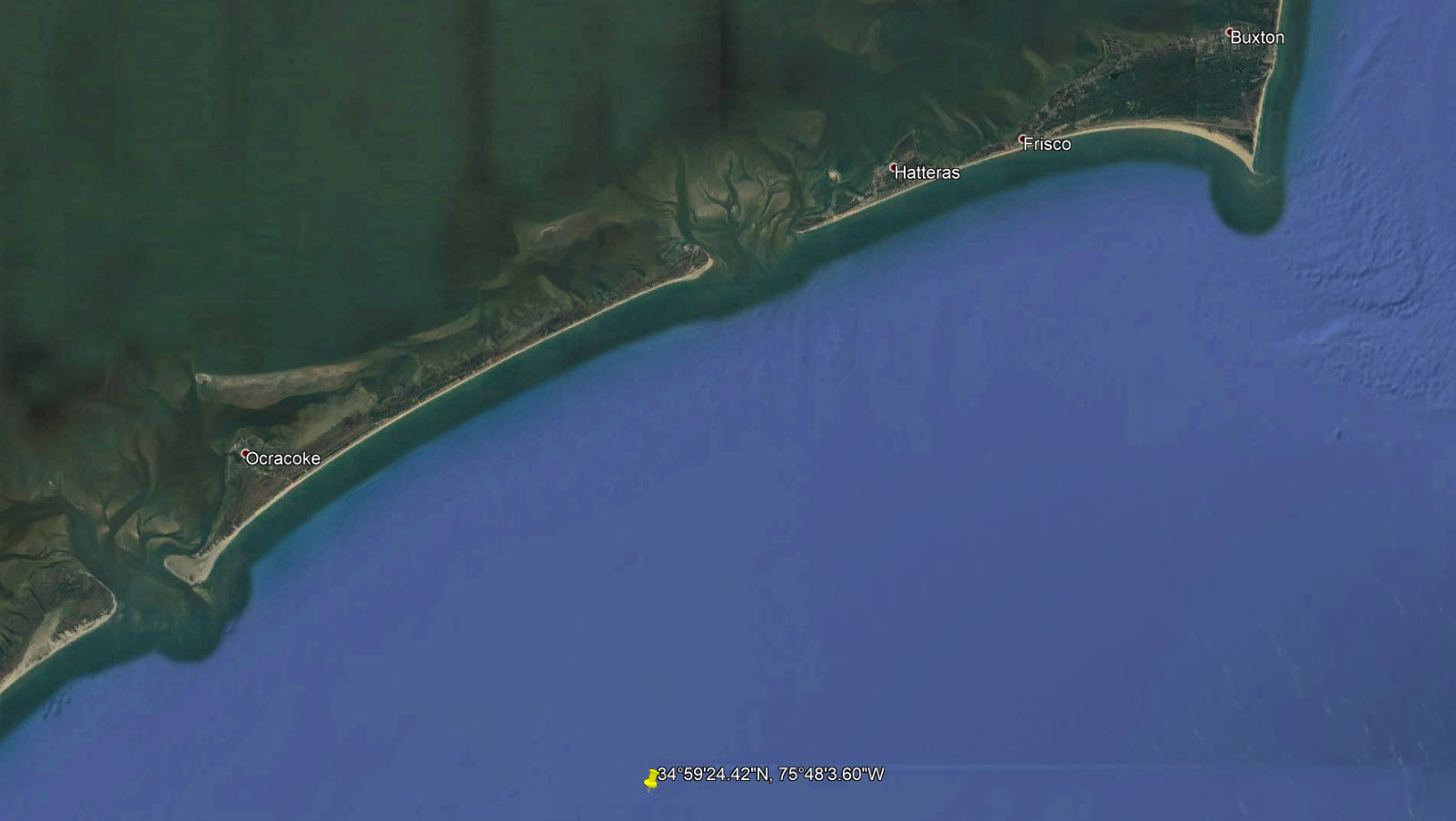 Photos of  the F.W. Abrams: