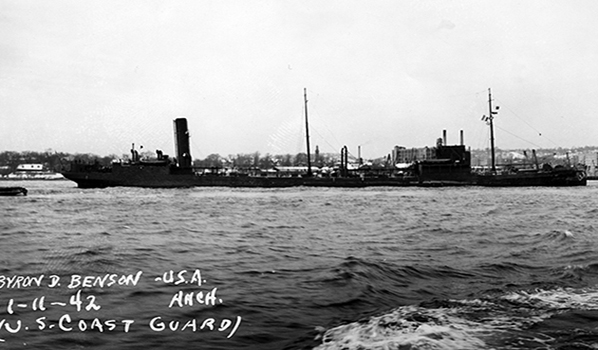 The Sinking of  Bryon D. Benson:

The Bryon D. Benson was a tanker that spent its time transporting petroleum from Texas to New Jersey and other ports along the East Coast. 1942 did not start off very well for the tanker. On January 10, it rammed into and sank the freighter Continent off the New York coast. The captain of the Bryon D. Benson, John MacMillian, wasn't found to be to blame for the sinking. The Bureau of Marine Inspection and Navigation in their investigation found "the collision was due to the failure of the Continent to keep out of the way of the Byron D. Benson which was the privileged vessel under the circumstances."

On March 27, 1942, the Bryon D. Benson departed from Port Arthur, Texas with 100,000 barrels of crude oil on its way to a refinery in Bayonne, New Jersey. The ship zigzagged its way up the coast to keep the U-boats from targeting their ship. U-boats found it much more difficult to hit a ship that didn't keep a steady course.

On April 4, the tanker passed less than 10 miles northeast of Oregon Inlet. The captain, John MacMillian, saw an escort ship blinking at him. It was the USS Hamilton (DD-141), At the time it was no longer alone. It was accompanied by two escorts and another tanker, the Gulf of Mexico. According to the official Navy report, "At first the officers aboard the tanker were unable to figure out the message which the sub-chaser blinked at them. The captain hurried back to the chart room and returned with the codebook which he kept carefully filed away in the wheelhouse. One mate said the code looked like 'AA', someone else was sure it 'L', and another piped in that he was just as certain that the code letter was 'O'. The captain looked at the codebook and, unable to fn an answer to his pressing problem slammed the book down disgustedly with a slight outburst of ocean-going profanity. Apparently noticing the confusion aboard the tanker, the sub-chaser ran up some letters, and then noting that the tanker still did not understand the hoist, the escort came close aboard, and, by the use of a megaphone, the Ciommaninding Officed called out, 'You and the other tanker will receive escort throughout the night. Do you follow me? Follow behind me!' With that, the sub-chaser and another patrol craft with it disappeared astern."

The HMS Norwich City, an armed British trawler, was thas the second escort ship. They gave similar instructions to the Gulf of Mexico. The Gulf of Mexico had just had a run-in with a U-boat in March. This encounter was about one hundred miles south of where they were now located. With the orders to both ships, they began to sail parallel to one another with one patrol boat in the front and another behind. The convoy continued their travels north through the night at eight knots.

There they were with a lookout on the bow and two on the bridge, another tanker by its side, two escort ships, and a plane circling overhead. What could go wrong? Plenty. Krvettenkapitän Erich Topp manuvered his U-boat (U-552) into position to attack. At 9:45 PM, he launched a torpedo in the starboard side amidships between No. 7 and No. 8 tanks. According to reports, "The explosion was devastating and everything seemed to catch afire on the starboard side of the ship as soon as the torpedo hit. Burning oil spouted out of the gaping hole...Members of the crew ran out from their compartments to find the forward part of the ship already on fire which was moving aft through the passageway and the scuppers on both sides."

Locked in a starboard turn by the blast, the ship couldn't be stopped and continued to circle spreading flaming fuel over the sea. Lifeboats #1 and #3 were destroyed in the blast. The only remaining lifeboats were #2 and #4, as well as one raft. Two crewmen in life jackets jumped overboard. One was rescued by the  USCG cutter Dionne and the other by a British armed tanker, HMS Norwich City. Twenty-six crewmen made it to Lifeboat #4 and were rescued by the USS Hamilton. There was another crewman, John Austrauski, who attempted to climb aboard the lifeboat but was told it was already overcrowded. He was sent to get on to the forward boat (Lifeboat #2). However, by the time he reached where the boat was supposed to be it was already gone. Captain MacMillian, the radio operator, and eight other crewmen made it the Lifeboat #2. Unfortunately, their lifeboat began drifting into the burning fuel.

Meanwhile, Austrauski spent nearly an hour alone on the burning tanker. Overcome by the smoke, he was still able to discover the raft. He took a fire ax and chopped the ropes holding the raft in place. Once the life raft was dislodged, he threw it over the side and jumped in after it. More bad news awaiting him. The raft was drifting towards the burning flames. The flames eventually engulfed the raft and it was destroyed. Prior to this, Austrauski jumped off and began to swim away from the raft. Still, the burning oil kept coming his way. With fire all around him, the heat from the flames was searing his lungs and the smoke made matters worst. As the flames approached his face, he ducked underwater and swam until he found an area of the water that wasn't filled with oil or on fire. He continued this pattern of going underwater, reappearing above the surface, and swimming away from the ship. According to what he reported he, "claims to have heard a drone that seemed to him to sound like an airplane engine, but which might have been that of a submarine...After that, he thought he saw some bright illuminating lights...that it might be an airplane dropping flares. They were bright bluish-white lights and traveled down slowly into the water. He didn't know where they came from."

What might have seemed like a delusional fantasy by a man who had endured a tremendous amount of stress and near-death experience might have some touch of reality? At that time the fishing trawler Issac Fass was setting their nets about three miles away. They too witnessed the same thing, "bright flames licking through billowing, thick smoke," and "red flames rise from close to the water on each side of the fire." Their ship was being shelled.

"Eight or ten shots were heard. Both the captain and the engineer declared that each shot jarred the Issa Fass and that the vibration was so great that a wedge between the exhaust stack and a hole through the roof of the pilothouse jarred loose and fell to the deck." The fishing vessel immediately started to haul in their nets in the dark. There dare not put on their deck lights in fear their lives would be imperiled. They went on to report a similar experience to that of Austrauski. "While the nets were being hauled in, the men noticed two bright red running lights coming toward them from the direction of the burning vessel. These lights appeared to be very steady and therefore could not have been on a lifeboat or fishing trawler. The smoke was blowing from the burning tanker toward the trawler so that the red lights were often obscured." Once the nets were secured, they took off.

With all of this commotion, the Gulf of Mexico had made its way further north. The Hamilton and the Norwich City searched the dark and smoke-covered sea for any survivors. While searching they didn't come across any u-boats in the area.  The men in Lifeboat #4 were picked up about two hours after abandoning the tanker by the Hamilton. Austrauski was rescued by Norwich City. The survivors were taken to the Norfolk Naval Operating Base. Two of the men were hospitalized for burns.

It just so happened that two of those rescued were not seamen. Monor Mabry was a nineteen-year-old plebe at the U.S. Military Academy. He joined the crew to regain his health after a serious eye infection had debilitated him. Merlin Johnson was a free-lance writer who signed on to see if he could get some type of story material. It seems as if he got his wish!

By dawn, the ship was still afloat and leaking oil into the ocean. Thick smoke billowed in the air and could be seen from a distance. The Byron D. Benson remained afloat until April 7, 1942, By the time she sunk (3 days later) there was nothing left except a burned-out hulk.

The aerial photo of the ship, with black smoke pouring from her deck, appeared in newspapers throughout the world. This publicity seemed to be a motivating factor in the United States stepping up its efforts to initiate anti-submarine warfare. 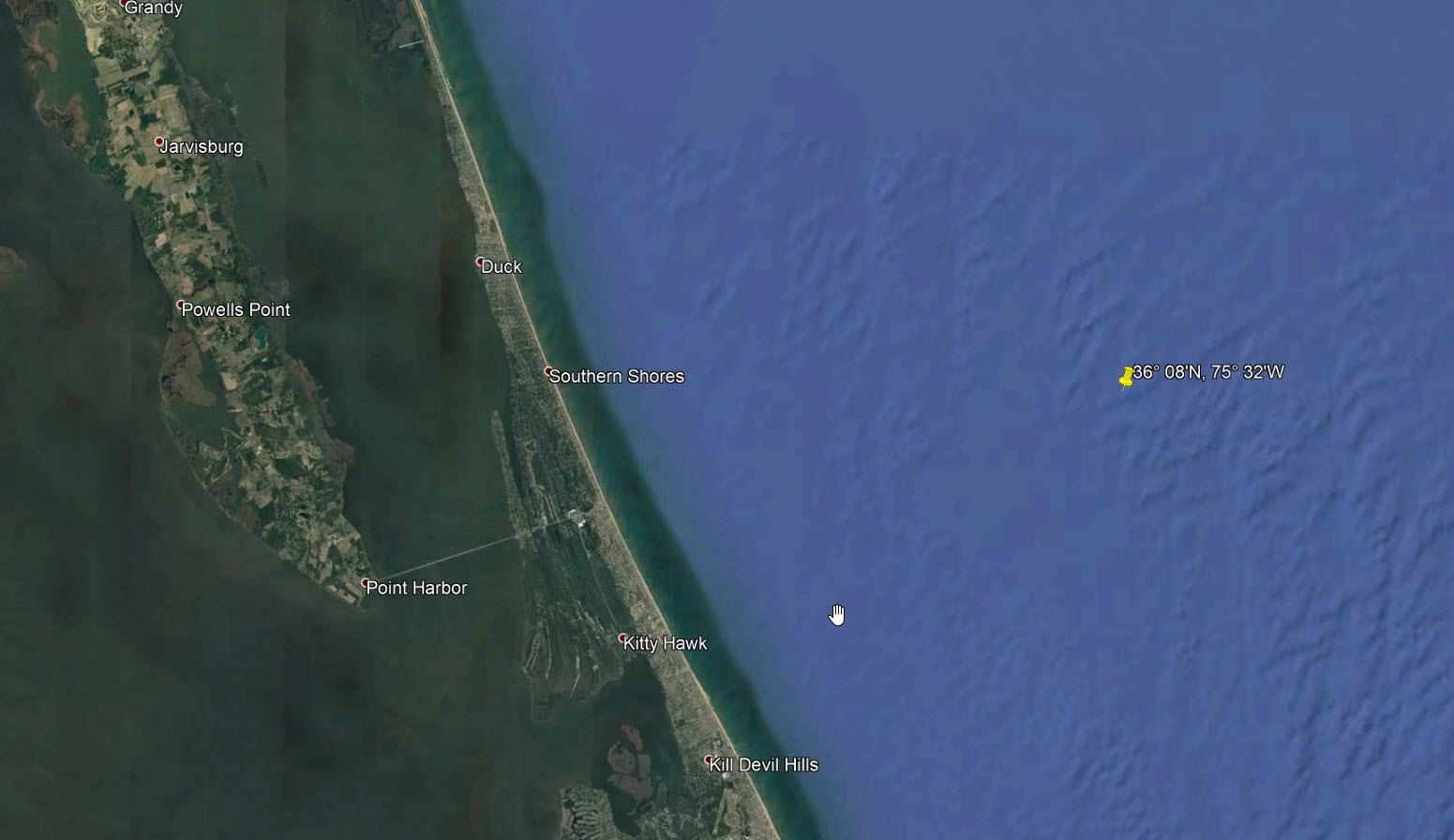 *Rescued by HMS Norwich City after the sinking.