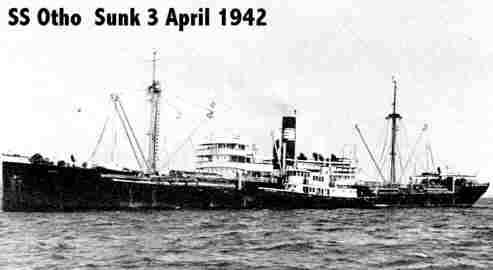 The Sinking of  Otho:

In investigating the sinking of Otho, it was difficult finding detailed information. Information from uboat.net revealed the following information:

The Otho was departing from Takoradi on the Gold Coast heading to Philadelphia. Onboard was 4400 tons of manganese ore, 1300 tons of palm oil, and 750 tons of tin. At 1149 AM on April 3, 1942, the unescorted ship captained by John Makkinje was hit by one torpedo from German U-boat, U-754. At the time their location was approximately 200 miles east of Cape Henry, Virginia. The torpedo hit the starboard side amidships just below the stack at the bulkhead. The hit was between the #3 tank and the engine room.

The explosion was so damaging that it only took 12 minutes for the boat to sink. Most of the ten officers, twenty-six crewmen, ten armed guards, and seven passengers abandoned the ship within five minutes in three boats and a raft. Three officers, nine crewmen, one armed guard, three passengers were rescued by the American patrol yacht USS Zircon (PY 16) and taken to Cape May, New Jersey on April 8th.

On April 25th, one crewman and five armed guards were rescued in their raft by the Norwegian motor tanker Gallia about 150 miles west of Bermuda and dropped off in Halifax, Virginia. The survivors were so exhausted that two men from the tanker jumped overboard to help them. One of the guards died an hour after being rescued.

The remaining crew and passengers who escaped the torpedoed vessel were never found. The total lost lives were: the captain, six officers, 16 crewmen, five armed guards, and four passengers.

*Survived the sinking but died shortly after being rescued by the Gallia on April 25, 1942