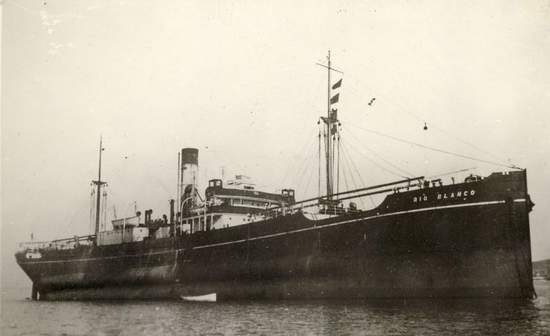 The Sinking of  Rio Blanco:

In investigating the sinking of Rio Blanco, it was difficult finding detailed information. Information from uboat.net revealed the following information:

The Rio Blanco was carrying 6440 tons of iron ore as it made its way from St. Thomas, Virgin Islands where it departed on March 16, 1942, and headed for Hampton Roads in the UK. At 4:22 PM on April 1, 1942, the ship was hit by a torpedo at amidships from the German U-boat, U-160.  Nine crew members were lost in the sinking and nine other crew members and one gunner died of exposure in the lifeboats. The Captain, Aiden Blackett, seven crewmen, and one gunner were rescued by the HMS Hertfordshire (FY 176) on April 15, 1942, and taken to Norfolk, Virginia. Eleven crew members and one gunner were rescued by HMCS Niagara (I 57) on April 14, 1942, and taken to Halifax, Nova Scotia on April 16, 1942.

* Died of exposure in a lifeboat after the sinking of Rio Blanco by German U-boat U-160.