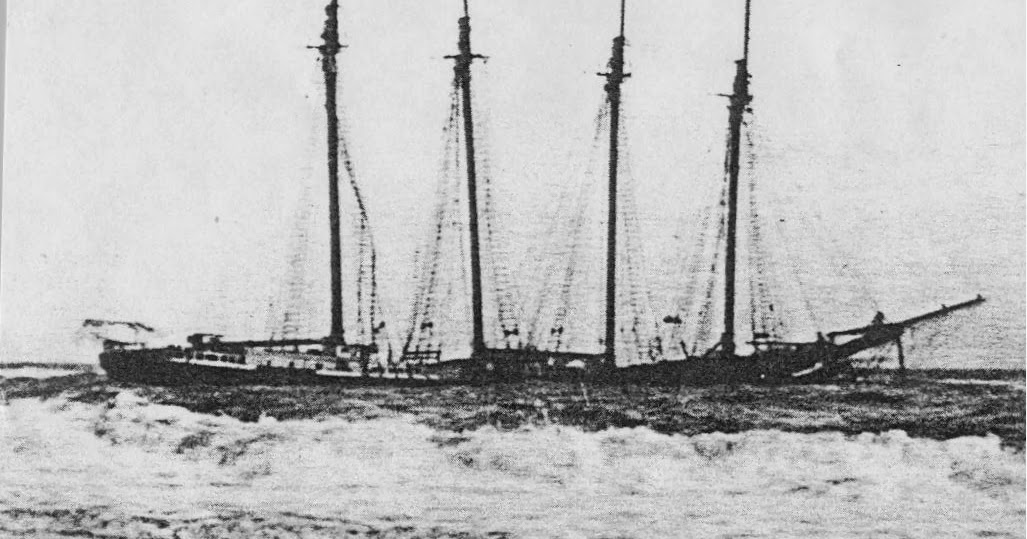 The Sinking of the Anna R. Heidritter

"Built in Bath, Maine as the COHASSET, she burned to the waterline January 22, 1907, while in Baltimore Harbor.  Rebuilt in Maryland as the HEIDRITTER she was launched in 1910.  She survived a U-boat attack in WWI & carried bullets in her masts from the encounter. "(taken from http://www.villagecraftsmen.com/goodwin1.htm#heidritter)

Some interesting events about the schooner were found while doing some research. A November 15, 1928 article appearing in the New York Times, indicates that the schooner had sent out an SOS on Tuesday night. However, Edward L. Swan of 26 De Koven Court, Brooklyn, the owner, reported it was in no danger. A navy communications from the navy station at Norfolk, VA forwarding a message from the steamship K.R. Kingsbury reported: "Passed four-masted schooner Anna R. Heidritter at 5:45 PM. Schooner flying signals of distress. Boats gone, also provisions. Requested one boat and provisions from revenue cutter. Position. latitude 31:58 north, longitude 75:08 west. Holding under easy canvas." The Kingsbury said that the schooner resumed course after relaying the message. This position would have put the schooner about thirty miles off Fernandina, FL, indicating she had blown off course during a storm.

On February 12, 1936, the New York Times reported the schooner, which left New York thirty-two days prior for Charleston, S.C. with 1,200 tons of coal was reported in tow on the evening of February 11 on her way to St. John's Light, FA after having been battered by storms. At the time of her rescue she was 300 miles southeast of Charleston and about 300 miles off course. The owner, Mr. Swan reported that the ship had most likely been blown by a northeast wind across the Gulf Stream and required an easterly wind to get her back. Weather reports earlier told of gales in the Southern waters. The Coast Guard reported that the ship's plight had been observed and reported by the passing steamship Raleigh Warner at Jacksonville, which then sent out the Coast Guard cutter, Yamacraw to take her in tow. The New York offices of the Coast Guard reported that the schooner had lost her sails and her supply of water was gone. Otherwise, she was in good condition.

Then on November 28, 1937, the Coast Guard reported the cutter Champlain had taken in tow for New York the Anna R. Heidritter. Apparently, the night before she had collided with the Red Star liner Pennland about forty miles east of Sandy Hook. The schooner suffered damage to the bowsprit and fore rigging.

Captain Bennett Coleman commanded her since 1919.  "While carrying logwood from Charleston to Pennsylvania she hit a storm off Ocracoke & was washed ashore on May 2, 1942.  With her back broken, the crew lashed themselves to the masts.  All crew was saved.  Captain Coleman died in an auto accident in NJ March 12, 1942, nine days after being rescued." (taken from http://www.villagecraftsmen.com/goodwin1.htm#heidritter)