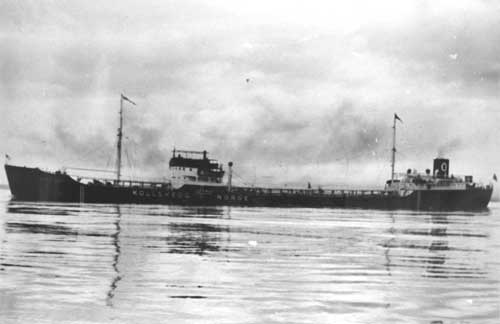 The Sinking of the Kollskegg:

On June 19, 1940, the Kollskegg commandeered by Captain Ole Sørensen left a convoy, HGF-34 after two ships in the convoy were torpedoed by German U-boat, U-48. The Kollskegg arrived at Falmouth having transported 15,000 tons of oil. Captain Sørensen was severely reprimanded for going against the orders and leaving the convoy. The following day, the ship was ordered to Southampton to unload its cargo. Because of the massive number of ships arriving from France with refugees, it was unable to unload its cargo for several weeks.

Then on July 21, 1940, the Kollskegg set out with another convoy, CW-7 headed west. On its journey, the convoy was attacked several times by nearly 80 German aircraft. The Kollskegg itself was attacked by twelve aircraft and hit by five bombs. Of the five, three bombs fell through the ship without detonating, while the other two caused serious damage and set fire to the tanker. Onboard a British gunner was killed, as well as seven men were injured (four seriously). The crew was taken to Portland by a destroyer. The tanker was tanker to Dunnose, Isle of Wright, and beached. On July 23, the Kollskegg was then taken to Southampton to be repaired. By September, she was up and running and departed for South Bank. Four days later, she went into being docked and stayed there until June 1941.

According to records, the Kollskegg set sail with Convoy OB 339 headed to Aruba. The convoy originated in Liverpool on June 26, 1941, and arrived in Halifax on July 12. She arrived in Aruba on July 20. After this, there were two voyages made to South Africa before heading back to England. There were other convoys the Kollskegg was a part of, Convoy Hx160 from Halifax on November 15 and in December heading westbound with the North Atlantic Convoy ON48 which left Liverpool on December 19 and arriving in New York on January 3, 1942.

On January 26, 1942, the Koolskegg is listed as a member of Conoy HX172 and in March with Convoy OS21, which left Liverpool on March 4 and arrived in Freetown, Sierre Lione. Her next stop was to be Aruba. She arrived in Curacao on March 26.

From here new orders were given to the captain, Leif Soyland, and departed from Willemstad, Curacao on March 29, 1942, to head back to the U.K. via Halifax to meet up with a convoy that would escort her back. Aboard the tanker was 8000 tons of Colon residue and about 6,300 tons of fuel oil for the Anglo American Oil Company.

On the way up the coast on April 6, 1942, at 8:58 PM, the Kollskegg was hit on the starboard side amidships by two torpedoes from the German U-boat, U-754. At the time, they were about 350 miles northwest of the Bermudas. After being hit, the tanker stopped for a while but then continued on at full speed towards Hampton Roads (a body of water that serves as a wide channel for the James, Nansemond, and Elizabeth rivers between Old Point Comfort and Sewell's Point where the Chesapeake Bay flows into the Atlantic Ocean, and the surrounding metropolitan region located in southeastern Virginia and northeastern North Carolina portions of the Tidewater region).

At 2:18 AM, on the morning of April 7, the tanker was once again hit by another torpedo. This torpedo hit its mark. It struck the engine room and within four minutes the Kollskegg sunk. Four crewmen were killed in the attack. The remaining thirty-eight abandoned the ship in three lifeboats. Two of the lifeboats which held 30 men, including the captain, were rescued by Bushranger (a Panamanian merchant ship) after 21 hours and taken to Nassau, Bahamas on April 11.  On the evening of April 7, the third lifeboat stayed with two lifeboats from the Koll (a Norwegian tanker) which had been sunk by German U-boat U-571 on the night of April 6. The boats traveled together for a while until the winds picked up to gale force speed and they became separated. The eight survivors of the Kollskegg were finally rescued by the HMCS Niagara (a Canadian destroyer) on April 14 and taken to Halifax two days later.