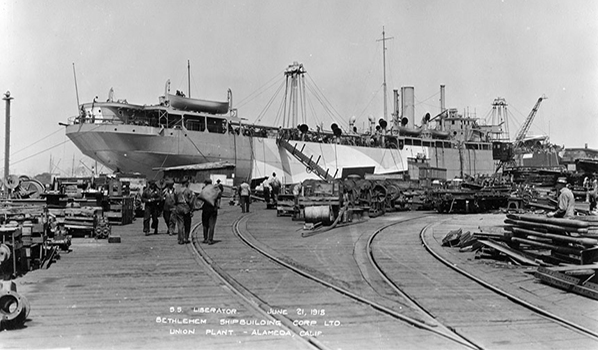 Liberator on June 21, 1918, while at the Bethlehem Shipbuilding Corp. in Alameda, CA. Photo courtesy of the National Archives.

The Sinking of the Liberator:

The Liberator was built during World War I. It was modified during the war and was designated as the USS Liberator. It served as a troop transporter carrying troops from St. Nazaire, France back to the United States. It made five trips in total. In 1919, it was decommissioned and remained in surplus until 1933. At that time it was bought by Lykes Brothers Steam Ship Company and served as a cargo ship.

Liberator had picked up 11,000 tons of sulfur in Galveston, Texas, and was headed for New York.

As has been mentioned regarding other ships sunk in March of 1942, the whole east coast was on high alert. The Navy tried to provide protection with patrol boats. However, there just wasn't enough to guarantee safe passage. Liberator continued as a commercial vessel but was outfitted with deck guns and gunners for protection against U-boat attacks. This was one way the Navy could assist in protecting these ships as they traveled along the torpedo alley.

It was mid-March and the area off the Diamond Shoals had seen action every night the previous week as Liberator made its way towards that area. Liberator's armed guards were a bit nervous because of all of the attacks that occurred. The entire gun crew sat at their gun post on the fantail and were keeping a lookout for any suspicious vessels. Sailing alone the freighter was following the Navy Number 5 zigzag pattern by day and being blacked out at night. So there was Liberator passing Cape Lookout, North Carolina, and saw a tanker burning. No less than three U-boats were operating in the area. Between the three they had tried to destroy every ship they encountered. First, it was the Papoose. Then there was a running gun battle involving the Mercury Sun and the Gulf of Mexico. Both were shelled and set afire but were able to escape. Then before midnight, the W.E. Hutton was sunk.

So here comes Liberator hearing radio traffic saying the U-boat responsible for all of this chaos was still in the area. Needless to say, the level of anticipation and nerves were running high. The captain ordered Liberator to accelerate to full speed to move out of the area. In the meantime, miles away in the dark the USS Dickerson's radar crew picked up a fast-moving surface contact near the burning tanker and thought it was a fleeing U-boat. So at full speed and blacked-out, the Dickerson headed towards the fleeing ship. The ship happened to be the Liberator.  Unfortunately, the Liberator's crew didn't know the Dickerson was in the area to assist the damaged tanker. They immediately opened fire on the Dickerson resulting in the death of several sailors. The captain was also injured and as he laid dying on the bridge. He ordered the ship to turn full speed away and head back to Norfolk, Virginia. The captain died shortly before making it to port the next day. Because of this mixup, Liberator lost its chance to ensure protection as it headed north.

With all the activity in the area, it caught the attention of the German U-boat U-332. Liberator having sped away from what they thought was a battle with a u-boat the night before, headed away from the area the following morning. As it approached the Diamond Shoals at dawn with good visibility. Just after 10:00 A.M., the ship passed the Diamond Shoals Lighted Buoy three miles to the starboard. Ships would often cut inside the buoy to avoid the open sea and deep water where U-boats tended to focus their attention. Two other ships were in the area (within a quarter-mile) that gave a false sense of security. However, Johannes Liebe was a crafty U-boat commander. He brought the U-boat close to shoals. The U-332 now had a target within sight. It fired two torpedoes that hit the ship setting the cargo on fire and killing five crew members. Other crew members had attempted to enter the engine room to look for survivors. However, the sulfur fumes prevented the crew members from entering the engine room.

The first torpedo ripped into the Liberator's hull as it was changing course. heading northward. The explosion destroyed the engine room and the deck above, as well as blowing one lifeboat into smithereens. The ship was now without power and out of control. The Liberator had turned from a confident ship the night before, thinking that it had taken on the challenge of a U-boat, to being a sitting duck. Captain Johnson ordered the crew to abandon the ship. The radio operator quickly sent out an SOS and fled the control room before receiving a response. The captain quickly disposed of the secret codes.

The Liberator's gun crew, who the night before was on high alert, saw no signs of the enemy. However, the crew on the Chester Sun was witnessed to the torpedoing of the Liberator. In fact, the Chester Sun even attempted to ram the U-boat and sent an SOS on behalf of the Liberator. Thirty-five men climbed into two lifeboats and escaped the sinking freighter. It only took 30 minutes for the ship to sink. A half hour later the Navy tug boat Umpaqua (ATF-25) arrived and took the survivors and transferred them to Morehead City. 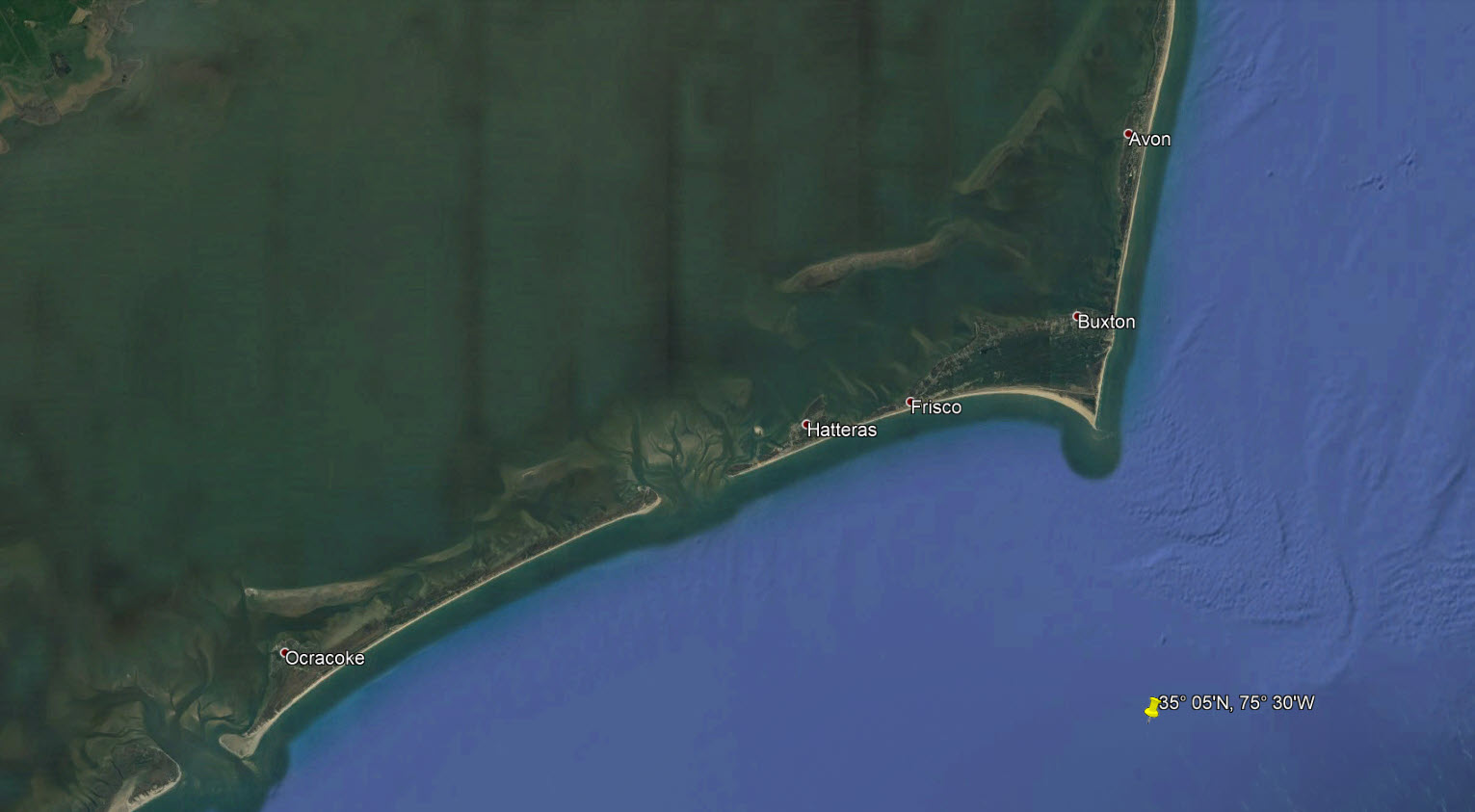 Photos of the Liberator: