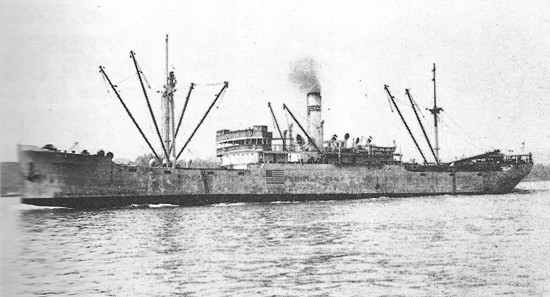 The Sinking of the Alcoa Guide:

The ship left Weehawken, NJ on April 9th heading for Pointe-á-Pitre, Guadeloupe. Onboard it had 5890 tons of general Army supplies, including 8 gas storage tanks, metal piping, flour, cement, lumber, beer, trucks, and automobiles. The captain of the ship was Samuel Leroy Cobb. At 3:55 A.M. the German U-boat, U-123 began its attack on the unarmed and unescorted Alcoa Guide. The u-boat was under the command of Reinhard Hardegen at the time of the attack. U-123 pursued the ship for six hours about 300 miles east of Cape Hatteras. At this point, the u-boat ran out of torpedoes and had only 29 rounds for the deck guns left. Due to this shortage, they moved closer to the Alcoa Guide and opened fire with the deck gun and the 37mm and 20mm AA guns while running a parallel course approximately 400 meters away. The first shell struck the starboard side on the salon deck. Captain Cobb ordered his helmsman to turn the wheel hard to starboard and try and ram the u-boat. Shortly thereafter, a shell struck the bridge, fatally injuring Cobb and jamming the rudder. With the rudder damaged, the ship began circling out of control with the engines still running. Because of a damaged ammonia condenser, the men couldn't reach the engine room to stop the ship. The u-boat fired its last shells into the waterline and then ceased fire. This allowed the eight officers and 26 men a chance to abandon the ship in two lifeboats. The u-boat had fired 27 rounds of 10.5cm, 86 rounds of 3.7cm, and 120 rounds of 2cm ammunition. After all of this bombardment, the Alcoa Guide finally capsized to the starboard and sank at 5:23 A.M.

The 27 survivors in the lifeboats were rescued on April 19th by the USS Broome (DD 210) and landed at Morehead City, NC. Four other survivors got away on a raft and became separated from the boats. At 4 P.M. on May 16th, the Hororata located the raft at 34°35N/71°08W. Unfortunately, only one man (Jules Souza) was still alive.

*He survived almost a month on a raft after the sinking.

Location of Jules Souza's raft when he was rescued.