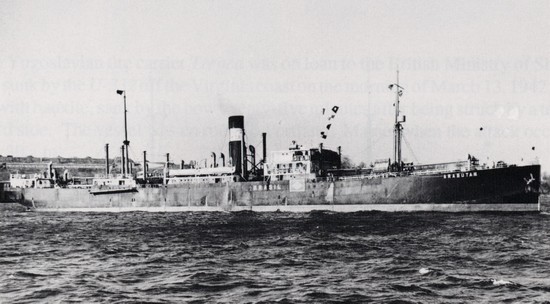 The Sinking of the Arabutan:

Built in 1917, she was purchased by Navigazione Generale Italiana, Genova and renamed Caprera.

In 1932 she was sold to Societa Italia Flotte Riunite then was declared a total loss after grounding in June, 1932 at Baía da Guanabara (Guanabara Bay), near Rio de Janeiro. Later the wreck was salvaged, purchased by Lage & Irmãos and rebuilt at the company's shipyard at Ilha do Viana (Viana Island), Rio de Janeiro.

On March 8, 1942, the American coast guard cutter Calypso rescued 54 survivors of Arabutan and transported them to Little Creek, Virginia after being attacked by German U-boat U-155 according to ubootwaffe.net. However, the New York Times dated March 10, 1942 reported that they suspected it was an Italian U-boat that had joined forces with the Germans. They report 55 of the 56 crew members were rescued and brought to Norfolk after twenty-six hours at sea. The Arabutan was the third Brazilian ship sunk in United States waters in less than a month.

Survivors reported she was sunk by an Italian submarine. If these reports were true it would have been the first substantiated report of claims made by Radio Rome. The ship's third officer, Hosé Lobo de Maderiros, stated the submarine came close enough to the lifeboats for him to observe four men in the conning tower. "They were small of stature, of swarthy complexion and all appeared to have black hair," he told the United Press. "This lead us to believe they were Italian." However, there were no markings on the submarine to confirm this speculation. One member of the crew, Manoel Florencio Goiimbra, was killed by the explosion. He was asleep in his bunk when the missile struck.

One of the survivors was Elyseau ProphetaNascimento, who was also aboard the first Brazilian ship sunk, the Buarque, in United States waters on February 15, 1942. Third officer Maderios went on to report that the submarine struck without warning in mid-afternoon. He was on the bridge with the captain at the time. "The captain notified all aboard to stand by the lifeboats. We stood there for about five minutes and then he gave the order to abandon ship. We were loaded in four lifeboats. We pulled about 200 or 300 yards away from the ship and waited until she sank, which was about twenty minutes after we abandoned ship."

The men in the lifeboats were left in fear as the submarine, after coming to the surface, began circling the lifeboats. Finally, two United States Navy planes came over and the submarine immediately dived. The Navy planes dropped a buoy, which leads the men to think they were about to be rescued. However, no one returned. The next morning at around 8:00 they saw a boat, but it didn't see them. It was until 6:00 PM that the Calypso rescued them. 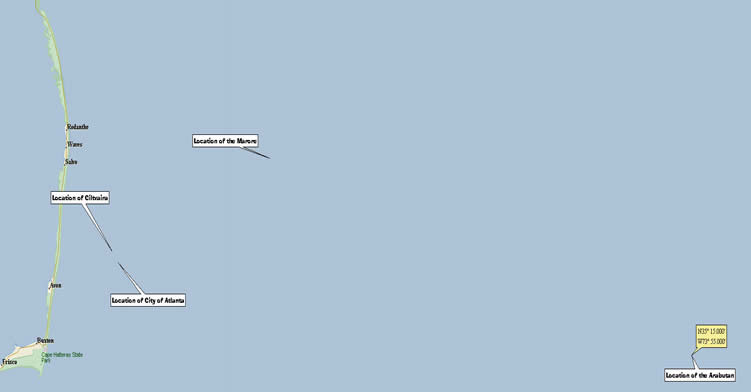