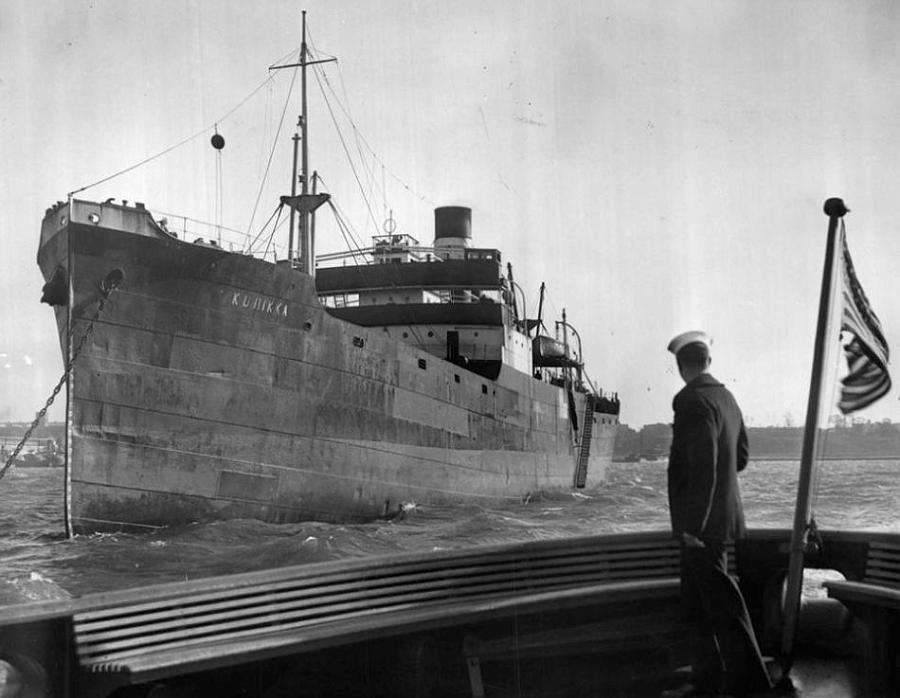 Chenango under her former name Kurikka in 1933.

The Sinking of the Chenango:

The ship began its life in August 1918 as the British War Hamlet for the Shipping Controller - W.H. Cockerline & Co. of London. A year later, in 1919, it was renamed the Newaster for the Aster Shipping Co. Ltd(E.R. Brown & Co.) of Cardiff. In 1933, it was sold to Finland and renamed Kurikka for Vaasan Laive O/Y, Wasa. The Chenango was taking over by the U.S. government from the Finnish Government. It was then turned over by the War Shipping Administration on December 27, 1941, at 10:00 AM at the port of New York. By December 30 at 12:00 PM, it was then turned over to Moore Mccormack Line under a General Agency Agreement (GAA). It was renamed the Chenango and registered in Panama.

The Chenango had left Rio de Janeiro and was headed to Baltimore via the Virgin Islands. The cargo that was on board was manganese ore. The crew was made up of 38 men. There were 14 different nationalities that made up the crew. There were Americans, Danes, Norwegians, Estonians, Swedes, Chileans, French, Portuguese, Canadians, Columbians, Belgians, Spanish, Philippianno, and Irish.

At 12:30 AM on April 21, 1942, the unescorted and unarmed was hit by a torpedo on the port side between #4 and #5 hatches. The attack came from the German U-boat U-84 commandeered by Oberleutnant zur See Horst Uphoff. The torpedo strike was so powerful that its topside personnel and loose equipment were thrown overboard. Water poured through the gaping hole in the hull. It took only two minutes for the ship to sink.

Numerous problems ensued after the explosion. First due to the sudden attack and quick sinking no distress signal was sent. Also, all but one of the lifeboats went down with the ship. The one that survived, to make matters worst, capsized. Due to the life rafts being improperly stowed on the deck, they were destroyed by the riggings above the rafts. Lucky for the only two survivors, James Bradley and Joseph Dieltiens were able to cling to the raft.

Unfortunately, the only raft that survived was one that had been condemned in New York and the only supplies on the raft were water and a fishing line. Bradley was Irish and Dieltiens was Belgian, so neither understood the other's language. Dieltiens suffered internal injuries during the blast and was hemorrhaging internally. When help had arrived shortly after the sinking, they decided they would ration the water and any fish that they caught. Day after day passed without rescue. Coldwater continuously washed over their raft, which resulted in them being constantly wet and cold.

As they floated on the sea, over and over patrol planes would fly by without seeing their raft. They were not very successful with their fishing effort. At the same time, their water supply was diminished. Each day they grew weaker. Finally, after twelve days of floating on the Atlantic, an Army plane spotted the raft. The ship had been sunk just south of the Virginia border. However, the raft had drifted south to southeast of Oregon Inlet, North Carolina. Finally, they were discovered when the plane flew low enough for the pilot to see the two men waving frantically to call attention to their desperate situation. The pilot then called in the base and immediately a rescue plane was sent out. Captain Richard Burke flew his PH-2 seaplane and was able to land successfully on the rocking ocean. The two semi-conscious and delirious men were taken aboard the seaplane.

The men were immediately taken to the Marine Hospital a the Norfolk Naval Base. Bradley was quickly able to recover and soon was back on his feet. However, due to the severity of his internal bleeding, long-term exposure to the elements, and lack of food and water, Dieltiens died two days later.

The Chenango's location was not known unit after the war. The Allied Command used German U-boat records which indicated successful strikes against merchant ships to pinpoint its location. In 1956, the wreck was dragged to the least depth of one hundred feet.

Statement of TERRANCE J. BRADLEY, the sole survivor of the SS CHENANGO
We were about six days out from St. Thomas when the torpedo hit. I was in my quarters in the forecastle with three other ABs and an Ordinary Seaman plus a Fireman. The lights went out and we were thrown around the room. We ran forward and up the escape hatch to the poop deck where we were covered in water up to our waist. I was the first one out and I don't know what happened to me but I think I was drawn under by the suction of the ship as it sank. I did not have a life jacket on.
In about half an hour I got on a raft that floated near me.I swam to the raft and got aboard. No one else was on it.
A few minutes after I got on the raft, Joseph Dieltins, the Chief Steward, swam to the raft and I helped him aboard. A few minutes later one of the Estonian A.B.'s was swimming toward our raft but when he was within 25 yards of the raft, he just disappeared under the water. Another Estonian A.B. was clinging to a hatch cover some distance from the raft. I don't know what became of him.
The 2nd Engineer, Sverre Ellingsen, was holding on to a hatch cover as the sub cruised among the men in the water and I heard him cursing the U-Boat. Carlos Rodriguez, an O.S., was clinging to a hatch cover and screaming. I did not see any of them go under the water nor did I see any other member of the crew at this time. We were the only ones who got on the raft. A heavy sea was running and there was an offshore wind which reached gale force by morning.
The following morning I could not see any wreckage or bodies and the gale was still blowing. The raft started to break up. Dieltins and I had to keep working to keep it together.
There was no food on the raft, only a water keg holding about 10 gallons. There were no oars, no sail, and no anchor. This raft had been condemned in New York and the equipment and provisions from that raft had been placed on the other rafts on the CHENANGO.
Four or five days later, we had some calm weather for 2 days. There was a line on the raft with a hook on it. I baited this with a crab which we got in seaweed. I managed to catch a large fish about 5 feet long and weighing about 100 pounds. Before I could get this fish on the raft, a shark took half of it. We tried to eat some of it but it made us sick.
On the second calm day, Dieltins started to go crazy. He wanted to make a cake and acted as if he was preparing the meals on the ship. A few days later he lay down on the raft and would not get up. I gave him water from time to time. He talked as if he were insane.
We did not see any ships but several planes passed close by. About the 11th day a U.S. Army plane dropped us some food in a rubber bag. We both had some chocolate.
The next morning, the plane was back again and circled overhead for 4 or 5 hours. It dropped a small package but it was too far away for us to reach it. Then I must have gone to sleep for a while because the next thing I knew a Coast Guard PBY flew over us, dropped smoke bombs, and then landed and taxied toward the raft.
Finally, a line was thrown from the plane which I made fast to the raft. At this time, Dieltins jumped overboard and I had to pull him back on the raft. As the plane neared the raft, several men grabbed both of us, Dieltins first and then me, taking us aboard the plane. We were taken to the Marine Hospital in Norfolk and placed in the same room on Saturday afternoon. On Monday morning, Mr. Dieltins died in that room.
The Master, Rasmussen, was a very strict skipper. He had ordered the ship blacked out even before sunset. We were zigzagging too, making about 8 knots when we were hit. The CHENANGO went down very fast after the torpedo hit, easily within a minute. 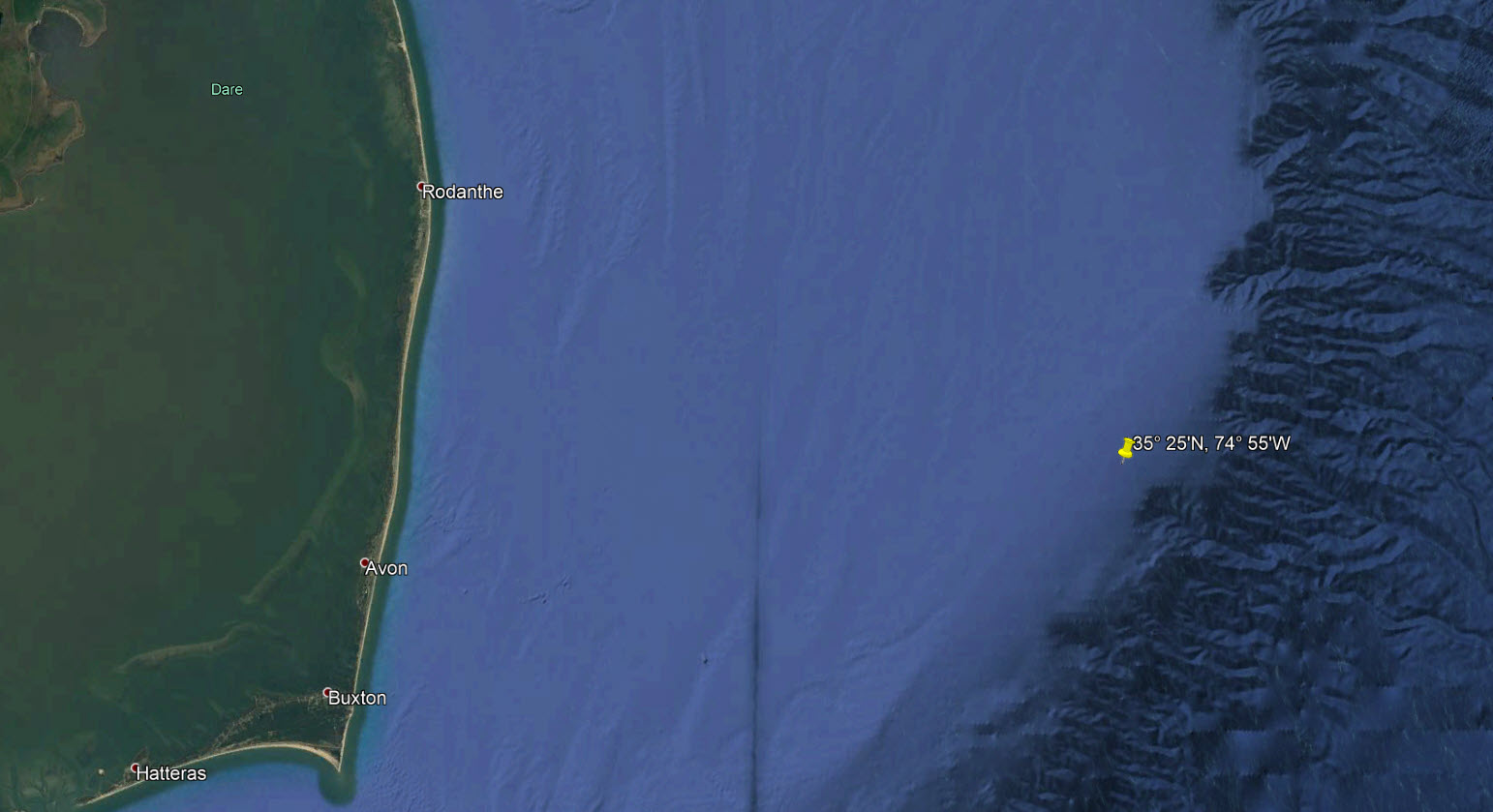 * Rescued himself with James Bradley on a raft. He was picked up 12 days after the sinking of Chenango. He died on May 4, 1942, with severe gastrointestinal hemorrhage at the U.S. Marine Hospital in Norfolk, Virginia.