The Sinking of the Raritan:

The Raritan was built in 1919 at Wyandotte, Michigan, and was originally called the Lake Fairton. It was later renamed the Detriot-Wayne. In its early years, it spent the time hauling freight in the Great Lakes. It was regarded as a tramp freighter in that it would carry a shipment to one port and from there pick up another cargo take it to its destination and pick up another cargo. It would repeat this pattern for a number of years. It was then acquired by the Raritan Steamship Corporation of New York. In viewing its itinerary for 1941 showed the ship making stops in New York, Trinidad, Mobile, Delaware, Cuba, Philadelphia, Cristobal, St. John's (Newfoundland), Boston, Wabona, Baltimore, Laguaira, Paramaribo, Philadelphia, New York, St. John's, Boston, St. John's, New York, and Argentia.

In 1942 she headed from Cornerbrook, Newfoundland to New York with Captain Otto Lohr in command. There the Raritan unloaded the cargo, picked up the new cargo, and headed south towards Cristobal, Canal Zone. In late February 1942, in  Buenaventura, Columbia she picked up a cargo of coffee and was headed to New York. The provision that vessels must keep as close to shore as safe navigation permits due to the frequent attacks by the Germans, had likewise increased the hazards of the voyages. On leaving the canal, she was given two positions, one-off Jacksonville, the other off Diamond Light, by which she should guide her course. While at sea off Florida, these orders were changed by a coded message advising her to remain as close inshore as possible. Throughout the trip north, the weather was extremely bad. The captain stayed on deck for ten straight days without even taking off his shoes. On the twenty-fourth, the Raritan was very close to Frying Pan Shoals but since the exact position was uncertain due to bad weather, the captain had been unable to get a fix for some time. Due to wartime regulations, the Raritan's radio was sealed (fuses were removed and the electrical panel locked). In an emergency, the panel could be unlocked and the fuses replaced but unless this took place, radio silence was to be maintained. They could listen to traffic, but not engage and give away the ship's location.

About midnight, the ship grounded on a shoal eighteen miles off Cape Fear. A distress call was put out to the Frying Pan Shoals Coast Guard Station.  Once the call was received the motor lifeboat, #4405, was put out to sea. The U.S. Coast Guard cutter Calypso arrived at the scene and reported "One lifeboat partly showing. Marked wreck with red flag."  It also mentioned the wrecked remains laid in twelve fathoms (72 feet) which indicated it had slipped off the shoal into deeper waters. It is not clear when the ship broke into two parts. All crew members were rescued. The sinking didn't receive a lot of attention due to the number of ships that were being sunk by German U-boats. This was one ship that sunk due to nature rather than wartime acitivities.

Today, the wreck is 20 miles from the "2CF" Buoy off the mouth of the Cape Fear River on a heading of 163 degrees. 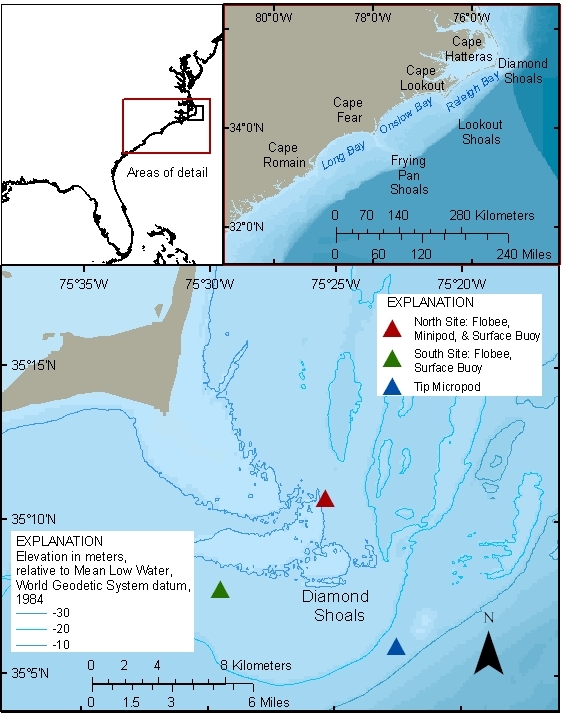