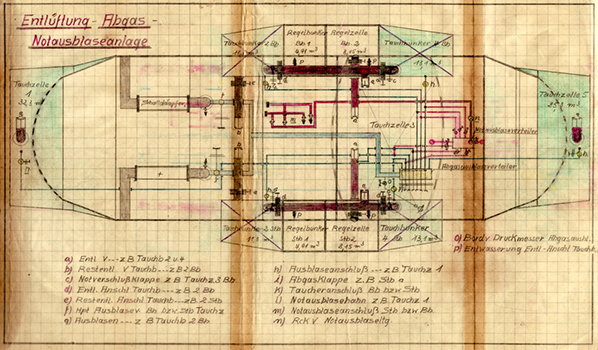 From January through April 1942, the German U-boat attacks off the East Coast were very successful as far as the Germans were concerned. It was as if the ships traveling along the coast were easy target practice for these U-boats. It seemed as if nearly every day another ship was being sunk.

Meanwhile, the U-85, a 220-foot long VIIb U-boat was launched in early 1941. Katpitänleutnant Eberhard Greger was the commander of the U-boat. The U-boat's first tour of duty was off the coast of Norway to attack British convoys. On September 10, 1941, they encountered their first British convoy. The first attack under air cover was unsuccessful. They fired five torpedoes which went wide of their target. However, this didn't dissuade Greger as he continued to pursue the convoy through heavy seas. Not only did they have to avoid air attacks, but the U-85 also had to avoid American destroyers that continually attempted to drive the submarine away with gunfire and depth charges.

This continual hide and seek strategy continued into the following day. On September 11, 1941, the continual pursuit paid off. The first torpedo made a direct hit on a British freighter, Thisleglen. Of note, other sites state the attack was on September 10. The result of this attack resulted in a massive counter-attack by the Canadian escort HMCS Skeena and HMCS Alberni. Both ships launched a depth charge assault on the U-85. The day after this attack, the U-85 resurfaced and attempted to conduct repairs. However, the damage was too great and the U-boat had difficulty with diving. The U-85 abandoned their mission and headed to port at St. Nazaire, France for repairs.

After repairs were made the submarine left for its second mission after refueling and getting fresh provisions in Lorient on October 11. The second mission took place in the North Atlantic in the area of Newfoundland. To her disappointment, this second mission was unsuccessful in that no ships were sunk while on patrol. They spent 43 days on patrol and spent their time being occasionally depth charged by planes. At the end of this mission, they returned to Lorient.

On January 8, 1942, the U-85 headed out for their third mission. Since their last mission, the United States had entered the war, and U-boats were posted along the East Coast of the United States. The U-85 positioned itself between Newfoundland and Nova Scotia and waited for ships to enter the area. It wasn't until January 21 when it attempted its first attack on a 10,000-ton steamer. The crew believed that it hit the steamer with at least one torpedo. However, the ship didn't sink and continued on its way. On February 8, 1942, the U-85 teamed up with U-654 to attack Convoy ONS 61. The U-654 was successful in sinking one vessel. The U-85 fired at least three torpedoes but was unsuccessful in hitting a target. However, the following day they spotted the British freighter Empire Fusilier and were successful in sinking the ship.

On its fourth mission, the U-boat headed out to the East Coast of America on March 21, 1942. The crossing to America took nearly three weeks. Its patrol area was between New York and North Carolina. On April 10, while off the coast of New Jersey it sunk the Sweedish freighter, Christina Knudson. The 4,904-ton freighter had left New York on April 8 and was heard for Capetown, Africa.  After their success, the U-85 headed for Cape Hatteras, North Carolina.

On April 13, 1942, the U-85 was sitting in shallow waters off Bodie Island lighthouse waiting for any passing ships to come along as its next target. Meanwhile, the USS Roper (DD-130) was patrolling the area. The Roper was a flush-deck (Flush deck is a term in naval architecture. It can refer to any deck of a ship that is continuous from stem to stern), the four-stack destroyer. It was built in 1919. Earlier in the month (April 1), it rescued the survivors of the passenger-freighter City of New York, which had been sunk by U-160.

The night of April 13 was very clear and the seas were calm. The destroyer's engines coming in contact with surface plankton created a bioluminescent wake. That along with the light coming from Bodie Island gave the destroyer a reference point to where it was located. Because of the U-boat activity in the area, this particular patrol had onboard the Commander of Destroyer Division Fifty-four, Commander Stanley Cook Norton.

As the Roper patrolled the area at eighteen knots on a heading of 162°, at six minutes past midnight the radar made contact with an object bearing at 190° approximately 2,700 yards away. There seemed to be a wake ahead traveling at a high speed. Also, the sound man could hear rapidly turning propellers ahead that coincided with what the radar was detecting. At that point, the Roper increased its speed to twenty knots.

Lieutenant Commander Howe knew they were on to something. He rang general quarters and all duty personnel ran to their combat stations. The U-85 was on the run. However, being in shallow waters it had no chance of submerging. The U-boat turned to port in increments to see if the Roper had really spotted it or not. Still, the Roper wasn't sure what it was tracking. The destroyer moved closer and closer towards its target. As the distance between the two shrunk to 700 yards and the commander of the U-boat, Greger, knew they were in trouble, he fired a torpedo from the stern tube in a last-minute attempt to hit the destroyer. Luckily, for the Roper and of course unfortunate for the U-85, the torpedo moved past the port side and across the Roper's wake.

Afterward, the U-boat made a hard turn to starboard. At that point, Lieutenant William Winfield Vanous, Executive Officer, ordered the 24-in searchlight onto the U-boat's conning tower. They could see that the German sailors were already on deck preparing the deck gun for battle. With the searchlight on the target, Chief Boatswain's Mate Jack Edwin Wright began firing his 50-caliber machine gun at the men on the deck of the U-boat with deadly accuracy. The impact of the machine gun was so powerful that several men were picked up and thrown into the water. It was easy pickings for  Wright as more men scrambled to get to their battle stations aboard the U-85. The conning tower became littered with dead and dying men. Also, the impact of the machine-gun fire began to destroy the outer skin of the U-boat and it was riddled with holes.

As the machine gun kept the Germans from counter-attacking, the Roper's 3-inch gun came online. The man at the gun, Coxswain Harry Hayman, landed his shots at the water line below the conning tower. His accurate shot breached the hull and now made the U-85 unable to dive. The U-boat was done for and the men on board began to flee the submarine, jumping into the water. The Roper knew it had its target cornered and prepared to fire a torpedo. Men from the U-boat continued to flee. As the Roper came up behind the U-boat it had disappeared beneath the surface.

Not sure what was going on, the Roper headed to the spot where the U-boat disappeared. As they approached this area, the sounds of German sailors could be heard in the surrounding waters. At this stage of the battle, the destroyer was more concerned with the total destruction of the U-boat than being on a rescue mission. The Roper fired a torpedo and eleven depth charges at the area it estimated the U-85 to be. Because of the fear that U-boats traveling in packs, after laying the depth charges, the Roper left the area. The following day after daylight (approximately, 7:00 AM), the destroyer returned to the area and recovered twenty-nine bodies. Prior to its arrival, a Navy PBY plane flew over the area to conduct a visual search. Lieutenant C.V. Horrigan could see oil slicks and a large field of debris. Still not sure if the U-boat was sunk, he dropped a depth charge in the area. Two more planes appeared shortly afterward and dropped smoke floats to draw attention to the bodies floating on the surface. Even as the Roper entered the area and began retrieving the bodies, at least one plane circled the area as a precautionary measure. At 7:30 AM, an observation blimp arrived to keep an eye out for any other U-boats in the area. At 7:50 AM, the first boat of two lifeboats sent out by the Roper returned with five bodies. At 8:50 AM, the sound operator detected a sharp echo at a range of 2,700 yards.

Even after all of this, there was still concern about the status of U-85 and perhaps other U-boats in the area. So at 8:57 AM, the Roper dropped four more depth charges in a straight line at seven-second intervals. These depth charges produced one very large air bubble and one smaller one, along with a new oil spill. Along with the twenty-nine bodies recovered, six escape lungs were found. Two bodies had mouth-piece tubings which indicated they had escaped after the U-boat sank. Numerous life jackets were found. Also, two of the bodies that were found were left to be sunk after being searched. This could have been done due to the severity of the explosion and how badly damaged the bodies were.

At 10:00 AM, two more depth charges were dropped over the largest air bubble. The U-boat sat in place and air bubbles continued to surface. The Roper placed an orange-colored buoy approximately two hundred and fifty yards away from the largest air bubble. That same afternoon the Roper docked at Lynnhaven Roads. There the twenty-nine bodies were transferred to the Naval tug USS Sciota (AT-30), which then delivered them to the Naval Operating Base at Norfolk. The bodies were then photographed, examined, and placed in shrouds. All clothing and personal effects were saved. On April 16, 1942, the bodies were placed in plain pine boxes. The sailors were later laid to rest in Hampton Roads, Virginia (see pictures below).

After all of the sinkings that the German U-boats were responsible for up to this time, no mention of this successful sinking of a German U-boat was found in the press. It wasn't until three weeks later that any mention of it was noted.  Even then, the story was vague and full of falsehoods. 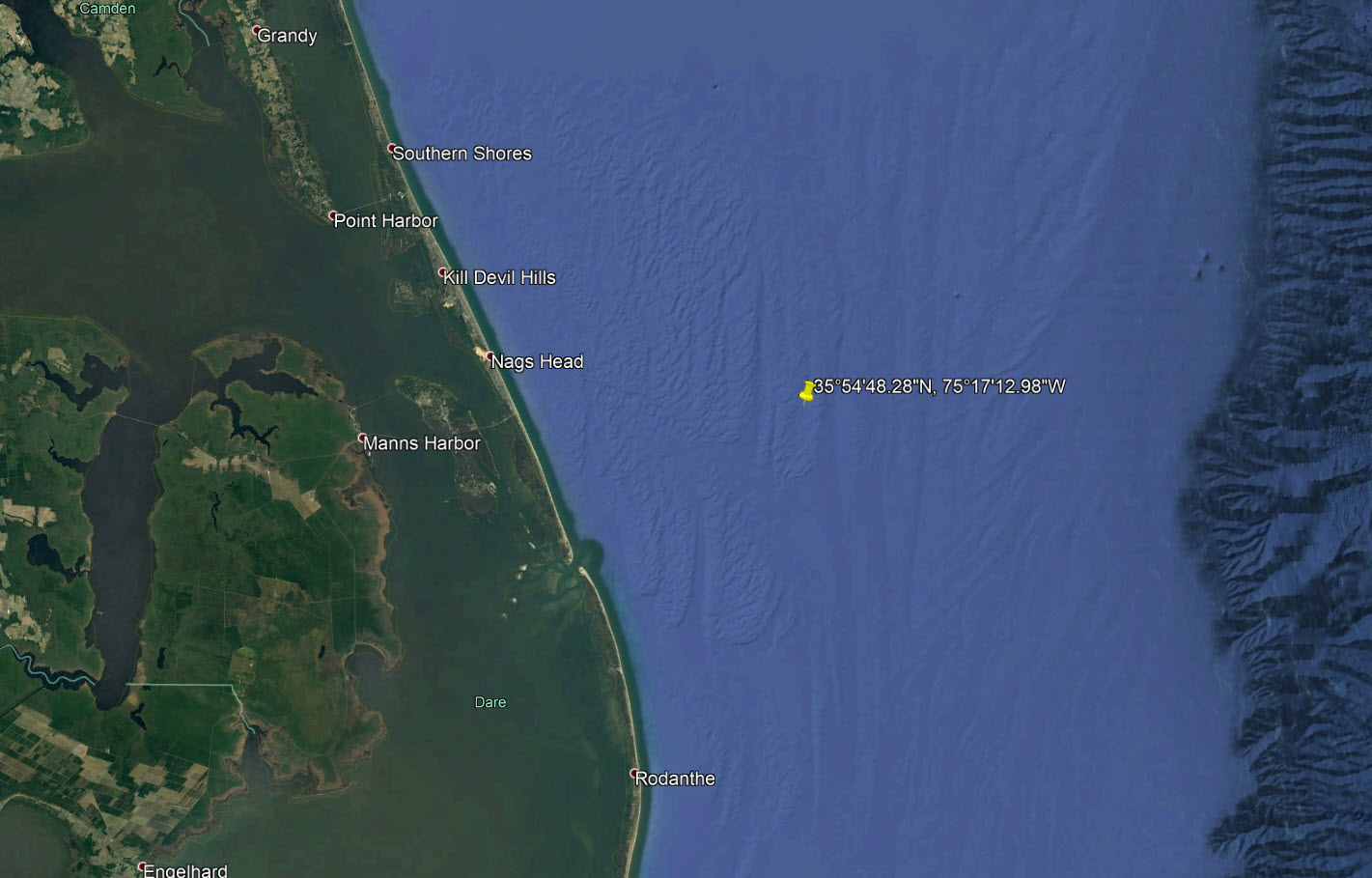