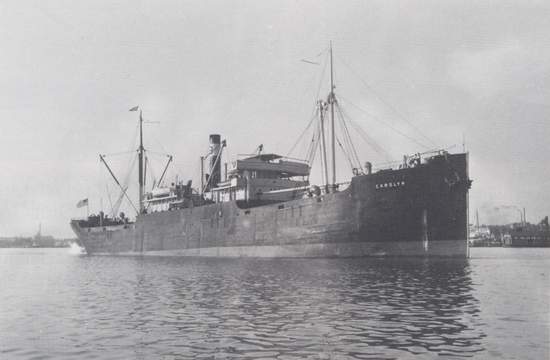 Carolyn before her conversion to USS Atik. Photo courtesy of SSHSA Collection.

The USS Atik was first known as Carolyn. The ship was launched on July 3, 1912, and given the name Carolyn, the granddaughter of the shipping firm's owner, Archibald Hilton Bull. Its first 30 years of service was spent carrying freight and passengers between the West Indies and ports along the eastern coast of the United States. During WWI, the ship carries aboard on 3 in. (76mm) and one 5 in. (130mm) gun. A Navy armed guard detachment also was aboard the vessel from June 28, 1917, to November 1918. The Navy designator the ship with the identification number 1608, but it wasn't a commissioned naval vessel.

As WWII broke out the Carolyn remained a part of the Bull line of ships.  By January 12,  1942, the British Admiralty’s intelligence community had noted a “heavy concentration” of U-boats off the “North American seaboard from New York to Cape Race” and passed along that fact to the U.S. Navy. Then on January 31, 1942, a dispatch from the Chief of Naval Operations requested the Carolyn, as well as the Evelyn, "be given a preliminary conversion to AK (cargo ship) in the shortest possible time." A follow-up letter on February 12 from the Chief of the Bureau of Ships defined "shortest possible time" as of March 1, 1942, as the date to outfit the vessels according to the specifications indicated.

Over the next few weeks, the ship was given its main and secondary batteries, as well as sound gear. It maintained its appearance as a cargo ship. This is when it took on the name Atik (AK 101). However, it was to still use its previous name (Carolyn) when communicating with friendly vessels and stations. If it encountered any enemy ships it was to identify itself as SS Vill Franca, of Portuguese Registry.

The USS Atik was placed in commission at 4:45 PM on March 5, 1942, at the Portsmouth Navy Yard, Kittery, Maine. Lieutenant Commander Harry Lynnwood Hicks was placed in command of the ship. It was loaded with pulpwood to assure floating capability. Its mission was to lure U-boats into attempting a torpedo attack. The strategy was a U-boat would not waste its torpedoes on such a vessel. Instead, it would come to the surface to sink the ship with gunfire. Referred to as a q-ship, it was to serve as a decoy ship to lure those U-boats to the service and then open up an attack to sink the U-boat. Also, a part of the plan was as these decoy ships were under attack, other ships in the area would come to assist in the attack of the U-boats. However, they received word in March 1942, that they had little chance of receiving assistance if trouble arose.

The USS Atik completed its renovations and sea trials and officially got underway on March 23, 1942. On the night of March 26 going into the early morning of March 27, the ship was 300 miles east of Norfolk, Virginia. The Atik began to be stalked by U-123 on her second patrol off the eastern seaboard at approximately 10:00 PM on March 26. At 12:37 AM on March 27, 1942, the U-123 fired its first torpedo from 700 yards away. The torpedo hit the ship on the port side, under the bridge. A fire broke out immediately and the ship began to slightly list. As U-123 proceeded around under her victim’s stern, Kapitänleutnant Hardegen duly noted one boat being lowered on the starboard side and men abandoning the ship. Radio stations at Manasquan, New Jersey, and at Fire Island, New York intercepted a distress message: SSS SOS Lat 360ooN, Long. 70-00 W, Carolyn burning forward, not bad. Two minutes later, a second distress message sounded a bit more distressing: Torpedo attack, burning forward, require assistance.

After U-123 turned to starboard, Atik gained minimum speed and was able to steer a course paralleling the enemy’s course by turning to starboard as well. The Atik then dropped her concealment, opening fire from her main and secondary batteries. The first 4-inch shell missed the U-boat, as she took off away from the Atik, thus presenting a small target,   Heavy .50-caliber machine gun fire ricocheted around the U-boat’s decks as she speeds to escape the trap into the U-boat was lured into. One bullet mortally wounded Fähnrich zur See Rudi Holzer, on U-123’s bridge.

Gradually, the U-boat pulled out of range behind the cover of the smokescreen emitted by her straining engines, and her captain assessed the damage. As Hardegen later recorded, “We had been incredibly lucky.” U-123 submerged and again approached her adversary. At 02:29 AM, the U-boat launched another torpedo that struck the Atik's machinery spaces. The U-123 now sat in waiting to watch for the results of their recent attack.

Once again, Atik’s men could be seen embarking in her boats. U-123 surfaced at 3:27 AM to finish off the ship. Suddenly, at 3:50 AM, a fatal explosion blew Atik to pieces. Ten minutes later, U-123  buried her only casualty, Fähnrich zur See Holzer, who had died of his wounds. Atik’s entire crew perished, either in the blast that destroyed the ship or during the severe gale that lashed the area soon after the ship disintegrated.

The next morning, a USAAF bomber dispatched to Atik’s last reported position found nothing. The destroyer Noa (DD-343) and the tug Sagamore (AT-20) steamed toward the area as well. Heavy seas forced Sagamore to return to port, but Noa remained in the vicinity and ultimately sighted wreckage from Atik.

On April 9, 1942, Radio Berlin reported that a U-boat had sunk an adversary after a “bitter battle” but did not elaborate. “For administrative purposes,” Rear Adm. Russell Willson, wrote in a memorandum for the Chief of Naval Personnel on 2 July 1942, “the subject ship [Atik] should be considered to have been lost on 27 March 1942.” He added: “Aside from such notifications as having already been made to dependents, no further publicity will be given to the loss of this ship.” Not until after the war did translate Kriegsmarine records shed light on what had become of Atik.

Atik received one battle star for her World War II service, for her battle with U-123.

.*Brothers who both perished

A  listing of the surviving crew: None

Photos of the USS Atik: