Allan Jackson used to be known as the Crampton Anderson

The Sinking of the Allan Jackson

Allan Jackson was a tanker traveling from Cartagena, Columbia to New York. The week before her sinking, she had picked up 72,870 barrels of crude oil, which was near to capacity. The crew consisted of thirty-five officers and men.

The beginning of a long list of ships that were attacked by German U-boats began with the Allan Jackson. This area of the Atlantic would become known as Torpedo Alley. On the morning of January 18th, 1942 at 1:30 AM, Captain Felix W. Kretchmer was in his bunk resting. Second Mate Melvin A. Rand had the duty on the bridge. Seaman Randolph H. Larson was at the wheel. Boatswain Rolf Clausen was en route to relieve Seaman Hamon Brown of lookout duty. Their normal routine was soon to be disrupted.

At 1:35 AM the U-66 launched two torpedoes that struck the Allan Jackson. The first torpedo hit the forward tank on the vessel's starboard side and exploded beneath an empty cargo hold. The damage was reported to be minor. The second torpedo hit even closer to the bow. The force of the explosion was so severe that it split the tanker into two. The oil cargo began to leak out in all directions.

The second explosion threw the captain to the floor and flames erupted within his quarters. The captain was able to escape out of a porthole. Meanwhile, Rand and Larson were knocked overboard by the force of the explosion. Seaman Nox and Brown, closer to where the torpedo made contact were dead. Boatswain Clausen discovered that lifeboat 1 was a wreck, lifeboat 2 was jammed, and lifeboat 4 was surrounded by flames. Only lifeboat 3 remained useable. The boat was lowered and eight members of the crew jumped inside. As reported by Clausen, their lifeboat the crew of the lifeboat faced several obstacles to survive. They faced drowning or being burned to death. However, a third a greater danger was facing them. They were being pulled beneath the propeller. Fortunately, the crew was able to push against the stern of the ship with the oars. But they were not out of trouble yet. After escaping the giant propeller, they were now heading towards the massive burning oil astern. Fortunately, the backwash from the propeller forced a clear path through the burning mass and they were able to navigate through the danger. Within ten minutes, both sections of the tank sank. They proceeded to look for survivors and were able to rescue the radio operator, Stephen Verbonich.

Meanwhile, Captain Kretchmer, after escaping through the porthole, was searching the deck for the remaining crew members. The suction from the sinking ship began to pull him away from the bridge ladder. The captain was able to grab a couple of small boards and drifted away from the wreckage.

Second mate Matte Rand and Seaman Larson were also afloat on pieces of wreckage. Third Mate Boris A. Voronsoff and Junior Third Mate Francis M. Bacon were also clinging to wreckage and joined up with the other two. However, shortly thereafter Bacon died.

At the first light of day, the Allan Jackson was completely gone with only an oil slick left as a remembrance. Boatswain Clausen attempted signally with his flashlight was fortunately seen by the U.S. Destroyer Roe. The Roe was able to pick up all survivors. However, the tragedy of the night took its toll as only thirteen of the listed thirty-five crewmen survived. 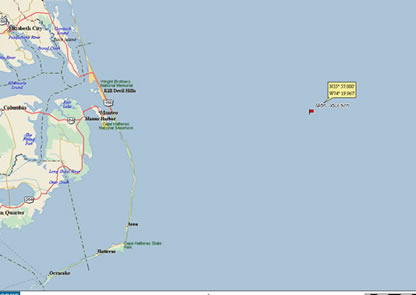 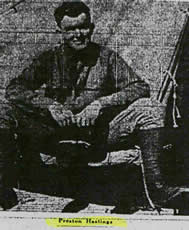 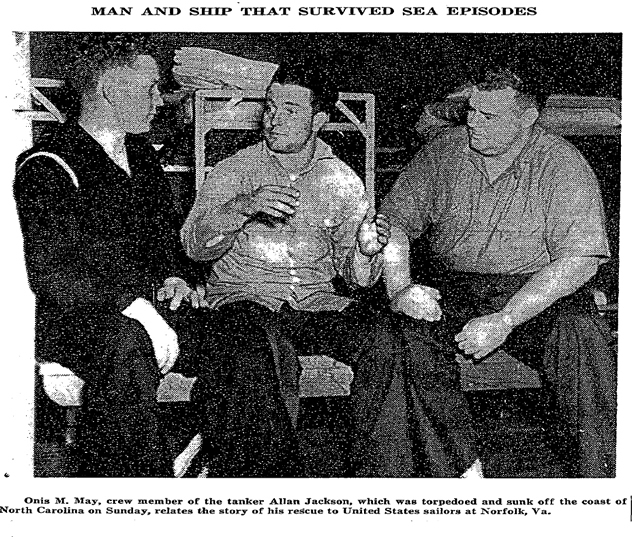