The Sinking of the  Lavinia M. Snow:

Here is one ship with various different stories. Some indicate the sinking occurred on March 7, 1930. However, in researching I came across a New York Times article (September 9, 1903) and The Federal Reporter - Volume 129 - June-July 1904 that tell a story about the schooner prior to its sinking.

On September 8, 1903, the Deutschland of the Hamburg-American Line reached Sandy Hook Lightship on the first trip it had made to the port since leaving on July 11. Apparently, she had received an overhaul and while voyaging from Hamburg, Germany on September 1, 1903, she reached Sandy Hook on September 8 at 1:20. The voyage took 5 days, 11 hours, and 54 minutes breaking her previous record by 69 minutes. The fastest time up until then was recorded by a new ship, Kronprinz Wilhelm of the North German Lloyd Line which was three minutes longer.

As the Deutschland was leaving Quarantine, the schooner Lavinia M. Snow was heading up the bay under sail when it ran into the ocean liner. As a result of this collision, the frame protecting the liner's propeller stove a hole in her bow. The schooner then scraped against the Deutschland, and her topsails and upper rigging were ripped away by the liner's rail.

This collision created quite a stir between the schooner's crew and the passengers aboard the Deutschland. In the concern that the schooner would sink, the liner lowered a boat to assist the crew of the Lavinia M. Snow. At the same time, a Hamburg-American tug was signaled and brought the schooner to Clifton, Staten Island.

On September 23, 1904, in the Southern District Court of New York, according to the Federal Reporter, a case was heard whereby the owners of the schooner, Wing, Putnam, & Burlington attempted to sue for damages.

From the Federal Reporter:

"The Deutschland, a large steamship 687 feet long, after having been passed by the health officer at the quarantine station, Staten Island, where she had been at anchor, headed downstream on account of the flood tide, undertook to swing around with her head to the ea11tward, and in doing so backed, and her propeller hood came into collision with the Snow, a small schooner which had also just been released from quarantine, and had started northward at a distance of some 130 feet astern of the steamship before the latter barked. She made an effort to get out of the way, but could not do so In time. The Deutschland had no lookout astern, and, according to the weight of the evidence, gave no backing signal. Held, that tor such reasons she was solely in fault tor the collision.

This action arose out of a collision which occurred between the libelant's schooner Lavinia M. Snow, !ad????n with lumber, and the steamship Deutschland, off a point somewhat above the Quarantine Station, Staten Island, about 8 o'clock on the morning of the 8th day of September 1903. The Snow, about 133 feet long, having been passed by the Quarantine Health Officer, was standing to the northward under reduced sail, close hauled on the starboard tack, well to the westward of the channel. Being aided by a flood tide of about 2 knots strength, she was making about 4 knots over the ground. The steamship, which had also been passed by the Health Officer, was maneuvering to get a heading up the bay so as to reach her wharf in the  North River. She was 687 feet long. The flood tide necessitated a heading down the bay on the part of the steamship while at anchor. When she became entitled to proceed, she hauled around to the north­ward, through the cast. As she was turning and headed somewhat across the channel, the collision occurred, the steamship's submerged rudder hood coming in contact with the schooner's starboard side, caus­ing such damage to the latter that she nearly sank.

The schooner charges that the collision and damages were wholly due to the steamship, in that she backed without any signals or warning: did not have a lookout properly stationed; miscalculated the force of the current and did not have a tug to aid her; did not seasonably check her sternway, am! did not keep clear of the schooner."

According to the Federal Reporter, the case was found in favor of Lavinia M. Snow. "Evidently the steamship should not have backed without seeing whether there was anything in the way of such maneuver and certainly should not have done so without signals. The faults are plain on her part and sufficiently account for the colli­sion. Decree for the libellants with an order of reference." There was no indication of what the settlement was in this case.

As to the sinking of the Lavinia M. Snow, the only information I found was that it sunk somewhere off the Durants in North Carolina. An Annual  Report of the United States Coast Guard For The Fiscal Year Ended June 30, 1930, indicates that on March 7 the Coast Guard Station at Creeds Hill rescued 6 members of the wrecked schooner Lavinia M. Snow.

Here is the location of the sinking: Somewhere near the Durants 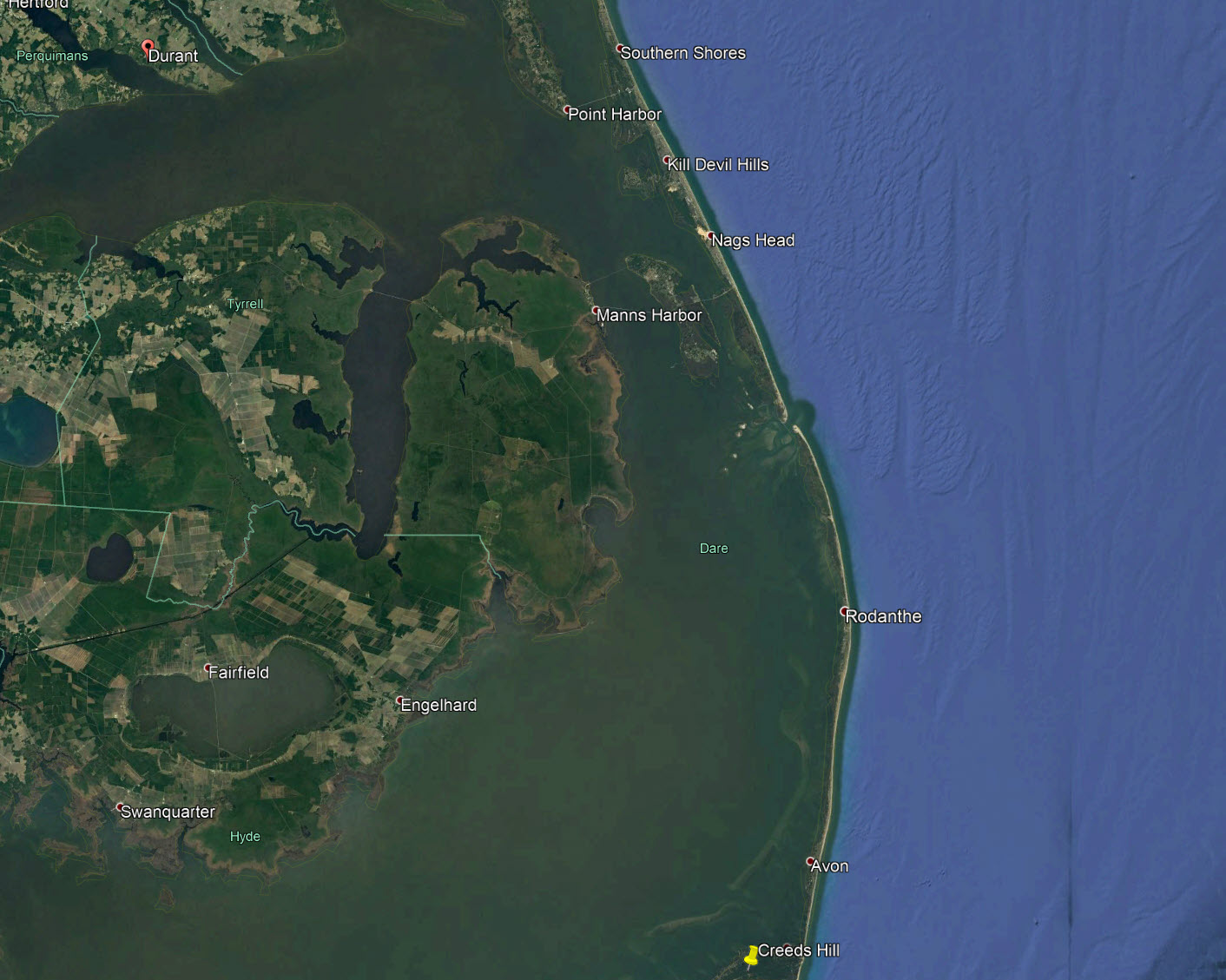